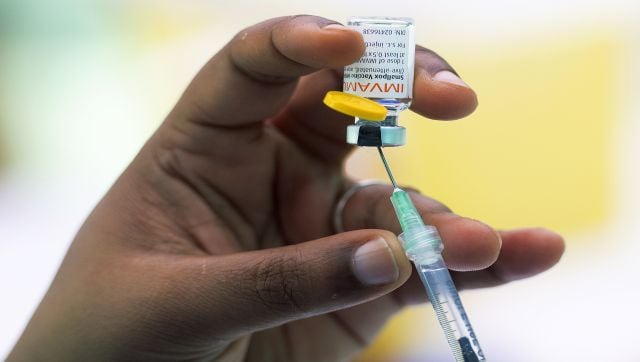 After four confirmed cases, the ICMR, India’s apex medical research institute, has invited pharmaceutical companies to develop a vaccine against the monkeypox virus. Adar Poonawalla’s Serum Institute of India has also said that it is in talks with its partner, Novovax, for a new vaccine

As of now, Europe and America are using the Imvanex shot, also known as Jynneos, made by the Danish biotech company Bavarian Nordic against monkeypox. AP

India has stepped up its guard after it reported four confirmed cases of monkeypox. While the first
three cases — the first being reported on 15 July — were seen in Kerala, the fourth case was identified in a 34-year-old man in Delhi with no history of foreign travel.

The nation fearing an outbreak has increased their surveillance and asked that all incoming patients through international airports and sea ports be screened. Furthermore, individual states are also taking measures to control any possible spread of infection.

For instance, in Uttar Pradesh, the Yogi Adityanath government has ordered the administration to reserve beds for monkeypox in COVID-designated hospitals. The officials in all hospitals have been asked to adhere to the Centre’s guidelines. Similarly, in Telangana, two isolation wards have been set up for monkeypox patients.

While curative measures are being taken by states, the Centre on Wednesday also announced that it was looking into developing new drugs, vaccines and diagnostics against monkeypox.

The World Health Organization (WHO), which declared monkeypox as a public health emergency, has stated that a strategy called ‘ring vaccination’ may help in halting the spread of the virus. This involves administering smallpox vaccines — which are thought to be effective against monkeypox because the viruses are related — to people who have been exposed to monkeypox through close contact with an infected person.

The vaccine being used is the Imvanex shot, known as Jynneos in the United States, made by the Danish biotech company Bavarian Nordic.

Explained: How monkeypox is leading to the stigmatisation of gay, bisexual men

As India confirms fourth case of monkeypox, should we be worried?

Where does India stand?

On Wednesday, the India’s apex medical research institute, Indian Council of Medical Research (ICMR), invited vaccine makers to collaborate for the development of a vaccine against the monkeypox virus.

They said that the vaccine candidate and the diagnostic kit can be developed under the Public-Private Partnership and the last date submission of the “Expressions of Interest” is 10 August.

Vaccine maker Adar Poonawalla in an interview to NDTV on Wednesday said that the Serum Institute of India (SII) would spend its own funds to import a few million doses of the Danish smallpox vaccine, which can be used to treat cases if there is a larger breakout of the infection in India.

He added that his company, SII, was also exploring the development of a new Messenger RNA (mRNA) vaccine for monkeypox along with Novavax, one of its global partners.

However, he predicted that no vaccine would be ready for another year or so.

Health experts have also stated that testing is a huge aspect in the handling of the disease.

Considering this as an opportunity, diagnostic companies are coming up with various test kits. Genes2Me Pvt Ltd, an in-vitro diagnostics (IVD) player in India on Tuesday announced to have developed a Real-Time PCR-based kit for quick detection of monkeypox virus with a fast turnaround result time of fewer than 50 minutes.

Similarly, a monkeypox viral detection kit based on RT-PCR has been created by Chennai-based Trivitron Healthcare. With a one-tube single reaction format and a one-hour turnaround time, Trivitron’s monkeypox Real-Time PCR Kit can distinguish between smallpox and monkeypox using four different colours of fluorescence.

As the fight against monkeypox begins, the Centre has issued comprehensive guidelines for monkeypox patients, contacts.

The guidelines state that patients and contacts should follow a 21-day isolation period and wear masks. Additonally hand hygiene should be followed and lesions should be fully covered.

It also stated that patients should remain in isolation until all lesions have healed and the scabs completely fallen off.

The official also said the asymptomatic contacts should not donate blood, cells, tissues, organs or semen while under surveillance.