Home India Explained: Who is Siddique Kappan, journalist arrested on his way to cover... Nearly two years after his arrest, Kerala-based journalist Siddique Kappan was granted bail by the Supreme Court. He was held in October 2020 by the Uttar Pradesh police on several charges including the draconian UAPA

Nearly two years after his arrest in Uttar Pradesh, journalist Siddique Kappan was granted bail by the Supreme Court today.

The apex court has directed the journalist to stay in Delhi for the next six weeks, following which he can relocate to his native place in Kerala.

While hearing Kappan’s bail plea, a bench of Chief Justice of India Uday Umesh Lalit and Justices S Ravindra Bhat and PS Narasimha said, “Every person has a right to free expression,” Bar and Bench reported.

According to the bail conditions, Kappan will have to surrender his passport and report to the police station every Monday, as per PTI.

Who is Siddique Kappan? Why was the Kerala-based journalist arrested in Uttar Pradesh?

Who is Siddique Kappan?

Siddique Kappan is a reporter with the Malayalam news portal Azhimukham and secretary of the Delhi unit of Kerala Union of Working Journalists (KUWJ).

Before taking up journalism, Kappan, a computer engineer, used to teach in a school in his hometown Vengara, Kerala. He then moved to Saudi Arabia for nine years, where he worked as a computer technician, as per Newslaundry.

He returned to India in 2011 when his father passed away.

Kappan decided to venture into journalism and joined Thejas in Kerala for some time.

Later, he shifted to the paper’s Delhi bureau as a reporter, as per Article 14.

He has been employed as a staffer as well as a freelancer by many Malayalam media outlets such as Thalsamayam and Azhimukham.

He has reported on current affairs, crime and politics in Delhi, Kerala and the Middle East.

As per Article 14, Kappan’s varied work includes covering 2020 Northeast Delhi riots and the NRC Act in Assam, among others.

Kappan married Raihanath in 2002 and the couple has three children– Muzzammil (19) Zidan (13) and Mehnaz (9), Newslaundry reported.

Why was Kappan arrested?

On 5 October, 2020, Siddique Kappan was arrested on his way to Uttar Pradesh’s Hathras to report on a 19-year-old Dalit girl’s gang-rape. Siddique Kappan was arrested on his way to Hathras to report on the gang-rape and murder case in 2020. PTI File Photo

The girl was allegedly gang-raped by four Thakur men from her village on 14 September 2020. She had succumbed to her injuries a fortnight later at a hospital in Delhi.

She was cremated in the middle of the night allegedly without her family’s consent.

The Hathras rape and murder case had sent shockwaves across the country.

Kappan was arrested by the Uttar Pradesh police, along with three Campus Front of India (CFI) members – Atiq-ur-Rahman, Masood Ahmed and Alam from the Mant area of Mathura.

CFI is the students’ wing of the Popular Front of India (PFI).

Kappan and the CFI members were accused of being involved in the alleged conspiracy to instigate riots on caste lines and defame the Yogi Adityanath-led Uttar Pradesh government over the Hathras gang-rape and murder case, The Wire reported.

Kappan and the three other accused were also charged under Section 153A (promoting enmity between different groups on ground of religion) and Section 295A (deliberate and malicious acts intended to outrage religious feelings) of the Indian Penal Code (IPC) and Sections 65, 72 and 75 of the Information Technology Act.

The UP dispensation, in its response to Kappan’s bail plea on 5 September, accused Kappan of having close links with the PFI.

The government also claimed that he was part of a “conspiracy to foment religious conflicts” in the country, as per Scroll.

ES Subhash, general secretary of KUWJ, had condemned Kappan’s arrest and called it a “clear attack on media freedom”, The Wire reported. 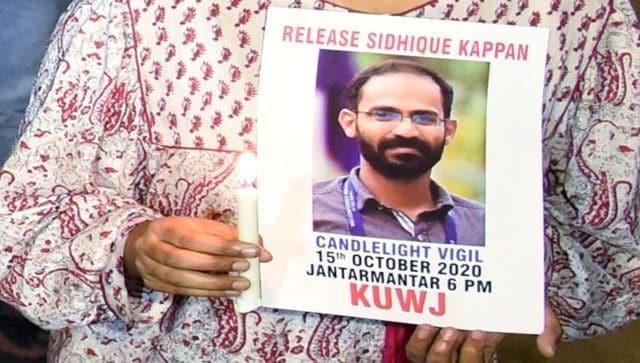 Following his arrest in 2020, several press bodies like Delhi Union of Journalists, Press Club of India, the Press Association and the Indian Women Press Corps, had demanded Kappan’s release.

The top court cited the right to freedom of speech and expression while granting bail to Kappan.

Senior advocate Mahesh Jethmalani, appearing for the Uttar Pradesh government, alleged that Kappan was part of the conspiracy by PFI to incite riots and create disharmony in Hathras.

“They were on their way to Hathras to create unrest. They were going to distribute this literature among the Dalit population. The whole propaganda was justice for Hathras victim.. then the agenda was resign prime minister and then sent emails directions…,” Jethmalani was quoted as saying by Bar and Bench.

However, the bench rejected the argument saying “sometimes protests are needed to bring a change”.