Home India Explained: Why Delhi is colder than Himachal and Uttarakhand 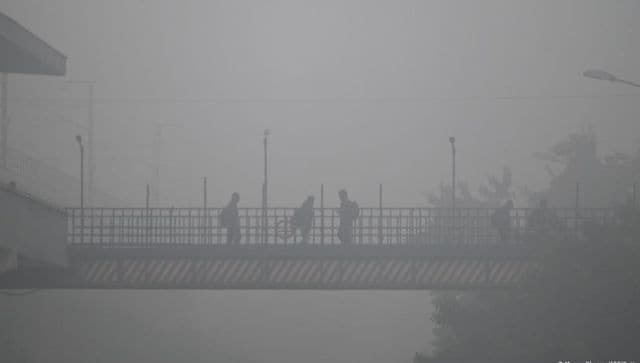 Delhi is reeling under an intense cold wave that has gripped northern India.

For the fifth consecutive day on Monday (9 January), the National Capital recorded minimum temperatures lower than those seen in some areas of Himachal Pradesh and Uttarakhand.

The dipping mercury and a deep blanket of fog have affected the reopening of schools as well as the movement of traffic, flights and trains.

How severe is the cold wave in Delhi? Why have minimum temperatures in the National Capital plummeted below those in hill stations? Let’s take a closer look.

A thick fog engulfed Delhi today, reducing visibility to just 25 metres and worsening the air quality which reached “severe” category in the city.

India’s weather agency declares a cold wave when the minimum temperature is below four degrees Celsius.

Delhi fog became one of the top trends on Twitter, with people sharing pictures of a dense layer of fog.

According to an India Meteorological Department (IMD) official, the fog decreased visibility level to 50 metres at the Palam observatory, near the Indira Gandhi International Airport, and 25 metres at the Safdarjung observatory and the Ridge weather station, reported news agency PTI.

As per the NDTV report, the minimum temperature logged at Safdarjung observatory was 3.8 degrees Celsius in the morning, slightly higher than the 1.9 degrees reported on Sunday –  the lowest in January in the past two years and the second lowest in the month since 2013.

The minimum temperatures at weather stations in Lodhi Road, Ayanagar and Ridge stood at 3.6 degrees, 3.2 degrees and 3.3 degrees, respectively.

ALSO READ: How severe is the cold wave in North India?

How cold wave has hit Delhi

Schools, which were to open today, have been closed in the National Capital till 15 January in view of the severe cold wave.

Hundreds of flights have been delayed and trains cancelled amid the heavy fog.

NDTV report said that over 150 domestic flights had to be postponed due to the bad weather.

Earlier in the morning, the Delhi Airport issued an alert, saying flight operations may be affected due to “dense fog”.

Domestic airline IndiGo asked passengers to check their flight status before leaving for the airport as the timings were impacted “due to dense fog and poor visibility” in Delhi.

Every year, thousands of homeless people in Delhi are among the worst affected due to the bone-chilling cold. Under the Winter Action Plan this time, the Delhi government has set up 15 rescue teams to bring homeless people to night shelters, as per Outlook.

However, the accommodation in shelters is insufficient compared to the number of homeless persons in the National Capital.

“Overcrowding is a big problem. Because of too much footfall, some people sleep on the roadside,” Sunil Kumar Aledia of the Centre for Holistic Development told Associated Press (AP).

The IMD warned people of road accidents due to heavy fog and advised them to drive carefully.

The weather department also urged people to “avoid or limit outdoor activities” until the mercury improves.

As per PTI, the IMD alerted that long-term exposure to dense fog may prompt respiratory issues in people suffering from asthma bronchitis and other lung-related health problems.

Why is Delhi colder than hill stations?

The cold wave conditions are likely to subside in Delhi and north India after Tuesday. PTI File Photo

“The long cold wave spell in Delhi can be attributed to a large gap between two western disturbances which allowed the chilly northwesterly winds from the mountains to affect the plains for a longer-than-usual period,” Mahesh Palawat, vice president (meteorology and climate change), Skymet Weather, was quoted as saying by PTI.

Palawat further explained that mostly there is a gap of three to four days between two western disturbances but this time the period expanded to seven days.

A western disturbance left the region by 30 December, while the next one came on 7 January, reported PTI.

Western disturbance is a weather system characterised by warm moist winds from the Middle East, says the news agency.

According to Skymet Weather report, before western disturbance approaches, it is preceded by a “warm front wherein the air is warmer”, thus leading to an uptick in mercury over the hills during winter.

While clear sky conditions and northerly cold winds plunge the temperature in Delhi in winter, the report added.

Meanwhile, the cold wave conditions are expected to abate in the coming days in northern India.

The IMD predicted “dense to very dense fog conditions” over many parts of Delhi and other states such as Punjab, Haryana, Uttar Pradesh and Bihar, till Tuesday.

After 10 January, there will be no dense fog or cold wave but isolated fog may prevail, IMD senior scientist RK Jenamani told ANI.