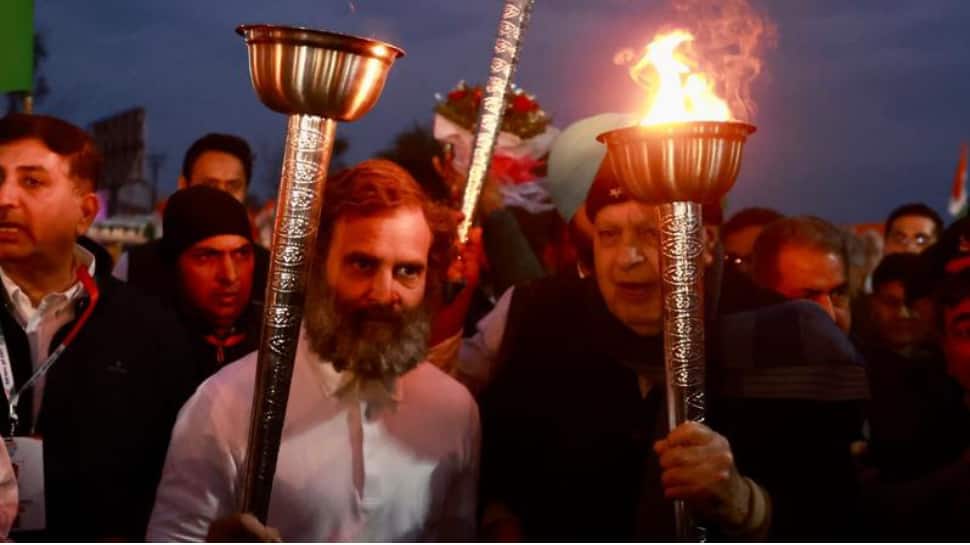 Lakhanpur: As Bharat Jodo Yatra, led by Rahul Gandhi, entered the Union Territory of Jammu and Kashmir, the National Conference leader Farooq Abdullah likened the Congress MP with the Vedic scholar, Adi Shankaracharya. This is for the second time during the foot march that Rahul Gandhi has been compared to a figure on a high pedestal — first with Lord Ram and now Shankaracharya. Drawing parallels while addressing the public meeting in Jammu and Kashmir`s Lakhanpur, Abdullah, who served as the Chief Minister when Jammu and Kashmir was a state, said that Rahul Gandhi is the first person after Shankaracharya to have undertaken a yatra from Kanyakumari to Kashmir. “Centuries ago Shankaracharya came here. He walked when there were no roads but jungles. He had walked from Kanyakumari to Kashmir. Rahul Gandhi is the second person who took out a yatra from the same Kanyakumari and is reaching Kashmir,” Abdullah said.

Adi Shankaracharya was an eighth-century Indian mystic and philosopher who consolidated the doctrine of Advaita Vedanta and made a significant contribution to unifying Hinduism by setting up four “mathas” across India.

Earlier, Congress leader Salman Khurshid had compared Rahul Gandhi to Lord Rama.Khurshid said, “Rahul Gandhi is superhuman. While we are freezing in the cold and wearing jackets, he is going out in T-Shirts (for his Bharat Jodo Yatra). He is like a yogi doing his `tapasya` with focus.”

The Congress` yatra on Thursday entered Jammu and Kashmir. The march entered the region in the Kathua`s Lakhanpur area.Supporters carried party flags and torch lights as the yatra marched ahead later in the evening (Thursday).