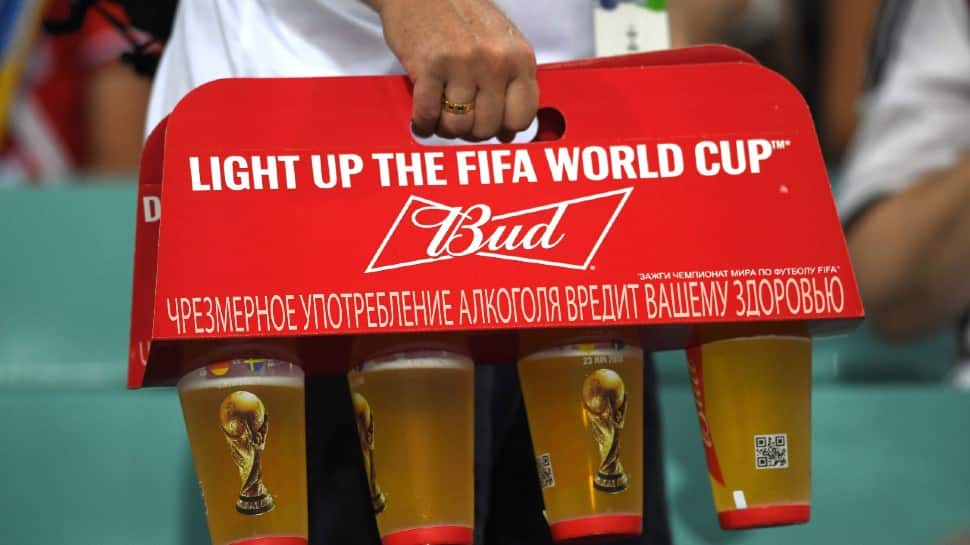 Qatar disappointed a humongous number of football fans who travelled and have planned to travel to the FIFA World Cup 2022 venue as the country announced that they have banned the sale of beer at the venue stadiums. It is a massive blow to the official sponsor Budweiser who have come out to speak about the decision stating “Beyond our control.”

The owner of American beer Budweiser on Friday said that the restrictions applied from Qatar are out of their hands.

Qatar banned the sale of beer at World Cup stadiums on Friday, a sudden U-turn on the deal it made to secure the football tournament only two days before the opening game.

The move was the latest sign of the tension of hosting the event, which is not just a sports tournament but also a monthlong party, in the conservative Muslim emirate where the sale of alcohol is heavily restricted. It’s also a significant blow to World Cup beer sponsor Budweiser and raised questions about how much control FIFA retains over its tournament. (WATCH: Cristiano Ronaldo breaks silence on retirement ahead of FIFA World Cup 2022 Qatar)

When Qatar launched its bid to host the the tournament, the country agreed to FIFA’s requirements of selling alcohol in stadiums, but the details were only released in September, just 11 weeks before the first kickoff, a suggestion of how fraught the negotiations may have been. Friday’s statement from FIFA said non-alcoholic beer will still be sold at the eight stadiums, while champagne, wine, whiskey and other alcohol will still be served in the luxury hospitality areas of the arenas.

But the vast majority of ticket holders don’t have access to those areas though they will be able to drink alcoholic beer in the evenings in what is known as the FIFA Fan Festival, a designated party area that also offers live music and activities. Outside of the tournament-run areas, Qatar puts strict limits on the purchase and consumption of alcohol, though its sale has been permitted in hotel bars for years.

“Following discussions between host country authorities and FIFA, a decision has been made to focus the sale of alcoholic beverages on the FIFA Fan Festival, other fan destinations and licensed venues, removing sales points of beer from … Stadium perimeters,” FIFA said in a statement.

Budweiser’s Twitter account tweeted: ?Well, this is awkward…? without elaborating Friday. The tweet was later deleted. Ab InBev, the parent company of Budweiser, acknowledged in a statement that some of its plans cannot move forward due to circumstances beyond our control.

The company pays tens of millions of dollars at each World Cup for exclusive rights to sell beer and has already shipped the majority of its stock from Britain to Qatar in expectation of selling its product to millions of fans. While the actual sales at the tournament might not be a significant percentage of the massive company’s revenues, the World Cup nonetheless represents a major branding opportunity.

The company’s partnership with FIFA started at the 1986 tournament, and they are in negotiations for renewing their deal for the next World Cup in North America.

Ronan Evain, the executive director of the fan group Football Supporters Europe, called the decision to ban beer sales at the stadiums in Qatar “extremely worrying.”

“For many fans, whether they don’t drink alcohol or are used to dry stadium policies at home, this is a detail. It won’t change their tournament,” Evain wrote on Twitter.

“But with 48 (hours) to go, we’ve clearly entered a dangerous territory, where assurances’ don’t matter anymore.”

Qatar, which is governed by a hereditary emir who has absolute say over all governmental decisions, follows an ultraconservative form of Islam known as Wahhabism like neighboring Saudi Arabia. In recent years, Qatar has transformed into an ultra-modern hub following a natural gas boom in the 1990s, but it has faced pressure from within to stay true to its Islamic heritage and Bedouin roots. Islam forbids the consumption of alcohol.

In the runup to the World Cup, rights groups have raised concerns about how the nation will host millions of foreign fans, some of whom might violate Islamic laws criminalizing public drunkenness, sex outside of marriage and homosexuality.

Qatar’s government and its Supreme Committee for Delivery and Legacy did not immediately respond to requests for comment. Friday’s was not Qatar’s first backtrack but it was the most significant. Last weekend, AB InBev was left surprised by a new policy insisted on by Qatari organizers to move beer stalls to less visible locations within the stadium compounds.

And Qatar also changed the date of the opening match only weeks before the World Cup began. At the 2014 World Cup in Brazil, the host country was forced to change a law to allow alcohol sales in stadiums but the same cultural issues were not at play. AB InBev’s deal with FIFA was renewed in 2011 after Qatar was picked as host.

However, the Belgium-based brewer has faced uncertainty in recent months on the exact details of where it can serve and sell beer in Qatar. And some have balked at the price, which was confirmed at $14 for a beer. At the W Hotel in Doha, where the company will be based, workers continued putting together a Budweiser-themed bar planned at the site. Its familiar AB logo was plastered on columns and walls at the hotel, with one reading: The World Is Yours To Take. (With PTI inputs)