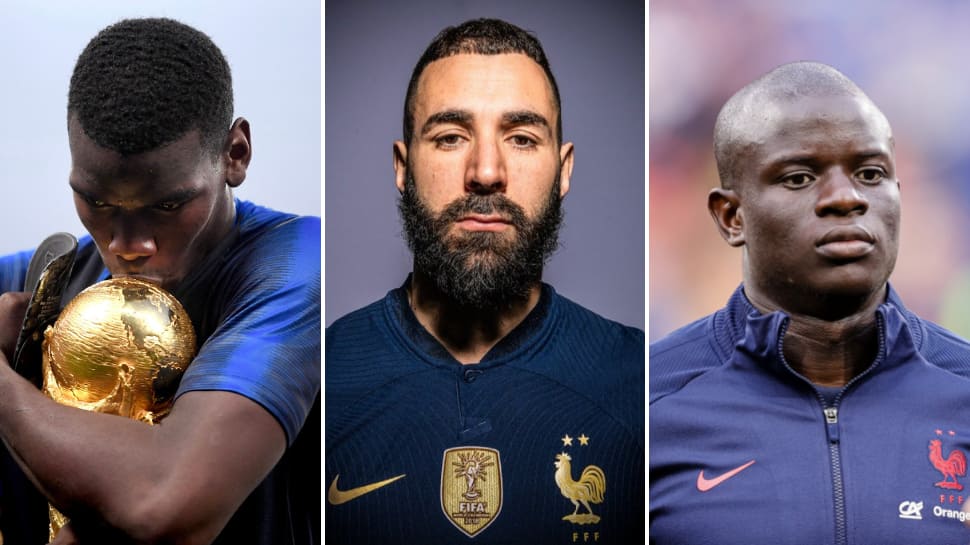 Ballon d’Or winner Karim Benzema has been ruled out of the FIFA World Cup 2022 Qatar after enduring an injury in his left thigh. As per reports, Benzema has suffered from a muscle tear during France’s training session on Saturday. The 34-year-old adds to the long injury list of superstars already missing from France squad – Paul Pogba, N’Golo Kante and more. The Ballon d’Or winner’s injury was confirmed by French Football Federation (FFF), as per Sky Sports. “Karim Benzema is out of the World Cup. After hurting the quadriceps on his left thigh the Real Madrid striker is forced to give up on taking part in the World Cup,” said FFF in a statement.

Benzema was taking part in his first full training session when he had to come off after some pain in his left thigh. “He went for an MRI scan in a hospital (clinic) in Doha, which unfortunately confirmed a tear,” the FFF added.

Benzema later wrote on Instagram: “In my life I have never given up but tonight I have to think about the team, as I have always done, so reason tells me to leave my place to someone who can help our group make a good World Cup. Thank you for all your messages of support.”France coach Didier Deschamps added:

“I am extremely sad for Karim who had made this World Cup a major objective. Despite this new blow for the French team, I have full confidence in my group. We will do everything to meet the huge challenge that awaits us.”

Ever since he clinched his maiden Ballon d’Or last month, Benzema has played less than 30 minutes for Real Madrid. He was the top scorer for the 2014 World Cup but did not play in France’s victorious 2018 World Cup campaign. Deschamps has time till Monday to call-up a replacement for Benzema. Monaco striker Wissam Ben Yedder could be an option. Forward Christopher Nkunku was injured just minutes before end of the team’s previous training session on Tuesday and was replaced by Randal Kolo Muani. Deschamps is already missing the services of midfielders Paul Pogba and N’Golo Kante, who were instrumental in France’s triumph four years back. Pogba had injured his knee in pre-season and underwent surgery in September for repairing a damaged meniscus.

Pressure on Camavinga and Tchouameni

Midfielders Aurelien Tchouameni and Eduardo Camavinga have huge shoes to fill-in as they have replace the midfield combination of Pogba and Kante. Although, both superstars are talented enough to play but France cannot afford any more injuries to their side if they want to win the World Cup.

The 29-year-old resumed training before his agent gave confirmation that he will not return to action for his national side or Juventus before the World Cup. Chelsea midfielder Kante also suffered a setback in his rehab from a hamstring injury that restricted his season to only two league appearances. He will be sidelined for four months after undergoing surgery. Injury woes do not end for Deschamps here as he has to see if his key central defender Raphael Varane is fit enough for the clash against Australia on November 23, exactly a month since he limped off for Manchester United with an injured hamstring.

France are struggling to stay healthy for the 2022 World Cup.

Also on Monday, World Cup winner and defender Presnel Kimpembe also pulled himself out of the French squad as he failed to recover enough from a six-week layoff following a hamstring injury. France still has a great attack for their match against Australia as they are likely to start with Olivier Giroud as their central striker. They will also have the 2018 World Cup star Kylian Mbappe and either Barcelona’s Ousmane Dembele or veteran Antoine Griezmann. Giroud has 49 goals for France while Griezmann has scored 42 goals. The 23-year-old Mbappe has 28 goals already. Dembele has exhibited fine form for Spanish giants Barcelona this season. (With ANI inputs)