Home Health FIFA World Cup 2022: What is camel flu, the deadlier cousin of... A virus could play spoilsport at the FIFA World Cup 2022 in Qatar. One week into the tournament, the World Health Organization (WHO) experts have warned about the spread of the deadly camel flu, also known as the Middle East Respiratory Syndrome (MERS). With close to 1.2 million football enthusiasts expected to arrive in Qatar, there are reasons to worry.

A study published in the journal New Microbes and New Infections says that camel flu is one of eight potential “infection risks”, including COVID-19 and monkeypox, which threaten the four-week-long World Cup.

What is camel flu?

First identified in Saudi Arabia in 2012, MERS is a viral respiratory disease caused by a coronavirus. It is a zoonotic virus, which means it is transmitted between animals and humans. It is linked to dromedary or one-humped camels in several Middle East, African and South Asian countries.

Camel flu is considered to be a deadlier cousin of COVID-19, having killed up to a third of those who get infected with it. Approximately 35 per cent of cases reported to WHO have died.

MERS was recently named by the WHO as one of the viruses which have the potential to start a pandemic.

Those travelling to Qatar for the FIFA World Cup 2022 have been warned not to touch camels. AFP

What are the symptoms of camel flu?

Typical symptoms include fever, cough and shortness of breath. Pneumonia is common, but MERS patients may not always develop this condition. Gastrointestinal symptoms, including diarrhoea, have also been reported among patients, according to WHO.

Severe illness can cause respiratory failure that requires mechanical ventilation or support in an intensive care unit. Older people, people with weakened immune systems, and those with chronic diseases such as renal disease, cancer, chronic lung disease, hypertension, cardiovascular disease and diabetes appear to be at greater risk of developing severe disease, WHO says.

Also read: Explained: What is ‘Disease X’ that WHO believes can cause future pandemics?

How does camel flu spread?

It is transmitted between animals and people. While studies have shown that humans are infected through direct or indirect contact with infected dromedary camels, the exact route of transmission remains unclear.

Human-to-human transmission is possible and has occurred predominantly among close contacts and in healthcare settings.

Is there a vaccine available?

There is no vaccine or specific treatment available for camel flu but several cures are in the clinical development stage. The treatment then is based on the patient’s condition.

WHO advises that those visiting farms, markets or other places where they come in contact with camels should wash their hands thoroughly before and after touching animals and avoid contact with sick animals. 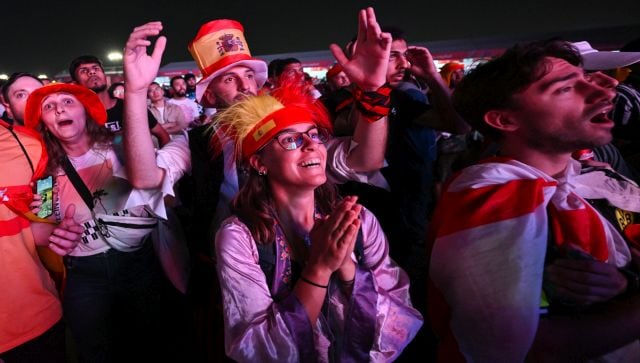 Around 1.2 million people from around the world have travelled to Qatar for the FIFA World Cup 2022 and experts have raised concerns about camel flu. AFP

How safe is camel meat?

The consumption of raw or undercooked meat and milk is risky as there is a risk of infection which may cause disease in humans. Camel meat and camel milk are nutritious products that can continue to be consumed after pasteurisation, cooking, or other heat treatments, advises WHO.

What should visitors to Qatar be wary of?

Camel rides and safari vacations are being advertised by tourism businesses in Qatar. However, travellers to the host nation have been told to avoid touching dromedary camels.

Experts have advised against drinking raw camel milk or urine or eating meat that has not been properly cooked. “To mitigate the afore-mentioned risks, visitors to the tournament should be up to date with their routine vaccinations and observe the rules for safe consumption of food and drinks,” the study said.

It said that Qatar had made its health sector ready for occurrences of camel flu but continued surveillance was required to stop the transmission of the disease.

According to researchers, the large crowd at the FIFA World Cup 2022 poses potential infectious disease risks for players, fans, locals and the countries of the team’s origin. The adoption of any trade, travel, or entrance screening measures connected to MERS-CoV is not advised by the WHO, reports Livemint.

Has Qatar seen an outbreak in the past?

Since 2012, 2,600 cases of MERS, with 935 associated deaths were reported in 27 different countries, according to a United Kingdom-based science website IFLScience. Data from Qatar has shown the occurrence of 28 cases of MERS (incidence of 1.7 per 1,000,000 population) and most cases had a history of contact with camels.

The largest outbreaks have occurred in healthcare facilities in Saudi Arabia, the United Arab Emirates, and South Korea. Approximately 80 per cent of human cases have been reported by Saudi Arabia, says WHO. Cases identified outside the Middle East are among individuals who appear to have been infected in the region and then travelled outside.