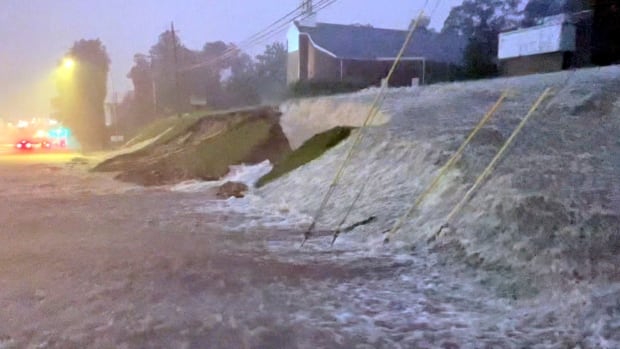 Terrified drivers climbed out of swamped cars and muddy floodwater flowed through neighbourhoods after a stalled weather front drenched Alabama for hours, leaving entire communities under water Thursday and killing at least four people, with more storms to come.

Dozens of people had to be rescued Wednesday night in central Alabama, where the U.S. National Weather Service said as much as 33 centimetres of rain fell, and a south Alabama town temporarily lost its main grocery store when a creek came through the doors of the Piggly Wiggly.

Near the coast, heavy rains caused sewage to bubble out of underground pipes.

Metro Birmingham remained under a flash flood watch for much of the day until storms moved into Georgia. Another seven and a half centimetres of rain could fall there and in western South Carolina by nightfall, according to the weather service, which also said the Florida Panhandle could get doused.

Searchers found the bodies of a boyfriend and girlfriend, both 23, inside a car that was swept away by a fast-moving stream in the Birmingham suburb of Hoover, said Shelby County coroner Lina Evans.

The deluge produced wild scenes on social media: floodwaters flowing between Christmas trees inside a Lowe’s store in Hoover, refrigerator bins full of brown water in a home and dozens of cars with their headlights submerged.

Some of the worst flooding happened in Pelham, outside Birmingham, where 82 people were rescued from homes and more than 15 were pulled from vehicles after rain caused creeks and streams to overflow their banks, the Pelham Fire Department said early Thursday.

More than 100 rescuers were involved in the effort, as were 16 boats, the statement said.

“Water was coming in the car so fast I had to bail out the window,” said Jill Caskey, who watched Thursday morning as a tow truck hauled her SUV away from a Pelham parking. The car stalled as she was trying to navigate floodwaters during the deluge.

A police officer helped her to high ground and Caskey’s husband picked her up. It took them three hours to travel a few miles home because of flooded roads.

Though Caskey said she’s heard the weather safety mantra of “turn around, don’t drown,” she said it “happened so fast I didn’t have time to think about it.”

The Alabama deluge comes about seven weeks after flooding killed more than a dozen people in Tennessee. Such floods may be more common in the future because of global warming, scientists say.

Federal research has found that man-made climate change doubles the chances of heavy rains like the ones that swamped Baton Rouge, La., with 66 centimetres of rain in 2016, killing a dozen people and damaging 150,000 homes.

In south Alabama near the Florida line, water-covered streets in the flood-prone Escambia County towns of Brewton and East Brewton inundated a shopping centre and sent as much as one metre of water into the Piggly Wiggly, and two schools had to cancel classes.

To the south, in Baldwin County, officials as much as 946,000 litres of waste water overflowed from sewage systems along Mobile Bay.