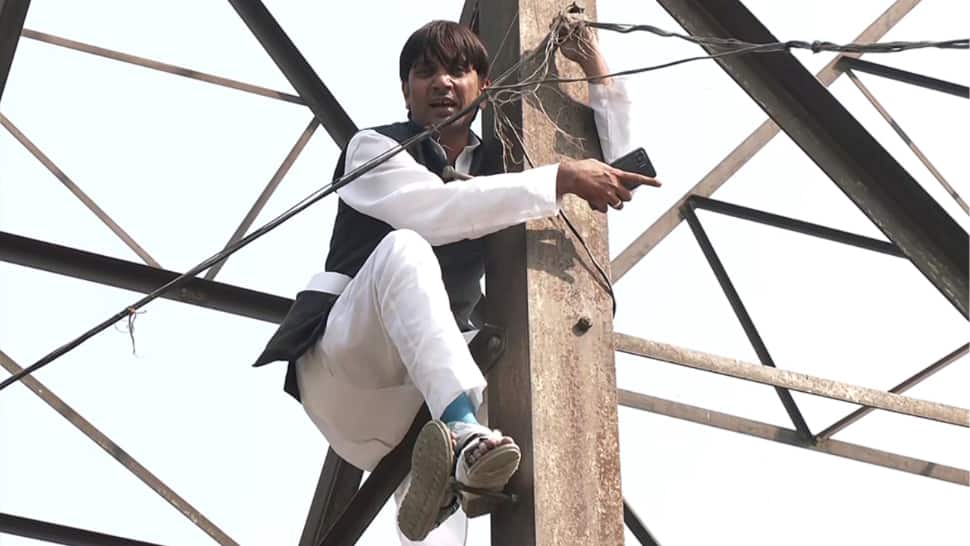 New Delhi: Angry over being denied a ticket for the upcoming Delhi municipal polls, former AAP councillor Haseeb-ul-Hasan on Sunday climbed an electricity tower and alleged that the party leaders had “sold” the tickets for Rs 2 crore to 3 crore. Naming Atishi, Durgesh Pathak and Sanjay Singh, he alleged that the senior leaders took his original documents on the pretext of fielding him in the polls and refused to hand them back to him.

“AAP leaders have taken my original documents, including my bank passbook, on the pretext of giving me a ticket but they are not returning the documents. Tomorrow is the last day to file the nominations. If anything happens to me or if I die, Durgesh Pathak and Atishi will be responsible,”

Hasan said in a live video on social media from atop the tower in Gandhi Nagar.

“Atishi, Durgesh Pathak and Sanjay Singh sold the tickets for Rs 2 crore to Rs 3 crore. They are all corrupt leaders. They returned my documents only after I climbed this tower,” he told reporters after getting down.

The former AAP councillor said he will file his nomination papers soon after deciding “whether to fight the elections independently or switch over to some other party”.

There was no immediate reaction from the AAP.

Fire officials said they received information that a person had climbed an electric tower at 10.51 am.

Police personnel, along with officials from the fire brigade and BSES, and ambulances reached the spot and requested Hasan to climb down. He eventually agreed, a senior police officer had then said.

The AAP announced its first list of candidates on Friday and the second list of 117 candidates the next day.

The 250-ward MCD goes to polls on December 4 and the counting of votes will take place on December 7.