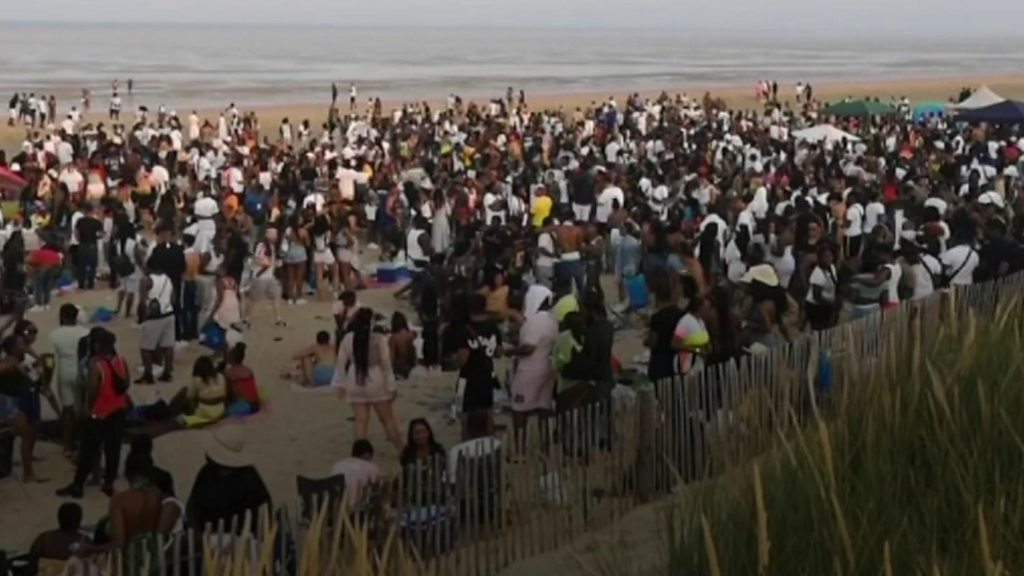 Four police officers were hurt when a gathering on a beach ended in violence, the Kent force has said.

The party for underprivileged London youth was held at Greatstone beach near New Romney but more people than expected turned up, organisers said.

Police said a fight broke out at about 21:00 BST on Sunday, when the officers were injured and a 29-year-old London man was arrested.

Pictures of the event and rubbish left behind have circulated on social media.

Twitter users described an event with “thousands of people, police unable to do anything, no masks, no social distancing”.

On Facebook, people posted pictures of waste and described the scenes as “absolutely disgusting”.

Organiser Wayne Williams, who runs Croydon restaurant Flavour Boss, said about 200 people, aged 16 to 24, had bought tickets and were taken to the coast in three coaches for a day out.

He said: “These are kids who have never ever gone beyond London… [let alone] to the beach.”

But he said while details of the barbecue had been removed from social media, “more people turned up from all over”.

Mr Williams said organisers tried to work with police and hold the event at Camber Sands in East Sussex but after permission was refused the group ended up at Greatstone.

Organisers used a microphone to remind people to socially distance, he said.

Mr Williams has offered to pay to clear up the beach.

He said he believed the event had been unfairly criticised, adding: “When Camber Sands has 30,000 people, nobody talks about Camber, but they talk about black people on the beach. We feel this is racist.”

Mr Williams said his coaches left Greatstone before the fight broke out.

Kent Police said the event had been planned but officers were not made aware of the exact location.

Supt Simon Thompson said: “Our officers responded to calls regarding a large group of people on Greatstone beach and remained in the area throughout the day to ensure those gathering were following guidelines.”

Rother council said it initially gave permission for a private barbecue for 20 people on Camber Sands, but when it came to light a much larger event was planned, the organiser was told it was not possible because of coronavirus guidelines and the need for detailed operational planning.

Folkestone council leader David Monk said no permission was granted by the council and the council was not in contact with organisers before the event went ahead at Greatstone.

He said: “The sheer amount of rubbish left behind is disgusting. Our waste crews have been on site all morning and continue to work hard to clean the area.”

Mr Monk said the council had contacted the organiser and was considering legal action.