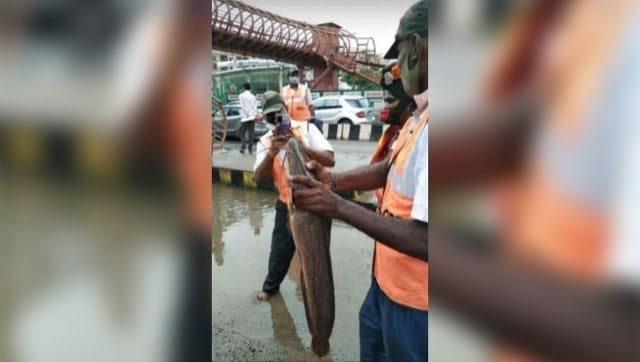 A Twitter user posted a picture in which a civic volunteer can be seen holding what appears to be a river catfish, while his colleague takes its photo with a mobile phone

A civic volunteer holds a catfish in Bengaluru. Twitter/@sleepyhead148

Heavy rains have wreaked havoc on Bengaluru. The city has received 369.9 mm of rainfall in the last 30 days, as per Deccan Herald. The heavy rains in the city on Tuesday turned roads into rivers. Rescuers helped evacuate stranded residents from their flooded homes in parts of Bengaluru. Amid this, a fish was caught by a civic volunteer ‘on the road’.

A Twitter user posted a picture in which, a civic volunteer can be seen holding what appears to be a catfish, while his colleague takes its photo with a mobile phone. The photo was tweeted with the caption, “Come to Bangalore. You get fresh catch in the middle of the road now!”. Look at this photo here:

Come to Bangalore. You get fresh catch in the middle of the road now! pic.twitter.com/uIdTX5jIF7

The image went viral in a matter of hours. One user commented, “You get dinner on the road now?”.

You get dinner on th road now???? @YashDont

“Ahhh, finally I can buy a fishing rod and cross out fishing on my bucket list.”, another joked.

Ahhh, finally
I can buy a fishing rod and cross out fishing on my bucket list.

It's not a joke anymore!

According to some users in the comment section, this picture is from Ecospace in the Bellandur area.

Next to Ecospace gate 1. Atleast going by the direction the camera is facing

The Karnataka government has stated that it will be sending a proposal seeking a relief of Rs 1,012.5 crore to the Centre as per the National Disaster Response Fund (NDRF) norms. The government will also ask the Centre to appoint an inter-ministerial team to assess the damages caused by rain, floods and landslides in the state, according to Karnataka’s Revenue Minister R Ashoka.

As estimated by the Karnataka government, the losses due to rain in the state have been Rs 7,647.13 crore since June. As per reports, 96 people have died and three have gone missing since June due to the rain-related incidents.

Karnataka has received 820 mm of rainfall since 1 June, which has affected 27 districts and 187 villages, and impacting almost 30,000 people. As per the news agency PTI, 9 mm rainfall has been recorded in the span of 24 hours, affecting 20 villages in Ramanagara, Chamarajanagara and Mandya districts.