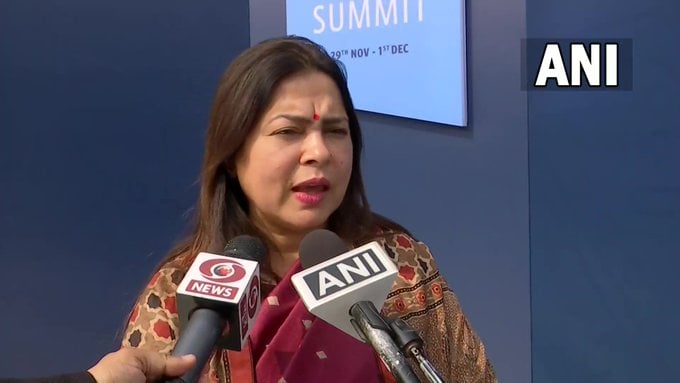 Union Minister of State for External Affairs and Culture Meenakshi Lekhi in New Delhi on Wednesday.

New Delhi: Making a pitch for ease of doing business in India and the digital infrastructure that the country can provide to foreign investors, Union Minister of State for External Affairs and Culture Meenakshi Lekhi on Wednesday said that after assuming the G20 presidency the country will take a leading role in forming the new global order with its civilizational values.

“India is assuming G20 presidency. India is showing its might and transforming the world with its civilizational values. Digital infrastructure of India has shown the world how inclusion can happen and that’s leading to good governance and ease of doing business,” Lekhi said.

India is assuming G20 presidency. India is showing its might & transforming the world with its civilisational values. Digital infrastructure of India has shown the world how inclusion can happen that’s leading to good governance & ease of doing business:Union min Meenakashi Lekhi pic.twitter.com/81PzSR0PBM

Digital issues and several reforms of multilateral financial institutions are among the focus areas for India’s upcoming G20 presidency, the minister reiterated.

India’s G20 presidency that will officially begin from 1 December, will focus on bridging the digital divide, especially in developing countries. It will also aim at ensuring greater benefits from digital technologies and transformation, Prime Minister Narendra Modi had earlier said at the G20 Summit held in Bali in November.

India is taking over the presidency of the influential grouping from Indonesia, which held the chair till November 2022. India will host the next summit in New Delhi in September 2023.

Among the many expectations that the developed nations of the world have from India’s tenure at the helm is that of digital inclusion. At the last summit, India urged the G20 leaders to pledge that they will work together for digital inclusion over the next decade.

PM Modi has outlined that the principle of ‘data for development’ will be an integral part of the overall theme of India’s presidency. In his keynote address at the Bali Summit of the G20, the PM put forward his mantra of ‘One Earth, One Family, One Future’.

India has in the past pointed out that G20 leaders are responsible for ensuring that benefits of the digital transformation are not be confined to a small part of the human race and are shared with developing countries.