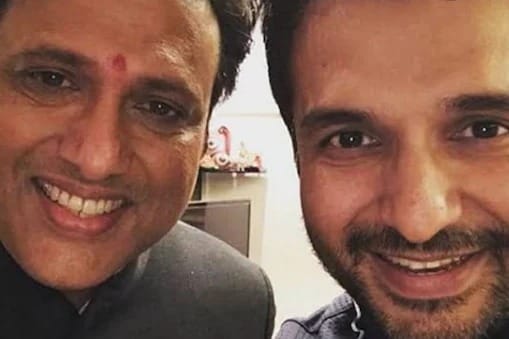 Bhojpuri actor Vinay Anand, who is Govinda’s nephew, has shared a throwback picture with the Bollywood star on his Instagram page. In the selfie, the duo can be seen smiling as they pose for the camera. Along with the photo, Vinay wrote a long note in which he cleared the air about his bond with his uncle and also slammed certain sections of the media who have been spreading rumours about their relationship.

Vinay wrote that though his relationship with Govinda is not too good, it’s not “bad either”. He explained that since there is a lot of “age difference” between them, his uncle “is a father figure” for him and so he is “scared of him”. While looking at Govinda’s “position, talent and work”, Vinay feels quite “small” in front of him.

The Bhojpuri star further added that he respects his uncle a lot and he will always remain his teacher. He revealed that whatever “acting and dance” he knows, it is only because he has grown up seeing Govinda’s films. He said if a child insists on buying an “ice cream” and if the elders do not buy it for them, it doesn’t mean the elders are bad. They are always the well-wishers of the young ones.

Appreciating Govinda’s humble nature, Vinay clarified that he wishes to “move forward with a pure heart” and a positive outlook. Slamming the media for their controversial reports, he said he won’t be able to stoop so low in his career and life. He wants to survive in the film industry only with his hard work and the love of his friends and fans. He ended his note by apologising in advance in case he has hurt anyone’s sentiments through his statement.

Recently, a few media portals reported that the actor blamed Govinda for not supporting him when he was struggling in Bollywood. Vinay had debuted with the 1999 film Lo Main Aa Gaya which tanked at the box office. After working in a few more projects in Bollywood, he switched to Bhojpuri cinema.

Currently, Vinay has several projects lined up, including Bhojpuria Mein Dum Ba, in which he will star alongside Sanjay Pandey and Manoj Singh Tiger. He also has Teri Ankho Mein Jaadu Hai in the pipeline in which he will be seen sharing the screen space with Rani Chatterjee and Pakkhi Hegde.