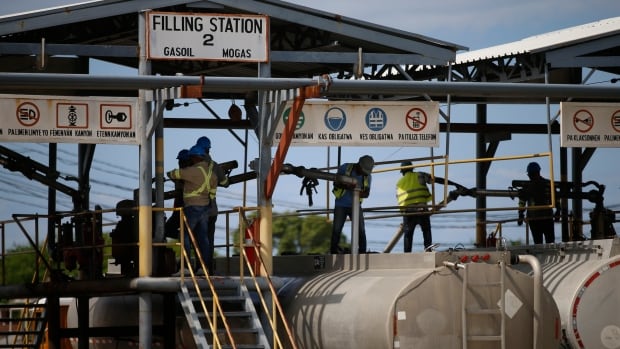 Excitement echoed through the streets of Port-au-Prince early Saturday as gas stations opened across Haiti for the first time in two months after a powerful gang lifted a crippling fuel blockade.

“There’s gas now! There’s gas now!” people yelled as they honked their horns and motorcycles zoomed past, as Haiti’s capital slowly returned to its familiar cacophony.

Sweat rolled down people’s brows as they pushed their cars and motorcycles to the nearest gas station and lined up next to colourful mini buses known as “tap taps” emblazoned with messages including “Thank you Jesus.”

“I would call this the day that life begins again,” said Davidson Jean-Pierre, 35, who owns a small house-painting business.

He and his employees could finally get around Haiti with ladders and other bulky equipment that couldn’t be easily transported on the handful of motorcycles that remained in circulation during the blockade.

“My team is going to get back on their feet,” Jean-Pierre said.

Ever since a gang federation known as G9 seized control of an area surrounding a key fuel terminal in mid-September, life in Haiti became paralyzed, leaving millions of people like Jean-Pierre temporarily out of work.

The move — aimed at trying to oust Prime Minister Ariel Henry after he announced a rise in gas prices — forced gas stations to close, hospitals to cut back on critical services and businesses including banks and grocery stores to limit their hours. It also worsened a cholera outbreak that has killed dozens and sickened thousands, with companies unable to distribute potable water.

Earlier this week, nearly 400 trucks lined up at the newly freed Varreux terminal in Port-au-Prince, filling up their tanks with fuel as a heavily armed police convoy escorted them to gas stations in the capital and beyond.

The truck drivers arrived after the G9 gang, led by former police officer Jimmy Cherizier — nicknamed “Barbecue” — announced a week ago that it was lifting the blockade days after clashing with police who sought to reassert control of the area.

After three years without cases, cholera is spreading through Haiti’s poorest neighbourhoods as they struggle for access to clean water. At the same time, nearly five million Haitians are facing acute hunger. Gangs have seized the majority of Haiti’s capital, a critical fuel terminal, and the nation’s politics remain unstable after the assassination of the president in July last year. It’s these compounding crises that have led the unpopular current government to call for international intervention from the US, Canada and the UN – a controversial move in a country with a long history of foreign meddling. Today on Front Burner, independent Haitian journalist Harold Isaac explains how citizens are enduring yet another desperate situation, and why they’re starting to feel like they’re on their own.

“I don’t know how long it’s going to last,” said Arnel Fildor, 28, who also was concerned about high gas prices and a crushing economic crisis driven by double-digit inflation that has pushed this country of more than 11 million people into even deeper poverty. “Not everyone is equal. We don’t have the same ability to survive. We’re all dying slowly here.”

During the blockade, a rare gallon of gas on the black market was going for a minimum of 4,000 Haitian gourdes ($37 Cdn), a price that Jean-Pierre refused to pay, worried it might have been mixed with other liquids.

On Saturday, he planned to buy gallons of water and fill up his propane gas tank, basic errands that were impossible during the blockade.

Meanwhile, tap tap drivers like Marc Andre, 40, said that while it was a relief gas stations reopened, they worried about high fuel prices and its impact on their livelihoods, with passengers unable to pay the full fare.

“They raised the gas at the wrong time, when the economy is not functioning,” he said. “It’s going to be pretty hard on the people who don’t have anything. The gasoline looks like a saviour, but at the same time, it’s going to bring hardship for a lot of people.”

Tap tap driver Jean Joel Destin, 39, said the government doesn’t understand what he has to endure to make a living in Haiti.

“You don’t have anyone to turn to,” he said.