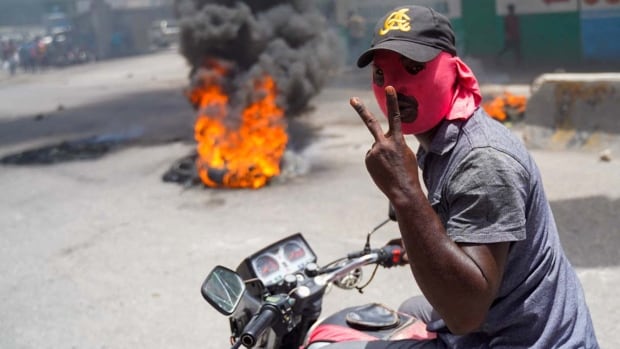 Gangs throughout Haiti’s capital and beyond have grown more powerful since the July 7, 2021, assassination of president Jovenel Moïse.

A year after the unsolved murder, many people have tried to flee a country that seems to be in economic and social freefall. Attempts to form a coalition government have faltered, while efforts to hold general elections have stalled.

Kidnappings have skyrocketed and increasingly violent turf wars have shut down the main roads leading to the country’s northern and southern regions.

Police also have been trying to quell recent gang violence in the capital’s Cite de Soleil slum, where the UN says more than 470 people have been killed, injured or disappeared in the span of one week. Another estimated 3,000 people have been forced to flee their homes in that neighbourhood.

“We need a lot of help,” said Jean Michelet, a 16-year-old who said he was wounded on the day that the gang battles erupted in early July.

“I was home on the day the war started. It was a lot of shooting. A bullet went through the roof and it hit me in the head,” he said.

He said a nun took him to a hospital to have the injury treated.

Michelet said a lot of people had been killed during the gunbattles.

“The situation is really bad,” he said.

Roosevelt Zamor, prosecutor for the Croix-des-Bouquets region, told The Associated Press that important documents were set on fire and that authorities shut down the partially burned courthouse located northeast of Port-au-Prince.

The fire occurred in a region controlled by the 400 Mawozo gang, whom authorities blame for killing a police inspector on Sunday inside a church in Croix-des-Bouquets and later setting the building on fire.

“Police have been working day and night to try to stabilize the community,” Zamor said in a brief interview.

A video posted on social media showed alleged gang members surrounding the slain police officer as they show his ID on camera and later cut off his hands and shoot up his body, with the suspected gang leader saying it was retribution for the officer supposedly killing motorcycle drivers associated with the gang as he threatened to kill another policeman.

The courthouse fire occurred a month after another gang raided the Court of First Instance in downtown Port-au-Prince, looting and burning case files and pieces of evidence. The gang still retains control of a portion of that courthouse.

The United Nations has warned that Haiti’s National Police needs immediate help to fight crime and violence even as the United States and other countries continue to provide training and resources to help strengthen an agency that has only 12,800 active police officers serving a country of more than 11 million people.

Jeremy Laurence, spokesperson for the UN Human Rights Council, said most of the victims “were not directly involved in gangs” but were targeted by them.

The UN agencies said some gangs even deny access to drinking water and food in order to control the population, aggravating malnutrition.