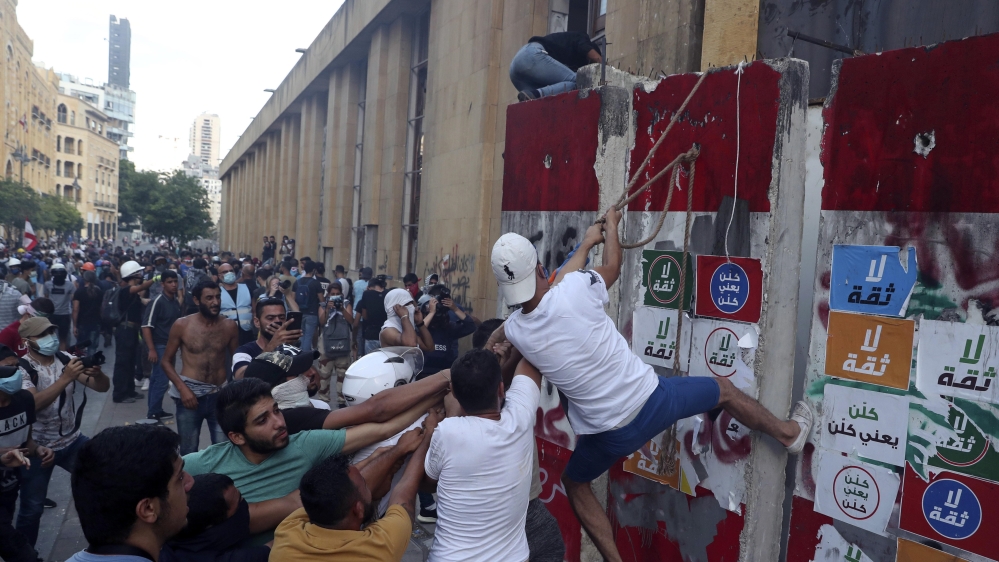 The Beirut port explosion is likely to go down in history as a turning point in Lebanon’s political configuration.

The blast, which killed more than 200 people, injured more than 6,000 and destroyed large parts of the city, has revitalised the Lebanese protest movement which had been trying to remove the entire political class since October 2019. Last year, when the economy finally collapsed under unbearable debt and mismanagement, many Lebanese people realised they had become pauperised, dispossessed and marginalised in their own country, forced to survive on their own, with few basic services from the government and little hope for the future.

The tens of thousands of citizens in the streets since August 7 have demonstrated new heights of distrust and anger at their government, whose incompetence and disregard for the people’s wellbeing had allowed the port explosion to happen. The mock hangman’s nooses set up during the protests clearly express the citizens’ sheer disgust with the political elite who have long ruled them and have driven them and the entire economy into bankruptcy and debt.

The attacks on and takeovers of ministries and public institutions demonstrate that people want to take direct control of governance and would not allow the same uncaring, thieving, and criminally negligent politicians to take back the reins of power.

The consistent protest slogan “all means all” has been re-emphasised and people have expressed their anger with all political forces. The protesters also made rare explicit criticism of Hezbollah as a member of the sectarian rulers they called “the mafia” or “a gang of thieves and criminals”. Hezbollah leader Hassan Nasrallah joined President Michel Aoun in rejecting an international investigation of the port explosion and also sounded like all the other discredited politicians in saying his party knew nothing about the ammonium nitrate that exploded in the port.

The events of the past few days have started to sweep aside the cruel recent past to reveal the few power centres in the country that will now battle it out, or, more likely, negotiate a transition to a new governance system.

We are likely to see new waves and methods of citizens confronting their state, and the state fighting back militarily, until this battle is resolved in the months ahead. This week, for example, citizens demanded that foreign donors do not channel humanitarian assistance through the government, who they fear might steal or sell the aid, or only share it with sectarian loyalists.

The citizen rebellion has sent its ominous message and revealed cracks within the governing elite. On August 9, a number of members of parliament and government ministers resigned under pressure from the streets. A day later, the rest of the cabinet along with hapless Prime Minister Hassan Diab stepped down, simply formalising their lack of authority in the face of the citizenry.

Lebanon is experiencing the same dynamics as other Arab countries have since 2010: the irresistible force of an enraged and pauperised citizenry marching in the streets to bring down a power structure that refuses to budge. Yet, like in Sudan, Algeria, Syria, Egypt, Iraq, and elsewhere, Lebanon’s exhausted and humiliated citizens have struggled against an entrenched militarised regime which is not easy to evict from power.

But Lebanon’s power structure is unlike any other Arab country’s and it is even more difficult to challenge. The main sectarian parties of Sunni, assorted Christians, Druze, and others have shown that they will retreat a bit and reconfigure power-sharing when threatened, if it keeps them in the governance and money-making game.

Last year’s events discredited the main sectarian parties in the eyes of most Lebanese, including some of those parties’ own supporters, whose standard of living has also deteriorated. These parties on their own now appear unable to prevent the demands for structural change. Parties like President Aoun’s Free Patriotic Movement and Saad Hariri’s Future Movement can only rule with the backing of Hezbollah, as we have seen in recent years.

Hezbollah represents something very different. It is more powerful than the state militarily, and more cohesive than any other single sectarian organisation. It is also structurally linked with Iran, Syria, and other militant parties in a regional “resistance” front. Hezbollah mostly operates behind the scenes through shifting alliances with leading Christian, Shia, and Sunni groups in the successive governments it has supported.

We might have entered a phase in Lebanon where, effectively, the two most powerful actors have emerged as Hezbollah and the mass of uncoordinated but probably unstoppable protest movement which wants to replace the current power structure with a more democratic and rule-of-law-based governance system.

If the protesters harness their immense popular support into a focused political process, they could eventually engage and remove the existing power elite, and then hold parliamentary elections that independent groups would oversee – two of their key demands. We should expect to see intense negotiations to agree on a new, non-sectarian elections law that would permit new elections, in turn leading to a new president and a fully re-furbished governance system. This would ideally be managed by a transitional emergency government of respected technocrats focused on stabilising the economy and supporting the majority of needy people.

Many of the now discredited sectarian elite will oppose this, but Hezbollah would probably accept it if it met certain criteria. The group will not allow the Lebanese state to crumble and it does not want to rule Lebanon on its own; at the same time, however, it will not surrender its sophisticated arms and capabilities that twice forced Israel into ceasefires and have achieved deterrence on the Israeli-Lebanese border.

So the big challenge for the protesters and all Lebanese now is: can the citizenry and Hezbollah work out a compromise agreement that allows a serious, capable government to assume power for a long transitional period that can start the revival of the country, while keeping Hezbollah’s arms off the negotiating table for now? And if this happens, and the day comes when the Lebanese people demand Hezbollah give up its autonomous military capabilities, is it possible to envisage those capabilities incorporated under the defence ministry and an associated border security system?

Many Lebanese have pondered these and other possibilities for many years, but no consensus has been reached. This has allowed the old bankrupt governing system to remain in place for so long, with Hezbollah’s backing, leading to the country’s shattered condition. This legacy of corrupt and inept officials in the foreground with Hezbollah and its external supporters in the background has now reached its end for most Lebanese people.

The moment of reckoning has arrived. The political elite has nothing left to steal from its people, the people have no more patience and want to hang all political leaders, and Hezbollah must define a new strategy that serves it and the rebelling people of Lebanon equally well.

Finding the answer to this riddle can no longer be the object of abstract discussions. Lebanon has no other choice but to go through with reconfiguring its political system and eventually incorporating Hezbollah into the national defence network. The elite has repeatedly failed and the people have risen up more than once. They will not stop until they have regained their dignity and their citizenship, and established a functioning state.

The views expressed in this article are the author’s own and do not necessarily reflect Al Jazeera’s editorial stance.

Wimbledon: How Russia’s war on Ukraine will affect world tennis