Home India Top Story How Bok scrumhalf stayed in the zone against All Blacks: ‘Needed to... 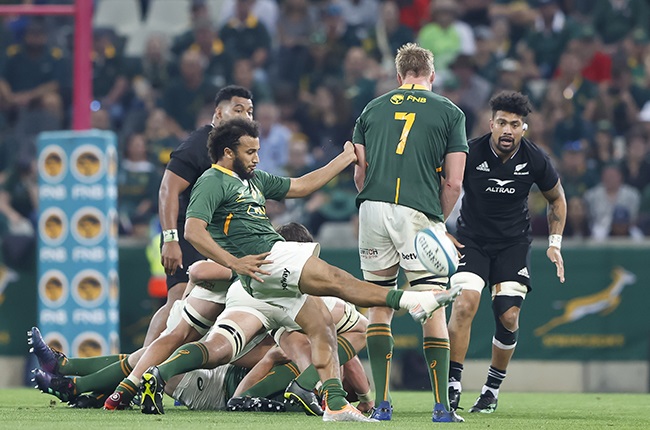 Springbok scrumhalf Jaden Hendrikse didn’t imagine he’d be called onto the field after only 40 seconds, but the halfback said he was quickly in the zone.

Faf de Klerk’s freak injury – when his head collided with Caleb Clarke’s knee in one of the game’s first moments – meant Hendrikse was pressed into service far earlier than expected.

What he gave the Boks was assured service and clear decision-making as South Africa won 26-10 to register their first win against the All Blacks at home since 2014.

Hendrikse said he was in the zone as he realised his dream of playing against the men from New Zealand.

“I didn’t expect to be on that early, to be honest. There were a lot of messages that were coming to me when I came on,” Hendrikse said. “Mine was to stay in the zone because it’s a privilege playing against the All Blacks. You dream of playing against them when you’re a kid.

“It was a massive honour and for me, it was about doing my job.”

It also helped that the Mbombela crowd, aided by the stadium’s excellent acoustics, ratcheted up the sounds to scarcely believable levels.

Hendrikse, as much as the crowd was firmly behind him, admits he needed to quieten down the noise in his head to make sure his job was done.

“I knew there was going to be a lot of noise, so for me, it was about coming on and doing my job,” Hendrikse said.

“I needed to stick to what I do and what works for me. We’re about effort in the Springboks and you have to show a lot of it.

De Klerk’s head injury was such that he lay still for a few moments before being stretchered off.

By the 19th minute, however, he was back on the side of the field but had failed a head injury assessment.

READ | Bok coach Nienaber reacts to triumph over All Blacks: ‘We’re not the finished product’

Hendrikse was a quarter of the way into his unexpected 79-minute shift when De Klerk’s return lifted his spirits.

“I was so happy when Faf was back on the field because when he came off the field, it was looking very bad,” Hendrikse said.