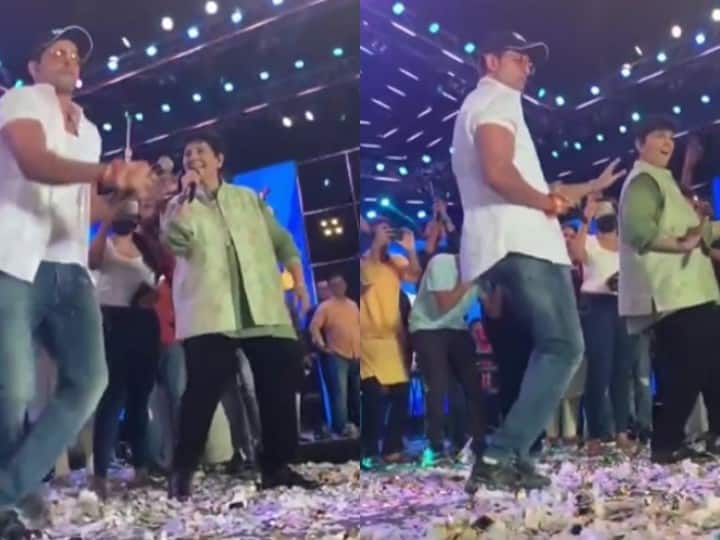 Hrithik Roshan along with Vikram Vedha writer-directors Pushkar & Gayatri, producer Shibasish Sarkar arrived at one of the biggest Navratri events in Mumbai as guests of honor.

The actor also asked for the blessings of the audience for his film ‘Vikram Vedha’. Greeting Falguni Pathak on stage, Hrithik Roshan said, “Falguni ji main aapka bohot bada fan hoon. Kya aap mere saath 2 (garba) steps karengi?”. The veteran singer was quick to suggest that she cannot match steps with Hrithik like his film songs. To which Hrithik requested her to lead and he will follow her along with the audience.

The garba night event turned into a night full of smiles for the audience who witnessed two legends on stage together, with the evergreen singer Falguni Pathak & India’s most loved dancer Hrithik Roshan performing garba together.

Check out Hrithik and Falguni matching steps together in this video:

Amidst a housefull audience cheering & hooting, Hrithik & Falguni Pathak thanked the audience for their love.

Hrithik Roshan & Saif Ali Khan are seen promoting their film ‘Vikram Vedha’ and have been leaving no stone unturned to express their love & gratitude to their audience. After hosting multiple fan events in Mumbai, Hrithik & Saif visited Delhi and Gurgaon last week.

‘Vikram Vedha’ has released in theatres worldwide to unanimous positive reviews and a strong word of mouth by the audience. The film has been witnessing growth across it’s 3 days since release. So, the Pushkar and Gayathri directorial, which is a remake of its original Tamil version by the director duo, has managed to gross around Rs 38 crores at the box office.