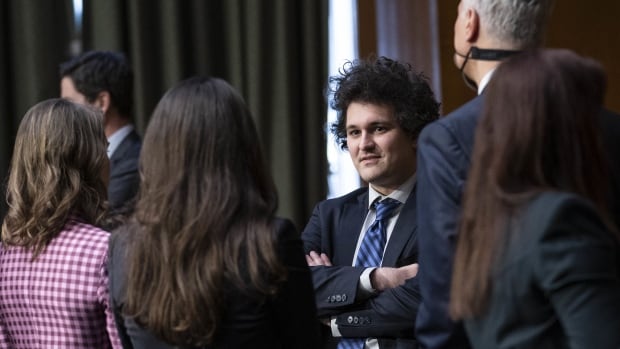 The man at the centre of collapsed cryptocurrency exchange FTX made his first public appearance since the saga began, telling a New York audience on Wednesday that it was never his intention to commit fraud.

Sam Bankman-Fried, the 30-year-old founder of FTX, appeared at the New York Times’ Dealbook Summit on Wednesday, for an interview with journalist Andrew Ross Sorkin about what happened to cause his cryptocurrency firm to collapse into bankruptcy earlier this month.

The firm, once worth more than $32 billion US, entered bankruptcy protection on Nov. 11 after a whirlwind series of days that saw it go from trying to solve a liquidity crunch by merging with a rival, to having that deal fall apart and succumbing to a run on the bank as traders pulled out $6 billion in funds within three days.

Filings show the company owes almost $10 billion to various creditors, and at least $1 billion worth of customer deposits are missing.

Among numerous allegations, customer deposits at FTX appear to have been used as capital and collateral for loans for Bankman-Fried’s personal investment firm, Alameda — an allegation that amounts to fraud, and one that he pushed back against strongly.

“I didn’t ever try to commit fraud on anyone,” he told Sorkin. “I didn’t knowingly co-mingle funds.”

While he acknowledged mistakes were made, Bankman-Fried rejected repeated attempts to characterize what happened at his cryptocurrency firm as being in any way malicious or illegal.

“I am deeply sorry about what happened,” he said. “I was excited about the prospects of FTX a month ago, I saw it as a thriving, growing business.”

He says, to his knowledge, there are enough funds at FTX to give users their money. But his hands are tied since he no longer has a formal role at the company since it entered bankruptcy proceedings.

“I believe that withdrawals could be opened up today and everyone could be made whole,” he said.

Bankman-Fried has been active on Twitter since the debacle began, but his appearance on Wednesday marks his first public appearance since the saga began.

There was speculation he was going to appear in person, but ultimately he appeared via video link from the Bahamas, where he lives.

Sorkin asked Bankman-Fried if he did not appear in person because he is worried about being within the reach of U.S. agencies including the Department of Justice and the Securities and Exchange Commission, both of which are probing what happened at FTX.

Bankman-Fried appeared to side-step that question, remarking instead that, to his knowledge, he can still legally enter the U.S.

“I’ve seen a lot of the hearings that have been happening [and] would not be surprised if some time I am out there talking about what happened,” he said.

He also said his legal team is “very much not” supportive of his decision to appear at the summit and speak publicly about what happened at FTX. His lawyers advice was “to recede into a hole,” he joked.