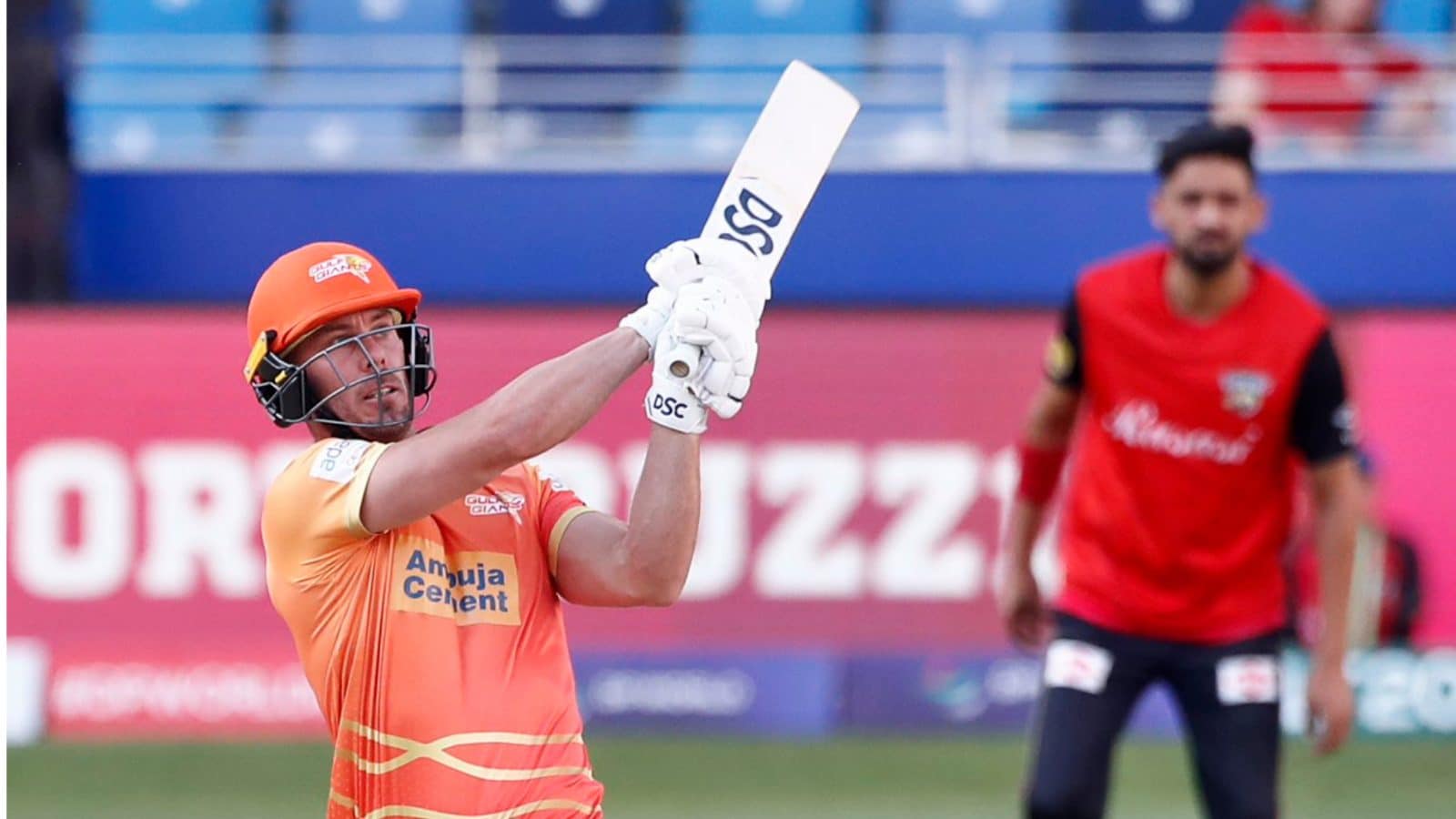 Aggressive knocks from Chris Lynn and Shimron Hetmyer helped Gulf Giants chase down Desert Vipers’ mammoth score of 195 for 4 to extend their winning streak in the 12th match of the DP World International League T20 at the Dubai International Stadium on Sunday.

Also Read: After His Half Century, Ex-Cricketer Reiterates ‘Shouldn’t Worry Too Much About Rohit Sharma’

Gulf Giants had won the toss and elected to bowl. Desert Vipers openers Rohan Mustafa and Alex Hales scored steadily with Mustafa scoring two boundaries off the second over from Liam Dawson. Hales, after hitting Richard Gleeson for two boundaries in the third over, went on to hit David Wiese for a boundary and a six to long-off. The fourth over saw Hales in full flow hitting Chris Jordan for three boundaries and a six to take 19 runs off the over. The pair put on 54 runs in just five overs.

Mustafa hit Lawson for a six to long-on and even reverse swept him for another boundary but fell to the fourth ball of that over stumped by wicketkeeper Tom Banton for 23. Hales reached his half century in 26 balls. It was his fourth consecutive score of over fifty runs from all the four matches that Vipers played in this tournament. Skipper Colin Munro, who joined Hales, hit Dawson and Rehan Ahmed for sixes. Desert Vipers recorded 104 for 1 at the half way stage.

Gulf Giants expected David Wiese to provide the breakthrough but Munro hit him for two consecutive boundaries in the 12th over. While Munro reverse swept Ahmed for a boundary, Hales slog swept him for a six. Fourteen runs were hit off Ahmed’s over. In the 14th over, Gleeson forced Munro to hit straight to Sanchit Sharma for 39. Hales and Munro had added a 67 runs partnership in 44 balls for the second wicket. Hales continued to hit sixes off Ahmed to mid-wicket and long-on taking the score past the 150-run mark in 15 overs. Sherfane Rutherford too joined the six-hitting act by getting one off David Wiese to deep mid-wicket.

While on 99, Jordan dismissed Hales, caught by Hetmyer at deep cover. Next man Tom Curran got bowled by Wiese for a duck and the chances of a total of over 200 began to diminish. Wiese gave away only four runs in the 18th over. Gleeson, who bowled the penultimate over, gave away just a boundary. Rutherford hit the last ball of the innings from Jordan for a six over long on and remained unbeaten on 27 for a total of 195 for 4 in 20 overs. The last five overs yielded only 38 runs.

Faced with the challenge of having to score at a run rate of 9.75, Gulf Giants lost their prolific run getter and captain James Vince to the fourth ball of the first over. Vince played Sheldon Cottrell on to his wicket for 4. Lynn who joined opener Tom Banton went for his shots, hitting Gus Atkinson for two consecutive boundaries and Tom Curran for a mighty six. Curran struck in the fourth over having Banton brilliantly caught by Munro at mid-off running back and judging well for 3. Next man Rehan Ahmed got out stumped by Billing off Wanindu Hasaranga for 1.

Three wickets down for 35 in five overs, Lynn on 24, who miscued a lofted shot, got dropped by Rutherford off Curran. Shimron Hetmyer hit Hasaranga for three consecutive sixes to take 23 runs off the seventh over. He also hit Benny Howell for two mighty sixes. When Lynn too hit Hasaranga for two sixes, Gulf Giants posted 106 for 3 by the half way mark needing another 90 runs to win. Lynn reached his half century in 28 balls while Hetmyer recorded his half century in 26 balls.

Desert Vipers re-introduced Cottrell for the 14th over and Hetmyer hit the first two deliveries for a boundary and a six but fell to the third delivery caught by wicketkeeper Billings for 70.

David Wiese joined Lynn with Gulf Giants needing 49 runs from 39 balls. Hasaranga bowled a tight 15th over giving away just three runs. Atikinson forced Lynn on 71 to play on to his wicket when 34 runs were needed in 22 balls. David Wiese (22n.o) and Liam Dawson (16n.o) took up the challenge and steered their team to the target with three balls to spare.

Speaking about their performance, Gulf Giants’ Shimron Hetmyer said, “We have to remember what we are doing well and continue to keep doing that in the future. My mind was clear when I walked into bat. I thought that if we could get 40 runs in the powerplay then we would get to our target. I knew that anything could have happened with just one good partnership.”

Meanwhile, Desert Vipers’ head coach James Foster said, “The Gulf Giants bowled exceptionally well during the last four overs of our innings. They used the big boundary to their advantage. I thought Gleeson was outstanding. We showed high levels of quality today, but ended up on the wrong side of the result. They put us under pressure with the bat and at times you just have to tell the opposition well played.”

IND vs AUS: ‘No One Can Replace Rishabh Pant’s Desire to Dominate Bowlers’ – Ian Chappell