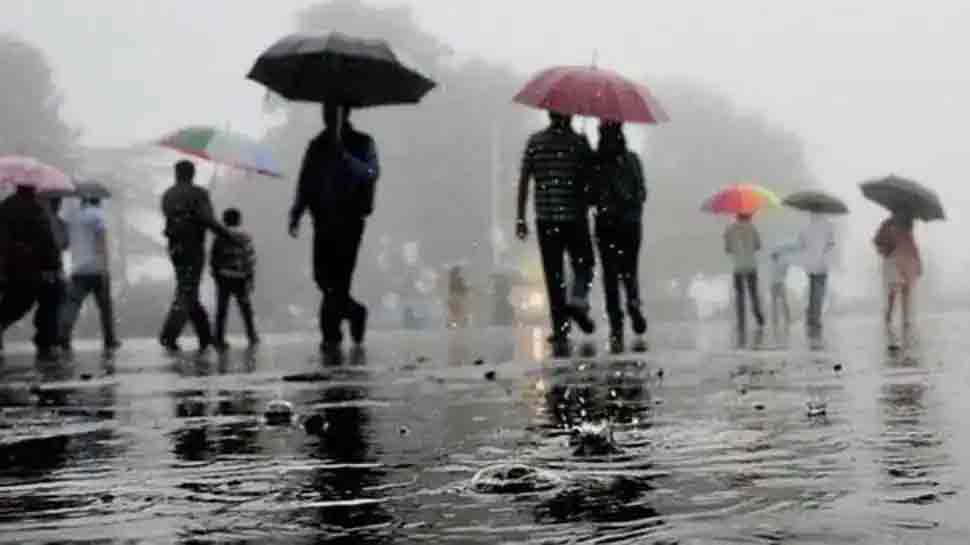 New Delhi: The western and central parts of the country will continue to witness heavy rains over the next three-four days, the IMD said on Wednesday while issuing a ‘Red’ alert for Mumbai, predicting heavy to very heavy rainfall in the country’s financial capital. The India Meteorological Department (IMD) also issued an ‘Orange’ alert for Maharashtra’s East Vidarbha region, which includes districts such as Bhandara, Chandrapur, Gadchiroli and Yavatmal, indicating the likelihood of heavy to very heavy showers.

However, the intensity of rainfall over north India is likely to decrease after 24 hours, the Met office said. Alerts by the IMD are colour-coded from green to red. A ‘green’ alert stands for ‘no warning’ and the forecast is of light to moderate rain. A ‘red’ alert stands for ‘warning’ and asks authorities to ‘take action’. An ‘orange’ alert indicates that the authorities are expected to ‘be prepared’.

An IMD release said “a cyclonic circulation lies over Northwest Bay of Bengal and extends between 3.1 km and 7.6 km above mean sea level tilting southwestwards with height”. “Under its influence, a low-pressure area is very likely to form over northwest Bay of Bengal and neighbourhood during the next 48 hours. Hence, the monsoon is expected to remain active over Vidarbha from July 21-23,” it added. Nagpur, the largest city in the Vidarbha region, recorded 25.6 mm rainfall in a 24-hour period ending at 5.30 pm.

The Marathwada region of Maharasthra is also expected to receive widespread showers till Thursday and the rain intensity is likely to reduce subsequently, the IMD said, adding that there is an offshore trough running between Maharashtra and Karnataka, which generally carries moisture-laden westerly winds from the Arabian Sea to land. Widespread rainfall with isolated heavy to very heavy rain is likely to continue over the west coast, the adjoining interior areas and the Gujarat region for the next four-five days, the IMD said.

On the other hand, the intensity of rainfall over northwest India is likely to reduce further after 24 hours, it said. Light to moderate rainfall at scattered places over Delhi is very likely in the next 24 hours. The rainfall is likely to increase from July 25, the IMD said. Parts of Delhi received light rains on Wednesday. The national capital recorded a maximum temperature of 34.7 degrees Celsius, while the minimum temperature settled at 22.4 degrees Celsius. Delhi recorded 60.3 mm rainfall in a 24-hour period ending at 8.30 am.

It received 69.6 mm and 38.4 mm rainfall on Sunday and Monday respectively. According to the IMD, good spells of monsoon rain over the last few days have covered the rain deficit in the capital. Meanwhile, around two dozen people continued to be stranded after a series of landslides occurred along the Tanakpur-Ghat national highway in Uttarakhand’s Champawat district following heavy rains. Landslides occurred at eight points along the highway on Tuesday, bringing mounds of debris onto the road and leaving around 150 people stranded at various places.

Chief Minister Pushkar Singh Dhami visited the cloudburst-hit villages of Uttarkashi district for an on-the-spot assessment of the situation and assured the affected people of all possible help from the government.

Seven people were killed and two injured in different incidents of wall and roof collapse following incessant rains in Sitapur district of Uttar Pradesh, officials said, adding that three members of a family, including two minors, were killed by lightning strike in Rae Bareli district.

Light to moderate rain and thundershowers occurred at most places in the state, while heavy rain lashed isolated places, the IMD said. Rainfall was reported from Kheri, Bareilly, Barabanki, Sitapur, Gorakhpur, Bahraich, Banda, Aligarh and Maharajganj, it added.

The IMD has forecast rain and thundershowers at most places of the state on Thursday and warned that thunderstorm accompanied with lighting is very likely at isolated places.

The maximum temperatures hovered around the normal limits at most places in Haryana and Punjab on Wednesday. Following rains for the last two days, mainly dry weather prevailed in most parts of the two states.

Mamata in Delhi pitches for ‘Opposition Unity’, says country will lead, we will follow