Home Middle East In the face of dramatic territorial gains by Ukraine, Russia is saying... 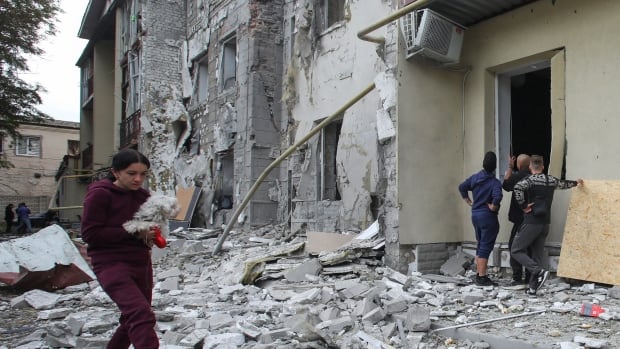 The Kremlin said on Monday that Russia would achieve all of its aims in the military operation in Ukraine, its first public response to dramatic Ukrainian gains on the battlefield in the Kharkiv region.

Kremlin spokesperson Dmitry Peskov declined to answer directly, when asked by a reporter if President Vladimir Putin had confidence in his military leadership, replying that the “special operation” would continue until it had achieved its goals.

“The military operation continues,” Peskov said. “And it will continue until the goals that were originally set are achieved.”

Peskov went on to say that Putin is in constant contact with military commanders in Ukraine, and is regularly briefed on military developments.

Asked if Putin would order a general mobilization in response to Ukraine’s counter-offensive, Peskov referred the question to the defence ministry.

It was the first reaction from the Kremlin to the lightning Ukrainian counter-offensive last week.

Ukraine’s general staff said early on Monday that its soldiers had recaptured more than 20 towns and villages in just the past day, after Russia acknowledged it was abandoning Izium, its main stronghold in northeastern Ukraine.

Joyful residents returned to former front-line villages and Moscow grappled with the consequences of the collapse of its occupation force in northeastern Ukraine.

“People are crying, people are joyful, of course. How could they not be joyful?” said retired English teacher Zoya, 76, north of Kharkiv in the village of Zolochiv, 18 kilometres from the Russian frontier. She wept as she described the months she had spent sheltering in the cellar.

Ukraine’s military has taken back a reported 3,000 square kilometres of territory from Russian occupation in a few short days after a swift counteroffensive in the northeastern part of the country. It marks a major shift in the war after months of attrition.

Ukraine denounced what it described as retaliation against civilian targets for its military advances. By Monday morning, Reuters journalists in Kharkiv said the power was back on, although the water was not yet working. The regional governor said power had been restored by 80 per cent.

But Ukraine’s swiftest advance since driving Russian forces away from the capital in March could turn the tide in the six-month war, unravelling in a matter of days many of the gains Moscow had achieved in months of costly fighting in the east.

Further north, Ukrainian troops had moved into Udi, a hamlet in what had been no-man’s land closer to the frontier. Soldiers returning from there said it was still unsafe, littered with landmines, grenades and weapons left behind by fleeing Russian troops, with abandoned farm animals wandering about.

In what remained of Russian-held territory in Kharkiv region, Vitaly Ganchev, the Russian-installed head of Moscow’s occupation administration, acknowledged that Ukraine’s troops had broken through to the frontier.

Ganchev, who has ordered the complete evacuation of civilians from Russian-held parts of the province, told Russia’s state-owned Rossiya-24 television that about 5,000 civilians had escaped to Russia but the frontier was now shut.

“The situation is becoming more difficult by the hour,” he said.

Ukrainian forces have retaken about 500 square kilometres of territory in the south of the country in the past two weeks as part of a counter-offensive against Russian troops, a spokesperson for Ukraine’s southern military command said on Monday.

Reuters could not independently verify the comments.

So far, Putin has not resorted to mobilizing Russia’s reserves, which number around two million people with military service within the past five years.

Peskov in his comments said Russia saw no prospect of peace talks with Ukraine.

He said there were no discussions taking place about the possible demilitarization of the Zaporizhzhia nuclear power plant — one of the International Atomic Energy Agency’s (IAEA) key recommendations from its visit to the plant.

The view of the war from inside Ukraine varies depending on where you are. For two weeks, CBC News senior correspondent Susan Ormiston has been crossing the country where the war has become a normal part of life for some. In the capital of Kyiv, businesses are re-opening, communities are rebuilding, and some who fled at the start of the war have returned. Meanwhile, in Kherson and Kharkiv, fierce fighting continues as Ukraine’s counteroffensive reportedly ramps up. The Ukrainians say they’re making good progress, but Russia denies this, saying Ukraine is suffering heavy losses. An ongoing media blackout makes it hard to get a clear picture. Today on Front Burner, Susan Ormiston shows us the complicated reality in Ukraine as the war grinds on.

Britain’s ministry of defence said Russia had probably ordered its forces to withdraw from all of Kharkiv region west of the Oskil River, abandoning the main supply route that had sustained Russia’s operations in the east.

The British ministry said Moscow’s forces were also struggling to bring reserves to the front line in the south, where Ukraine has launched a big advance in Kherson province aiming to isolate thousands of Russian soldiers on the west bank of the Dnipro River.

“The majority of the [Russian] force in Ukraine is highly likely being forced to prioritize emergency defensive actions,” the British update said. “The rapid Ukrainian successes have significant implications for Russia’s overall operational design.”

Further Russian retreats, especially east of the Oskil, could soon put Ukrainian forces in position to attack territory that Russia and its local proxies had held since 2014.

“At the very least, we have stopped the enemy at Lyman,” he said in a post on Telegram overnight, referring to a front-line city east of Izium. “We’ll have to see how that develops. But our boys have had clear successes.”