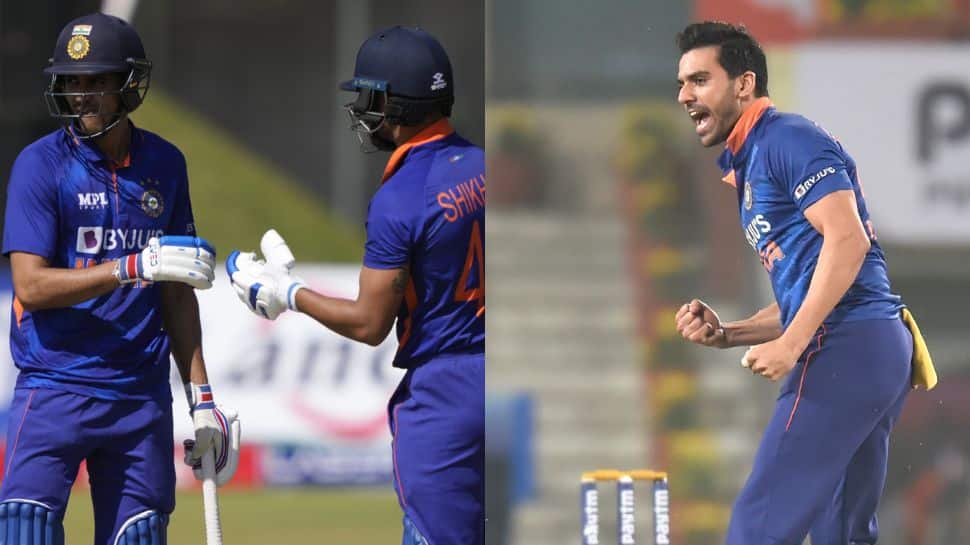 KL Rahul-led India outplayed Zimbabwe in all three departments of the game to register a thumping 10-wicket victory at the Harare Sports Club here and take a 1-0 lead in the three-match ODI series. Chasing a paltry 190, the Indian team got off to a flying start as Shikhar Dhawan started the innings with consecutive boundaries of the first two balls. His partner at the other end Shubman Gill also looked in control as Zimbabweans looked clueless with the ball.

A brilliant comeback for @deepak_chahar9 as he is adjudged Player of the Match for his bowling figures of 3/27 __#TeamIndia go 1-0 up in the three-match ODI series.#ZIMvIND pic.twitter.com/HowMse2blr
— BCCI (@BCCI) August 18, 2022

The Dhawan-Gill duo notched up a 50-run partnership for the opening wicket in 11.2 overs. Southpaw Shikhar Dhawan notched up his half-century in 76 balls, his third in the last four ODIs. The opening pair took the team’s total beyond the triple-figure mark in 19.1 overs as India looked on course to chase down the target with considerable ease. Shikhar Dhawan went on to go past 6,500 runs in ODIs.

Shubman Gill made the most of the opportunity, as he did in West Indies, by notching up his third ODI half-century. All of these have come in his last four matches. Riding on the strong performance of the openers, India reached the 150-run mark in just 25.2 overs. Gill accelerated after scoring his fifty and there was no looking back for him as he outscored his opening partner Dhawan.

Earlier in the day, KL Rahul won the toss and opted to bowl first and the bowlers did not disappoint. Comeback bowler Deepak Chahar dismissed Innocent Kaia for 4 caught behind by wicket-keeper Sanju Samson. The hosts lost their first wicket for 25 in the seventh over.

In his next over, Chahar struck again dismissing Tadiwanashe Marumani for 8, caught behind by keeper Samson for 8. Pacer Mohammed Siraj too joined the party as he sent Sean Williams packing for 1 caught by Shikhar Dhawan. Chahar struck for the third time to dismiss Wessly Madhevere for 5 to leave the hosts tottering at 31 for 4.

Captain Regis Chakabva and Sikandar Raza then struck a partnership to take Zimbabwe’s total beyond the 50-run mark. The 35-run partnership was finally broken by Prasidh Krishna as he dismissed Raza, caught by Dhawan for 12. Half of the Zimbabwe team was back in the pavilion for 66.

Krishna struck for the second time dismissing Ryan Burl for 11, who was caught by Shubman Gill. Captain Chakabva and Luke Jongwe struck a partnership to take the team’s total beyond the triple-figure mark. The 22-run partnership between the two was broken by left-arm spinner Axar Patel as he dismissed Chakabva for 35. In the next over he dismissed Luke Jongwe’s leg before wicket for 13 to leave Zimbabwe struggling at 110/8.

Brad Evans and Richard Ngarava then struck a much-needed partnership for Zimbabweans to take the team’s total beyond the 150-run mark. The duo also struck a 50-run partnership and kept fighting.

The 60-run partnership was finally broken as Krishna got his third success and the hosts lost their ninth wicket in the form of Ngarava. Axar Patel too struck for the third time to dismiss Victor Nyauchi for 8 as India bowled out their opponents for 189. Brad Evans remained unbeaten on 33 off 29 balls as Zimbabwe set India a 190-run target.

India also put up a strong fielding performance with the fielders quick on their toes and lapping up all the catches.