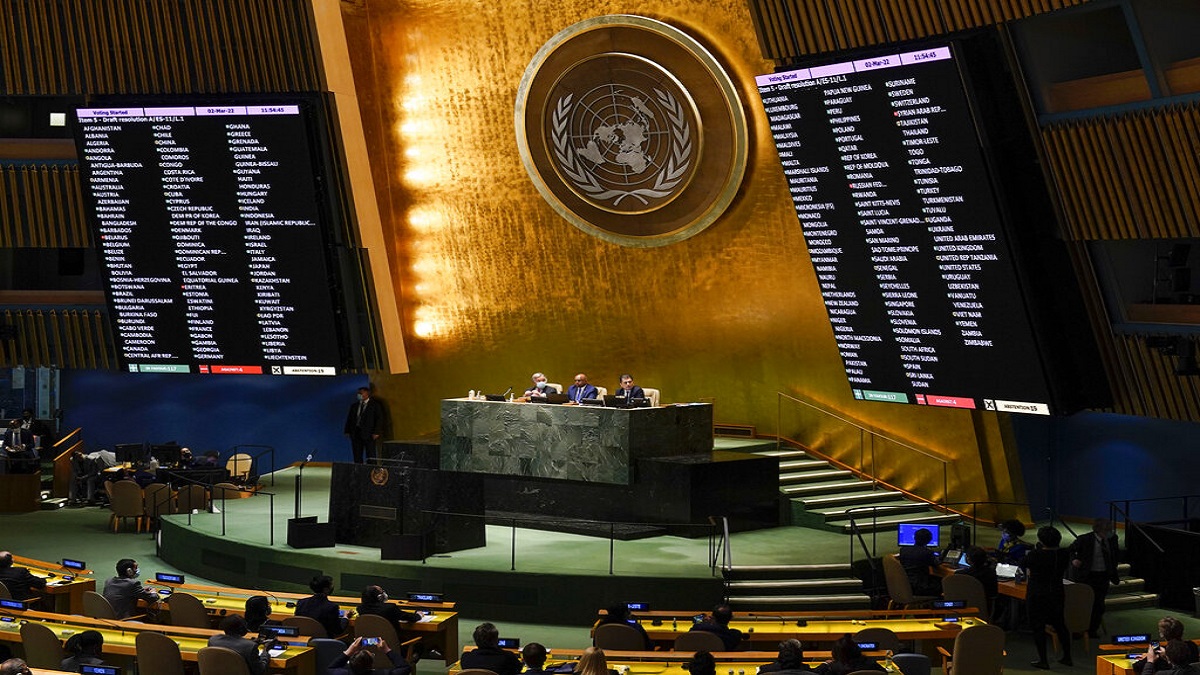 The United Nations General Assembly (UNGA) on Monday approved a resolution in favour of holding Russia accountable for invading Ukraine while violating various international laws including repatriation and remedy mechanism for damages created by Russia’s invasion of Ukraine. The vote in the 193-member world body was 94-14 with 73 abstentions. It was close to the lowest level of support received by any of the five Ukraine-related resolutions adopted by the General Assembly since Russia’s Feb. 24 invasion of its smaller neighbor.

The resolution recognizes the need to establish “an international mechanism for reparation for damage, loss or injury’” arising from Russia’s “wrongful acts” against Ukraine. It recommends that the assembly’s member nations, in cooperation with Ukraine, create “an international register” to document claims and information on damage, loss or injury to Ukrainians and the government caused by Russia. Before the vote, Ukraine’s U.N. Ambassador Sergiy Kyslytsya told the assembly that “Russia has tried its best to destroy Ukraine — in a very literal sense.”

He cited Russia’s bombing and shelling of cities and villages, “targeting everything from plants and factories to residential buildings, schools, hospitals and kindergartens” as well as roads, bridges, railways and almost half of Ukraine’s power grid and utilities in the last month alone. He also cited accounts of atrocities committed by Russians in territory it occupied, including murder, rape, torture, forced deportations and looting. “Ukraine will have the daunting task of rebuilding the country and recovering from this war,” Kyslytsya said. “But that recovery will never be complete without a sense of justice for the victims of the Russian war.”

In establishing a mechanism to document claims, he said, “Ukraine is committed to a transparent, impartial and objective process that will be managed and overseen by the international community in order to avoid even the slightest perception of bias.” “It is time to hold Russia accountable,” Kyslytsya said, calling the resolution “a signal of hope for justice.” Russia’s U.N. Ambassador Vassily Nebenzia urged assembly members to vote against the resolution, calling it “an attempt to legalize something that from the view of existing international law cannot be legalized.” It is “legally null and void,” he said.

Nebenzia accused the West of “doing everything it can to provide a veneer of legitimacy” to start spending frozen — or actually “stolen Russian assets amounting to billions of dollars.” And he accused the West of seeking a General Assembly decision “as a screen to hide this open robbery” whose “beneficiaries will end up being the Western military corporations.” He warned that approval of the resolution “can only increase tension and instability in the entire world,” and said supporters of the resolution “will become implicated in illegal expropriation of sovereign assets of a third country.”

Sixteen countries and the Palestinians echoed Russia, saying in a joint statement that the resolution didn’t have “sufficient legal basis.” Its signatories, including China, Iran, Angola and Venezuela, said countries suffering from foreign interference, colonialism, slavery, oppression, unilateral sanctions “and other internationally wrongful acts, also deserve the right for remedy, reparation and justice, which should be addressed through sound legal processes.”

Canada’s U.N. Ambassador Robert Rae shot back that the resolution makes no mention of forcibly seizing assets or destroying the powers of sovereign states, and said Russia is only making the allegations because it doesn’t want to admit the resolution’s call for an international register to document evidence of damage, loss and injury. “The assembly is not being asked to perform a function as a judge or jury,” he said. And Russian claims that “this is some systematic, Western plot to steal the assets of sovereign states — It’s just complete balderdash. It’s nonsense, and we have to have the courage to say it.”

Russia’s veto power in the 15-member Security Council has blocked the U.N.’s most powerful body from taking any action since President Vladimir Putin ordered the invasion. But there are no vetoes in the General Assembly, which previously adopted four resolutions criticizing Russia’s invasion. Unlike Security Council resolutions, General Assembly resolutions are not legally binding, but they do reflect world opinion and have demonstrated widespread opposition to Russia’s military action. The resolution adopted Monday was sponsored by Canada, Guatemala, Netherlands and Ukraine and co-sponsored by dozens of others.

It reaffirms the General Assembly’s commitment to Ukraine’s “sovereignty, independence, unity and territorial integrity” and reiterates its demand for Russia to immediately “cease its use of force against Ukraine” and withdraw all its forces from Ukrainian territory. It also expresses “grave concern at the loss of life, civilian displacement, destruction of infrastructure and natural resources, loss of public and private property, and economic calamity caused by the Russian Federation’s aggression against Ukraine.” The resolution recalls that Article 14 of the U.N. Charter authorizes the General Assembly to “recommend measures for the peaceful adjustment of any situation … which it deems likely to impair the general welfare of friendly relations among nations” including violations of the Charter.

Soon after Russia’s invasion, the General Assembly adopted its first resolution on March 2 demanding an immediate Russian cease-fire, withdrawal of all its troops and protection for all civilians by a vote of 141-5 with 35 abstentions. On March 24, the assembly voted 140-5 with 38 abstentions on a resolution blaming Russia for Ukraine’s humanitarian crisis and urging an immediate cease-fire and protection for millions of civilians and the homes, schools and hospitals critical to their survival.

Monday’s vote was close to the lowest vote for a Ukraine resolution: The assembly voted 93-24 with 58 abstentions on April 7 to suspend Russia from the U.N.’s Geneva-based Human Rights Council over allegations Russian soldiers in Ukraine engaged in rights violations that the United States and Ukraine have called war crimes. The assembly voted overwhelmingly by its highest margin — 143-5 with 35 abstentions — on Oct. 12 to condemn Russia’s “attempted illegal annexation” of four Ukrainian regions and demand its immediate reversal.