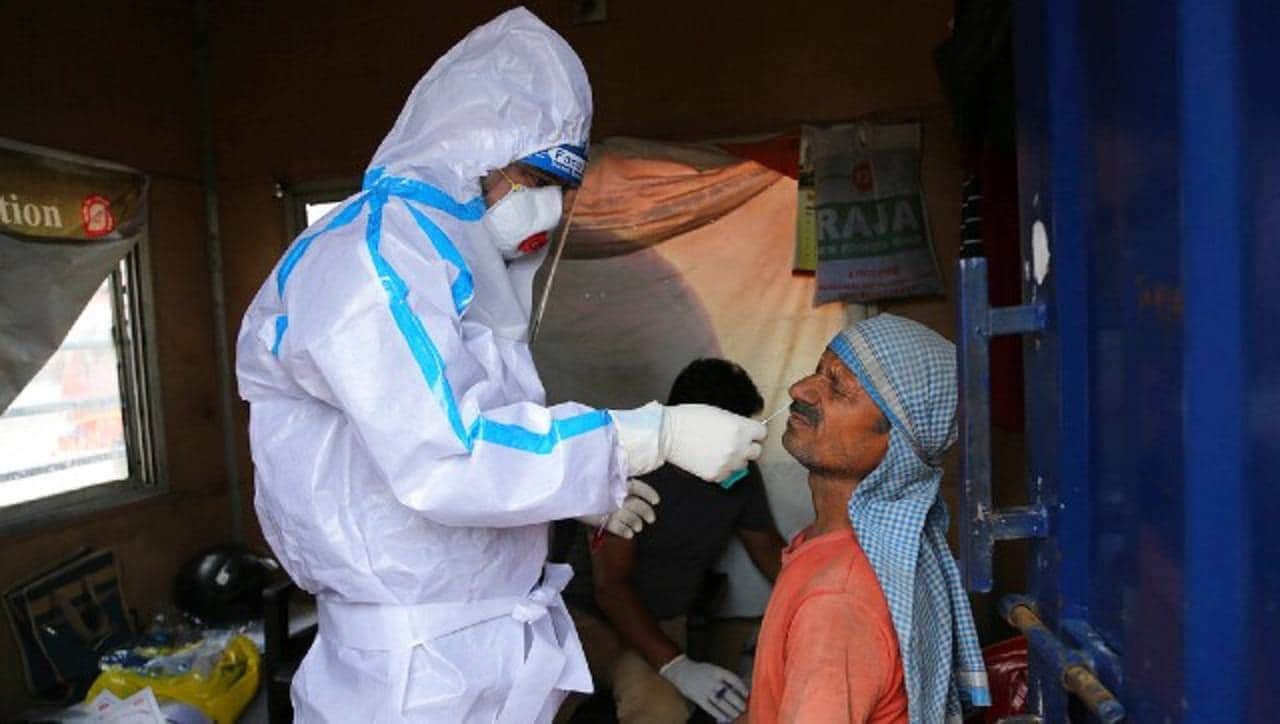 India’s COVID-19 case count surged to over  21 lakh on Sunday with 64,399 new cases while the toll climbed to 43,379 with 861 more fatalities, said the Union health ministry in its morning update.

However, the number of recoveries also went up to 14,80,884 with a record number of 53,879 more people recuperating in the past 24 hours, it said. With this, the recovery rate has climbed to 68.78 percent while the case fatality rate has dropped 2.01 percent, according to the ministry’s data.

India reported more than 60,000 new cases for the third consecutive day.  The country’s case count had crossed the 20 lakh on Friday.

The nationwide total of coronavirus cases mounted to 21,53,010, including 43,379 deaths, said the health ministry in its morning update.

The health ministry stressed that more than 70 percent of the deaths occurred due to comorbidities.

There are 6,28,747 active cases of the coronavirus disease (COVID-19), which comes up to 29.20 percent of the total cases recorded in the country. Recoveries are over twice the number of active cases at present, the ministry said in a statement issued separately.

“The number of recovered cases has touched another high of 2.36 times the active cases. All patients are all under medical attention either in home isolation or in hospitals,” the ministry said.

“India is performing around 500 tests for detection of COVID-19 per minute and the per-day testing capacity has increased over five lakhs,” scientist and ICMR media coordinator Lokesh Sharma said.

Many states and Union Territories in their daily updates reported new cases and fatalities due to the viral infection.

Goa witnessed its highest single-day spike with 506 COVID-19 cases being detected, said state Health Minister Vishwajit Rane. “The increase in the number of cases by 506 on Sunday is the highest spike in a single day in the state. We are discussing the issue with the chief minister, who has already announced that Goa will get a second COVID-19 hospital,” Rane said.

Odisha recorded the highest single-day spike of 13 COVID-19 fatalities, which pushed the toll in the coastal state to 272 on Sunday, a health department official told news agency PTI. At least 1,734 fresh cases were registered in 29 districts of the state, raising the coronavirus case count to 45,927, he said.

Khurda district, where the state capital Bhubaneswar is located, reported the maximum number of new cases at 342, followed by Ganjam at 222, Cuttack at 177, Sundergarh at 126 and Nayagarh at 106.

Gujarat reported 1,078 new coronavirus positive cases, taking the total in the state to 71,064, the health department said. The total number of patients, who succumbed to COVID-19, rose to 2,654 with 25 new fatalities on Sunday, it said.

Neighbouring Maharashtra reported its second-highest single-day spike of 12,248 new COVID-19 cases, taking the total count to 5,15,332, the state health department said. At 12,822, the state had reported the highest one-day rise in cases a day before.

In the south, Tamil Nadu registered 5,994 new patients and 119 deaths while Karnataka saw an increase of 5,985 new cases and 107 deaths. Karnataka health Minister B Sriramulu said he has tested positive for coronavirus and has been hospitalised at the state-owned Bowring hospital in Bengaluru.

“Following fever, I got myself tested and found to be infected by coronavirus,” Sriramulu tweeted in Kannada.

Sriramulu is the fifth minister in Karnataka to have tested positive for coronavirus. Prior to him, Chief Minister B S Yediyurappa, Forest Minister Anand Singh, Tourism Minister CT Ravi and BC Patil were found to have been infected by the virus.

Andhra Pradesh, where a fire at a COVID care centre in Vijaywada claimed at least 10 lives, saw a record jump of 10,820 new fresh infections and 97 deaths. The statewide case count zoomed past 2.27 lakh while the toll mounted to 2,036. Special Chief Secretary (Health) KS Jawahar Reddy said the state was witnessing a ‘peak curve’ as the positivity rate over the past few days had climbed to about 16.24 percent.

“Our infection positivity rate was less than one percent till May (during lockdown), which increased to 2.16 percent in June and 12.33 percent in July (post-lockdown). Now it is about 16.24 percent,” he said.

Telangana reported 1,982 new COVID-19 cases, taking the overall infection count to 79,495, while the toll mounted to 627 with 12 more fatalities. State Municipal Administration Minister KT Rama Rao said the state government was planning to ramp up testing to 40,000 samples per day from the current 23,000.

“We are testing nearly 23,000 samples per day and it will soon go upto 40,000. Tests are being carried out in 1,200 plus centres. Our fatality rate is less than one percent and recovery rate one of the best in the country at 72 percentage. Of course there is more to do,” he noted.

Delhi chief minister Arvind Kejriwal asserted that the COVID-19 situation was under control as the state reported 1,300 new cases and 13 fresh deaths. Even as the active cases in the National Capital increased marginally to 10,729 on Sunday from 10,667 on the previous day, Kejriwal put up a strong front, claiming that the AAP government was ready to handle a crisis if it arose.

Delhi Health Minister Satyendar Jain attributed the rise in cases to “patients from outside getting tested here”. Jain said that hospital admissions have also increased due to the patients coming from outside Delhi.

In June, Delhi Lieutenant Governor Anil Baijal had overruled the AAP government’s decision to reserve hospital beds in city-run and private hospitals only for residents of the National Capital afflicted with the coronavirus infection.

Globally, the dreaded viral infection has affected over 1.96 crore people and claimed over 7.27 lakh lives, shows data compiled the John Hopkins University. According to its coronvirus tracker, COVID-19 cases in the US crossed 50 lakh, the highest from any country so far,  while the toll in the country rose to over 1.62 lakh on Sunday.

According to news agency The Associated Press, health officials, however, believe the actual number is perhaps 10 times higher, given testing limitations and the fact that as many as 40 percent of those who are infected don’t show any symptoms. Many Americans have resisted wearing masks and social distancing.

Medical Voice AI: How does it can help combat physical burn-out

Celine Dion has stiff person syndrome: What is the rare neurological disorder?