Home India INS Vagir commissioned: Why it is one big step forward for the... INS Vagir, the fifth submarine of Project 75 Kalvari class, was commissioned into the Indian Navy at the Naval Dockyard in Mumbai on Monday. Image courtesy: @DefPROMumbai/Twitter

The Indian Navy continues to scale up amid growing threats from China. The latest to be added to its underwater fleet is the fifth Scorpene-class submarine, INS Vagir. Commissioned at the Naval Dockyard in Mumbai, the vessel is expected to boost India’s maritime capabilities in the Indian Ocean Region and beyond.

The Kalvari-class submarine, which was delivered to the Indian Navy on 20 December last year, has been built indigenously at Mumbai’s Mazagon Dock Shipbuilders Limited. Its construction started in July 2009. The diesel electric-attack submarine is designed by the French defence major, Naval Group (formerly DCNS), and Spanish state-owned entity Navantia.

Launched on 12 November 2020, the submarine has had the lowest build time among all made-in-India submarines until now. INS Vagir undertook her maiden sortie in February last year, commencing demanding sea trials. She has gone through comprehensive acceptance checks before being commissioned.

The submarine has “superior stealth features” like an advanced acoustic absorption technique. It can undertake diverse missions including anti-surface warfare, anti-submarine warfare, intelligence gathering, mine laying and surveillance missions. It can reportedly stay underwater for 50 to 60 days. INS Vagir is also Sand Shark and it represents ‘stealth and fearlessness’, according to the Indian Navy. Image courtesy: @DefPROMumbai?Twitter

It’s all about “stealth and fearlessness”

The vessel got its name from the erstwhile Vagir, a Vela-class submarine from Russia that served in the Indian Navy from 1973 to 2001. The original Vagir was commissioned on 1 Nov 1973 and undertook numerous operational missions including deterrent patrols. It was decommissioned on 7 Jan 2001 after serving the nation for about three decades.

The new Vagir is also called “Sand Shark”. It represents “stealth and fearlessness”, two qualities that are synonymous with the ethos of a submariner, says a government release.

INS Vagir can be deployed closer to the shore and mid-ocean, an Indian Navy official told ANI. “It will be ready to meet all the requirements of the Navy and the country. It is a big step towards becoming Atmanirbhar Bharat, ” he added.

“Vagir is a lethal platform with a formidable weapon package. Vagir is the third submarine inducted into Navy in a span of 24 months. It is also a shining testimony to expertise of our shipyards to construct complex and complicated platforms,” said Admiral R Hari Kumar, Chief of Naval Staff.

The main focus of the Indian Navy is the Kalvari Class submarines. Under Project 75, six submarines are being built.

Other submarines of the Kalvari class are INS Kalvari, INS Khanderi, INS Karanj, and INS Vela which have been commissioned into the Navy. INS Vagsheer was launched in April 2022 and is under construction. It is expected to be inducted in early 2024. All of these are attack submarines, also known as the “hunter-killer” type – they are designed to target and sink enemy vessels.

The Kalvari-class submarines are 220 feet long with a height of 40 feet. They can reach the highest speed of 11 knots when surfaced and 20 knots when submerged, according to a report in The Indian Express. These modern Scorpene class of submarines have Air Independent Propulsion (AIP) which enables non-nuclear submarines to operate for a long time without access to surface oxygen. They can launch various torpedoes and missiles and come with a range of surveillance and intelligence-gathering mechanism, the report says.

The submarines in the Kalvari class get their names from now-decommissioned classes of submarines. The older Kalvari class included Kalvari, Khanderi and Karanj, and Vela class included Vela, Vagir, and Vagsheer. These vessels, which belonged to the Soviet-origin Foxtrot class, were among the first to serve India post-Independence.

Like Kalvari, which means Tiger Shark, Vagir is named after a Sand Fish. Vagsheer gets its name from a deadly deep-sea predator sandfish of the Indian Ocean and Vela from a stingray species. Khanderi has been named after an island fort built by Chhatrapati Shivaji, which played a key role in his navy, and Karanj after an island located south of Mumbai.

The need for submarines and the threat from China

India has lesser submarines than what is needed. It operates one submarine in the nuclear-powered classes, Chakra and Arihant, and 14 from the diesel-electric category, from three classes, Kalvari, Shishumar and Sindhughosh. 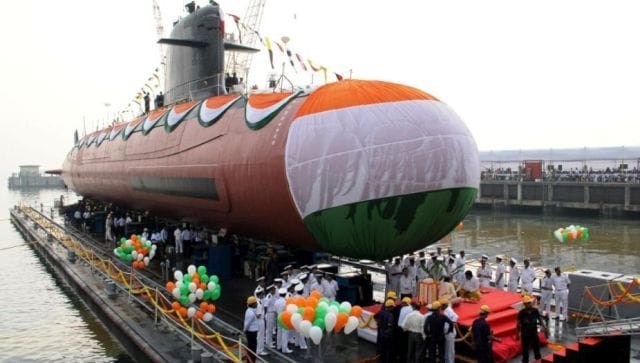 INS Kalvari was commissioned in 2017. The Kalvari-class submarines are used for anti-warship and anti-submarine operations, intelligence gathering and surveillance and naval mine laying.

Project 75, which includes the construction of six Scorpene-class-developed submarines, aims to boost the Navy’s strength. It has been marred by delays. The first submarine was scheduled to be delivered by 2012 but the project was delayed. The first Scorpene class submarine INS Kalvari joined the fleet in 2017.

The focus on modernising the submarine arm is vital as China attempts to expand its naval presence in the Indian Ocean.

“Indian analysts are particularly worried that Chinese undersea drones, seen recently in Indonesia’s near-seas, could be deployed in the waters around India’s Andaman and Nicobar Islands in the Eastern Indian Ocean. Consequently, India’s naval leadership is focusing on diesel-electric submarines that have the capability to patrol the littoral,” a report published by Observer Research Foundation says.

China has the biggest maritime force in the world with around 340 warships, according to the Pentagon’s 2022 China Military Power Report, released in November 2022. Its fleet is expected to grow to 400 ships in the next two years, the report says.