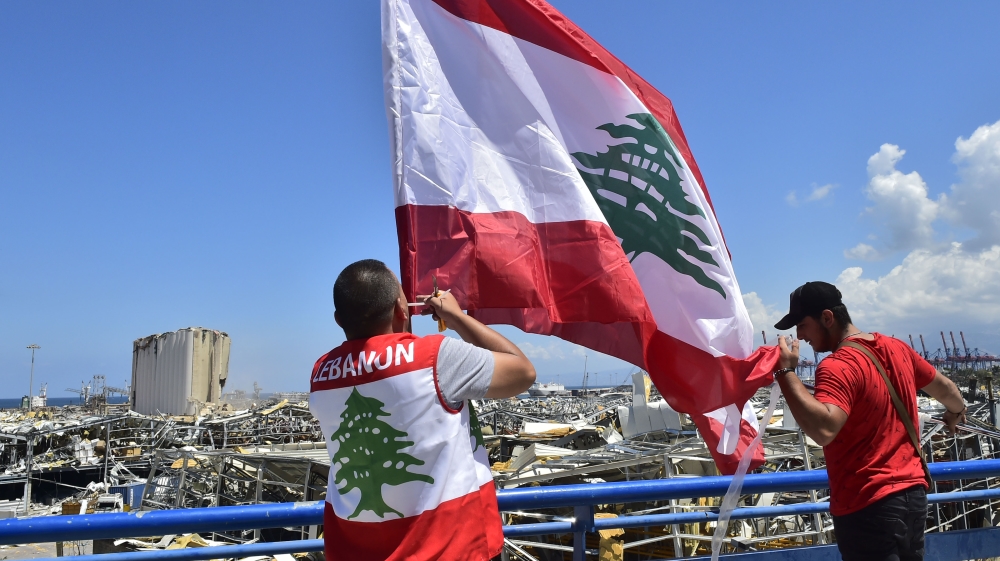 Iran wants the United States to lift sanctions against Lebanon and wants other countries to refrain from politicising last week’s Beirut explosion that killed at least 158 people and left more than 6,000 wounded.

Iran’s comments on Monday come a day after international leaders pledged $300m in humanitarian assistance to Lebanon following the devastating explosion that also left more than 300,000 people homeless in the capital city.

“The blast should not be used as an excuse for political aims … the cause of the blast should be investigated carefully,” Iran’s Foreign Ministry spokesman Abbas Mousavi told a televised news conference on Monday.

“If America is honest about its assistance offer to Lebanon, they should lift sanctions.”

The international aid announced on Sunday would be “directly delivered to the Lebanese population” and offered support for an “impartial, credible and independent inquiry”.

“Lebanese authorities must now implement political and economic reforms demanded by the Lebanese people and which alone will enable the international community to act effectively alongside Lebanon for reconstruction,” said French President Emmanuel Macron, who chaired the virtual donor conference.

Macron visited Beirut’s shattered streets on Thursday, two days after the chemical explosion in the dock area. Asked about the visit, Mousavi said: “Some countries have been trying to politicise this blast for their own interests.”

The explosion, whose mushroom cloud reminded many of an atomic bomb, left a 43-metre-deep (141-foot) crater at Beirut’s port, said a security official, citing French experts working in the disaster area.

It was triggered by 2,750 tonnes of ammonium nitrate, which had been stored at a port warehouse since 2013.

Protesters have taken to the streets of Beirut to vent their fury at their government, which they accuse of negligence following evidence that authorities knew about the ammonium nitrate and did nothing for six years.

Police and the army responded with tear gas and rubber bullets, resulting in hundreds of protesters being wounded. At least one policeman has been killed, security forces said.

“Those who died paid the price of a state that doesn’t care about anything except power and money,” said protester Tamara, 23, whose friend Rawan, 20, was killed in the blast.

“It’s not enough that ministers resign,” said her friend Michel. “Those who put the explosives there must be held accountable. We want an international tribunal to tell us who killed [Rawan].”

Al Jazeera’s Zeina Khodr, reporting from Beirut, said people are “disillusioned” because they are up against a “militarised state”.

“Protesters are not under any illusion that changing or getting rid of the political and security establishment that has been in place for decades is going to be easy,” she said, speaking from the capital Beirut.

The protesters demand the wholesale removal of Lebanon’s ruling class, which they see living in luxury while millions endure job losses, deepening poverty, power blackouts and mountains of rubbish piling up in the streets.

Two ministers, Information Minister Manal Abdel Samad and Environment Minister Damianos Kattar, resigned from their posts over the weekend, leading embattled Prime Minister Hassan Diab to propose early elections in order to break the impasse that is plunging Lebanon ever deeper into political and economic crisis.

Nine other members of parliament have also stepped down, but according to Khodr, those in power are adamant about keeping the government in place.

“There were reports that other ministers wanted to tender their resignation, but after intense negotiations behind closed doors, a minister belonging to the Hezbollah camp emerged and said: ‘We are not resigning, the government is still standing, and we will continue to carry out our duties and responsibilities towards our people’,” she said.