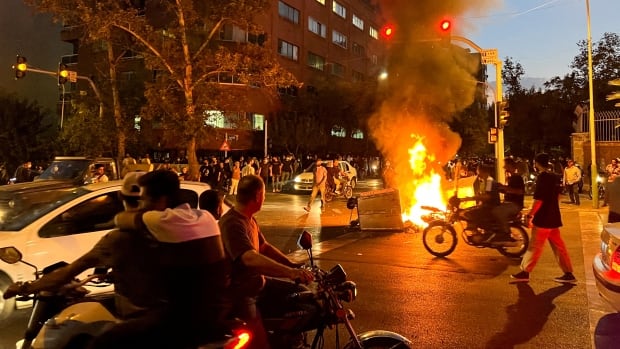 Iranian security forces opened fire Friday on demonstrators in a southeastern city that has seen weeks of unrest amid nationwide protests, activists said. They said the shooting in Zahedan killed at least two people, threatening to ignite further tensions.

Located in Iran’s long-restive Sistan and Baluchestan province, Zahedan has seen the deadliest violence so far in the weeks of protests that have gripped Iran. The demonstrations in the city erupted in part over a rape allegation against a senior police officer there, dovetailing with protests over the September death of 22-year-old Mahsa Amini that have inflamed most of the country.

Activists estimate that in Zahedan alone, nearly 100 people have been killed since a Sept. 30 rally there set off a violent police response. On Friday, soldiers surrounded a key Sunni mosque in the area where residents rallied against the Iranian government, while also shooting at demonstrators, activists said.

The protests across Iran have become the greatest threat to the country’s theocratic government since the 2009 Green Movement demonstrations, evolving from focusing on women’s rights and the state-mandated headscarf, or hijab, to calls to oust Shiite clerics who have ruled Iran since the 1979 Islamic Revolution.

Weeks into the protests, women continue to remove their hijabs during the street demonstrations as international pressure grows on Iran’s government over its crackdown on protesters.

The demonstrations have involved more than 125 cities; at least 270 people have been killed and nearly 14,000 have been arrested, according to the group Human Rights Activists in Iran.

Protests to come up at UN next week

The United States will next week put the United Nations spotlight on the Iranian protests sparked by Amini’s death in police custody and look for ways to promote credible, independent investigations into Iranian human rights abuses.

The U.S. and Albania will hold an informal UN Security Council gathering on Wednesday, according to a note outlining the event, seen by Reuters. Iranian Nobel Peace Prize laureate Shirin Ebadi and Iranian-born actress and activist Nazanin Boniadi are set to speak.

“The meeting will highlight the ongoing repression of women and girls and members of religious and ethnic minority groups in Iran,” the note said. “It will identify opportunities to promote credible, independent investigations into the Iranian government’s human rights violations and abuses.”

Independent UN investigator on human rights in Iran, Javaid Rehman, is also due to address the meeting, which can be attended by other UN member states and rights groups.

‘Death to the Basiji’

Iran’s Sistan and Baluchestan province, bordering Afghanistan and Pakistan on the Gulf of Oman, is a majority Sunni region. Its Baluch people long have complained about being treated as second-class citizens by Iran’s Shiite theocracy.

On Friday, videos from the advocacy group HalVash showed demonstrators in the streets of Zahedan, the province’s most-populous city and its capital.

Some chanted “Death to the Basiji,” a reference to the volunteer forces of Iran’s paramilitary Revolutionary Guard, which is answerable only to Supreme Leader Ayatollah Ali Khamenei.

The footage then shows protesters falling back to the city’s Makki Grand Mosque, where they had initially gathered for Friday prayers. Security forces followed. Later, streaks of blood on tilework and bloody palm prints in the mosque’s courtyard could be seen, with activists saying they feared two people had been killed.

“Police officers, please open the way for worshippers,” a voice over the mosque’s loudspeakers pleaded at one point. “Don’t cause [trouble] so that people can return to their homes.”

Iranian authorities did not immediately acknowledge Friday’s violence in Zahedan, located about 500 kilometres southeast of the country’s capital, Tehran. Later, state television in an online report said one person had been killed and 14 others wounded in Zahedan. It did not say who was behind the shooting.

Marking 40 days since the 22-year-old Mahsa Amini’s death in police custody, thousands of people in cars, on bikes and on foot made their way towards her burial site.

In its strongest statement yet, the United Nations on Friday condemned “all incidents that have resulted in death or serious injury to protesters” in Iran and reiterated “that security forces must avoid all unnecessary or disproportionate use of force against peaceful protesters.”

“Those responsible must be held to account,” UN spokesman Stephane Dujarric said, adding that the UN was urging Tehran “to address the legitimate grievances of the population, including with respect to women’s rights.”

The state-run IRNA news agency carried a statement by the province’s security council earlier Friday, saying that the police chief in Zahedan and another police official had been fired over their handling of the Sept. 30 protest. The statement for the first time acknowledged that police shot and killed people praying at the time at a nearby mosque.

The security council’s version of the demonstration alleged that 150 people, including armed men, attacked a police station and attempted to take it over during the protests.

The “armed conflict, and police shooting, unfortunately, led to the wounding and killing of a number of worshippers and innocent passersby who had no role in the unrest,” it said.

However, the statement claimed that only 35 people were killed, while activists estimate about three times that number were killed by security forces, who also allegedly fired on protesters from helicopters.

New protests took place in other cities as well, including in western Baneh, on Thursday night. Activists warned others had been killed by security forces. However, Iran’s government has not provided an overall death toll from the protests in weeks.

Gathering information about the demonstrations remains difficult. Internet access has been disrupted for weeks by the Iranian government. Meanwhile, authorities have detained at least 46 journalists, according to the Committee to Protect Journalists.

Iranian officials, including Khamenei, have repeatedly alleged the country’s foreign enemies are behind the ongoing demonstrations, rather than Iranians angered by Amini’s death and the country’s other woes.

Iranians have seen their life savings evaporate; the country’s currency, the rial, plummeted and Tehran’s nuclear deal with world powers has been reduced to tatters.