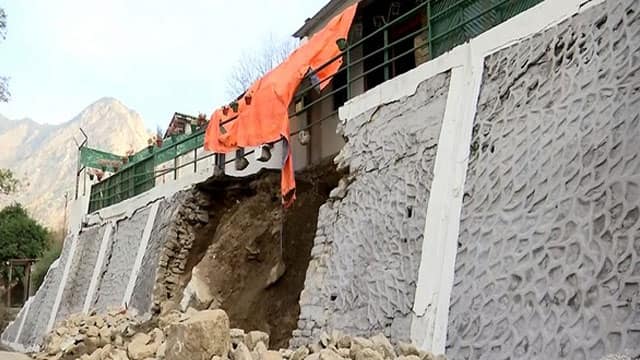 New Delhi/Dehradun: While relief and rescue efforts have been intensified in Joshimath after it was declared a “landslide and subsidence-hit zone”, the district administration on Monday said that the inspection of basic facilities at relief camps set up for the affected people is being conducted. “Basic facilities in the relief camps arranged for the affected people in Joshimath are being constantly inspected by the administration and all possible help is being extended to the affected people,” District Magistrate Himanshu Khurana said.

Khurana said immediate inspection will be conducted by the administration if a need arises.

In the Joshimath city area, 229 rooms have been temporarily identified as habitable, with the capacity estimated at 1271. The administration has also ordered an immediate evacuation of residents from areas prone to excessive landslides and deemed unsafe, after considering the risk to life and property, under sections 33 and 34 of the Disaster Management Act.

The district administration on Sunday distributed necessary assistance funds for essential household items to the affected families. While the cause of the apparent subsidence in the holy town is unclear, an Emeritus scientist at the Indian National Science Academy (INSA), DM Banerjee, blamed the prevailing situation on the construction of roads and tunnels for a nearby hydroelectric project.

“Joshimath is a part of the lesser Himalayas, the rocks are from the Precambrian era and the territory is of seismic zone 4. Apart from this, people should not have made houses on this land, especially not big ones with 3-4 storeys,” Banerjee told ANI on Sunday.

The Centre on Sunday stressed that the immediate priority is the safety of people and asked experts to prepare short and long-term plans for conservation and rehabilitation. Amid a mounting sense of urgency, senior Uttarakhand government officials including Chief Secretary Sukhbir Singh Sandhu, DGP Ashok Kumar and Secretary to the Chief Minister R Meenakshi Sundaram visited the worst-hit Manohar Bagh, Singdhar and Marwari areas and appealed to people to shift to temporary relief centres.

Officials said 13 more families living in houses with huge cracks were moved by the administration to safe locations on Sunday. The number of families evacuated to temporary relief centres now stands at 68, the Chamoli district disaster management office said.

Prime Minister Narendra Modi called Chief Minister Pushkar Singh Dhami and reviewed the situation, including the steps taken so far for the safety and rehabilitation of residents, and assured him of necessary assistance. The Uttarakhand chief secretary has said that state and district officials with the support of central experts have assessed the situation on the ground and affected families are being shifted to safe locations.

One team of the National Disaster Response Force and four teams of the State Disaster Response Force have already reached Joshimath. P K Mishra, the prime minister’s principal secretary who held the meeting, stressed that the immediate priority should be the safety of people living in the affected area and said the state government should establish a clear and continuous communication channel with the residents.

Experts from a range of central institutions- NDMA, NIDM, Geological Survey of India, IIT Roorkee, Wadia Institute of Himalayan Geology, National Institute of Hydrology and Central Building Research Institute should work closely with Uttarakhand in the spirit of “Whole of Government” approach.

CM Dhami had visited Joshimath on Saturday to assess the situation on the ground, a day after he directed the immediate evacuation of around 600 affected families.

The National Remote Sensing Centre, Hyderabad and the Indian Institute of Remote Sensing, Dehradun have been asked to conduct a study of the Joshimath area through satellite imagery and submit a detailed report with photographs. A petition has been filed in the Delhi High Court seeking a direction to the Centre to constitute a committee headed by a retired judge to look into the issue of the sinking of Joshimath and rehabilitate the affected families.

Earlier, a seer had moved the Supreme Court seeking that the Joshimath crisis be declared a national disaster. Experts have claimed that the land subsidence in Joshimath is primarily due to the National Thermal Power Corporation’s Tapovan Vishnugad Hydro Power Project and is a very grave reminder that people are messing up with the environment to an extent that is irreversible.