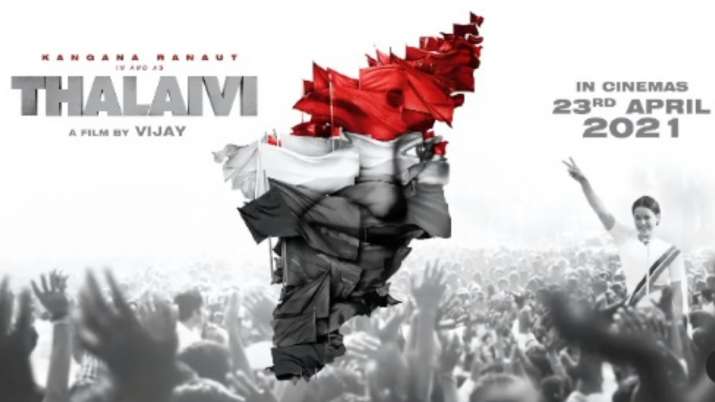 Actress Kangana Ranaut‘s much-awaited film Thalaivi is all set to release in theatres on April 23. The makers made the announcement on Wednesday, on the occasion of the 73rd birth anniversary of actress-turned-politician J Jayalalithaa, whose life is depicted in the film. Tweeting the news, Kangana Ranaut wrote: “To Jaya Amma, on her birth anniversary. Witness the story of the legend, #Thalaivi, in cinemas on 23rd April, 2021.”

The trilingual film will release in Hindi, Tamil and Telugu. The film is directed by AL Vijay, and it also features Arvind Swami, Prakash Raj, Madhoo and Bhagyashree in key roles.

The film will showcase the life of late former chief minister of Tamil Nadu, from her rise in the world of films as an actress to becoming a powerful politician.

Kangana had earlier in the day, teased fans about the big announcement by posting on Twitter: “On #Thalaivi’s 73rd birth anniversary, stay tuned as we make an important announcement at 6:35 PM today!”

For Thalaivi, Kangana Ranaut had gained 20 Kgs and learned Bharatnatyam to step into the shoes of the great actress and leader.The actress shared that gaining weight for the role and doing Bharatnatyam left her back severely damaged, adding that she is struggling to lose the extra kilos. “I played the first super humangirl on Indian screen, thanks to my body a rare combination of dainty yet strong looking, in my 30’s I had to gain 20 kgs for ‘Thalaivi’ and do Bharatnatyam, it left my back severely damaged but no bigger gratification than to play a role to perfection,” Kangana tweeted along with a series of photographs showing her transformation.

“Journey back to my fit body wasn’t easy, I feel good but even in seven months not able to achieve my earlier stamina and agility back and those last 5 kgs arnt budging, there are moments of despair and then my director Vijay sir shows me ‘Thalaivi’ footage and all seems fine,” she added.