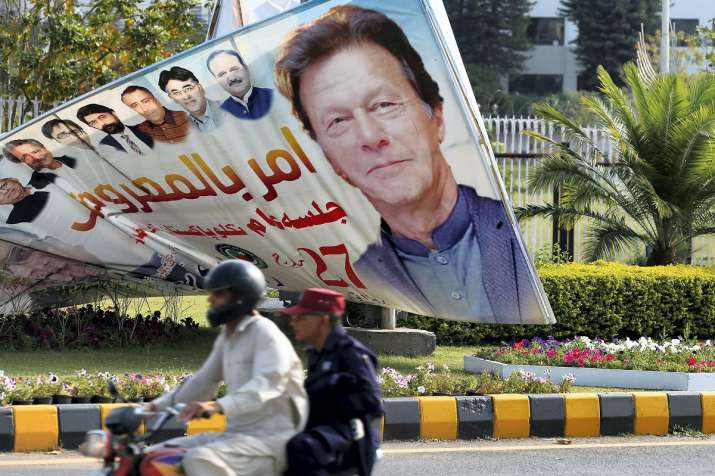 Key members of the Pakistan Tehreek-e-Insaf (PTI) were arrested, while the entire Islamabad was sealed under the direction of the Shehbaz Sharif government on Wednesday. The development comes ahead of former Prime Minister Imran Khan’s Azadi March scheduled for today.

The houses of PTI leaders and workers were raided by the Pakistan police.

PTI leader, Mian Mehmood-ur- Rasheed was arrested after the police made a late-night raid under section 16 of the Maintenance of the Public Order (MPO), reported Geo News.

The government rounded up over 1,000 PTI leaders and workers in a crackdown designed to derail the party’s plans for a massive power show in Islamabad.

Section 144 was imposed in Lahore, the twin cities of Rawalpindi and Islamabad and Karachi, as well as other major cities in the country, while the Punjab government sought the deployment of Rangers to control the law and order situation.

The federal capital has been sealed from the rest of the country as all entry and exit points leading towards Islamabad were closed down with the heavy deployment of police and containers.

Officers in the capital have stated that the government has agreed on two plans, either allowing the PTI marchers to enter Islamabad or intercepting them at entry points, reported Dawn newspaper.

The Pakistan officers had planned to take Imran Khan into custody last Friday. A well-equipped contingent of the capital police also reached Banigala to make his arrest. However, Imran Khan was in Multan in lieu of the public rally, which rendered the mission unsuccessful.

According to the first plan, although the PTI marchers would be permitted to enter Islamabad, they would be forbidden to cross Zero-Point.

On the hand, the next plan will be implemented if the government decides to forbid the entry of the PTI leaders. In that case, all the entry points will be sealed and the marchers would be intercepted on Attock and Jhelum bridges.

Meanwhile, 500 containers were given to the Pakistan police and 300 are deployed to seal the Red Zone.

Further, the government has also decided to cancel leaves for the Capital police, except for emergencies, reported Dawn newspaper as cited by the officers.

Khan announced that his party’s long protest march to Islamabad will begin on May 25, demanding the dissolution of the National Assembly and a date for the next general election. Khan invited people to join in large numbers.

The former prime minister said the main demands for the march to the capital were the immediate dissolution of the National Assembly and a date for the next general election.

Imran Khan also told the military to stick to its stated stance of being “neutral”.

“The foreign conspiracy against Pakistan was hatched eight months ago and I was alerted about it in June, and after August, I fully understood what was happening. We did our best that somehow this conspiracy could be voided but unfortunately, we couldn’t stop it,” Khan said.

The PTI chairman explained in detail his allegations of conspiracy as well as the purpose of his march before announcing the date.

Khan emphasised that the party had always remained peaceful in its protests, and the same will be true for the upcoming march and warned that the party would take legal action against any wrong action taken against the peaceful protest march.

Pakistan signs deal with France to suspend loans worth $170 million