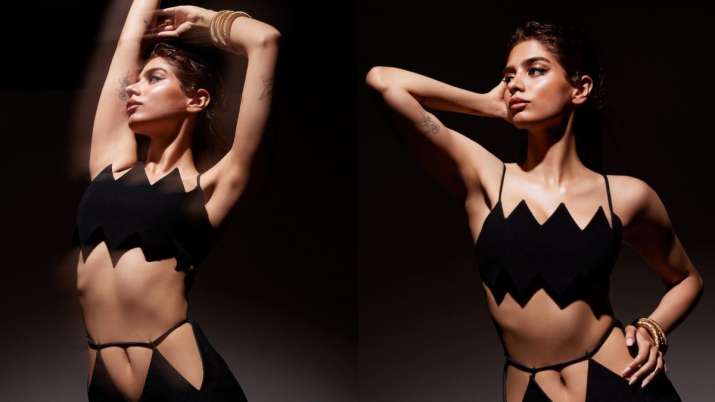 Khushi Kapoor, younger daughter of late actress Sridevi and producer Boney Kapoor is a true diva. The starkid is all set to make her Bollywood debut with Zoya Akhtar’s film The Archies. Even before the release of her first film, Khushi has garnered a massive fanbase on social media platforms. She regularly shares pictures and videos on her Instagram handle and keeps her fans updated. On Friday, She shared a series of pictures which left the internet in meltdown. Khushi looked breathtakingly beautiful in those pictures. Take a look at the set of stunning pictures below:

Khushi redefined beauty in those pics. She was seen wearing a black cut-out satin dress. Khushi looked every inch gorgeous as she complete the look with bold make-up and nude lips. She was seen flaunting her tattoos too.

In no time, Khushi’s post was bombarded with epic reactions from her fans, friends, and colleagues. Her sister and actress Janhvi  reacted and shared the post on her official Instagram handle and captioned it, “Is she real?” Khushi’s The Archies co-star Suhana Khan also wrote, “Amazing”. Karisma Kapoor, Antara Marwah, Maheep Kapoor, Aaliyah Kashyap and several other celebrities also reacted on Khushi’s post.

This is not the first time, Khushi was seen in an ultra glamourous avatar. She often treats her fans and followers with some gorgeous pictures. Check them out below:

Following the footsteps of her mother and sister, Khushi Kapoor will be making her debut with Zoya Akhtar directorial ‘The Archies’, which has been adapted from the famous comic series of the same name. Apart from Khushi, the film will feature the children of some of B-town’s most widely known faces.

Also read: Amitabh Bachchan-Nitin Gadkari pose for picture BUT netizens spot something bizarre. Can you see it?

While it will star Shah Rukh Khan‘s daughter Suhana Khan in her debut role, the cast also includes Agastya Nanda, who’s the grandson of Amitabh Bachchan and Jaya Bachchan. In addition, the film will also star Mihir Ahuja, Dot, Yuvraj Menda, and Vedang Raina in key roles. The young actors will play the beloved characters from the hugely popular Archie Comics. Set in the 1960s, ‘The Archies’ is a musical drama that will premiere on Netflix.