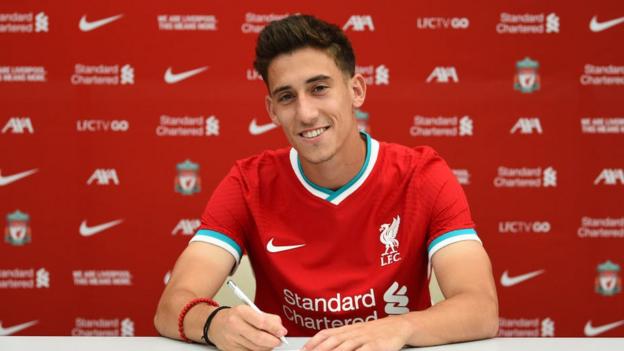 Kostas Tsimikas says he believes he has joined “the biggest club in the world” after completing a move to Liverpool from Olympiakos.

The 24-year-old has joined the Premier League champions for about £11.7m on a five-year contract and is expected to provide competition for Andy Robertson.

“It’s an honour to be here and I will give my best. For me, [it’s] the biggest club in the world.”

Tsimikas, who says his brother made him support Liverpool as a child, becomes the club’s first signing of the summer.

The Reds had moved for Norwich defender Jamal Lewis but chose not to meet the Championship club’s valuation of the left-back.

Tsimikas, who has three caps for Greece, made his debut for Olympiakos in 2015 and went on to make 86 appearances in all competitions.

He played 27 times in the league last season, securing his first major silverware as Olympiakos won the Greek title.

Liverpool manager Jurgen Klopp said: “We have watched Kostas for a long time and are really happy that he has joined us. It’s the perfect news before we come back together very soon.

“He is a very good footballer with an attitude to win and to compete, and I really like his mentality. It fits perfectly with the mood and the desire we have in our dressing room already.

“Kostas knows from personal experience what is required to challenge and succeed domestically and in the Champions League, and he is ambitious for more – just like us.”

Liverpool switched their focus to Tsimikas after having a £10m offer, with a substantial sell-on clause, for Jamal Lewis rejected by Norwich.

However, the Reds had held a long-term interest in Tsimikas.

They started doing character checks on the Greece defender towards the end of 2018 and watched him on a regular basis during the 2018-19 season.

Nice and Napoli are understood to have then been close to signing him, but Liverpool sporting director Michael Edwards moved Tsimikas high on his list of left-back options at the start of this year after talks with the Reds coaching department.

Reds boss Jurgen Klopp was also impressed by the 24-year-old, who played for Olympiakos in the Champions League group stages earlier this season and against Arsenal and Wolves in the Europa League.