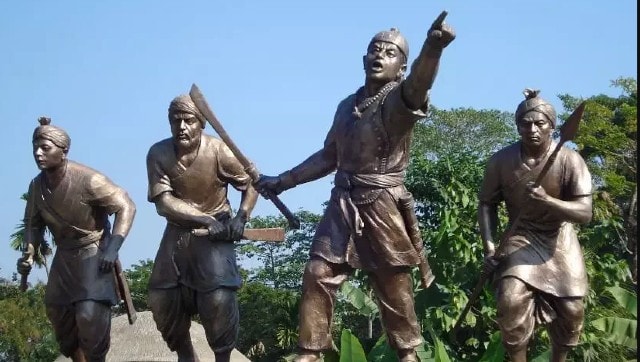 As a schoolboy whenever I crossed the Saraighat bridge on the river Guwahati en route to Assam’s biggest city from the northern part of the state, thoughts of the famous Battle of Saraighat in 1671 in which Ahom general Lachit Barphukan defeated the mighty army of Mughal emperor Aurangzeb would often criss-cross my mind. A certain sense of belongingness would emerge remembering a legend of the soil who fought a heroic battle defeating an army far more equipped and bigger than his.

I could still recall the thrill when I managed to grab an Amar Chitra Katha comic on Lachit Barphukan during my school days. Another occasion to swell in pride as an Assamese was when the National Defence Academy in Pune instituted the Lachit Barphukan gold medal for the best cadet in 1999 to inspire defence personnel to emulate Lachit Barphukan’s heroism and sacrifices. Other than that reference to the great Ahom general in national parlance is effectively few and rare.

With the Assam government planning for a flagship event to celebrate the 400th birth anniversary of Lachit Barphukan in a big way at the Vigyan Bhawan in New Delhi from 23-24 November and Prime Minister Narendra Modi scheduled to attend the function apart from Union Home Minister Amit Shah, the curiosity about Lachit Barphukan should rise at the national level. From rakes of Delhi Metro displaying posters on Lachit Barphukan to the Assam government launching a Lachit Barphukan app, there has been a concerted effort to create awareness on the valour of the great Ahom general. Similarly, the Rashtriya Swayamsevak Sangh is also planning events in many parts of the country including Guwahati to commemorate the great Ahom war hero.

“About being late I can say that any event that is organised in tune with an occasion garners more attention and publicity and takes it to the minds of the people. Having said that, I can tell you that each and every cadre of the Sangh takes the name of the brave Assamese general Lachit Barphukan in their Pratah Smaran across all shakhas. During Pratah Smaran, the RSS cadres remember and take pride in the history of India. They pay obeisance to their motherland, nature, the brave men and also the Panchakanya — Ahalya, Draupadi, Kunti, Tara and Mandodari. Among the great souls of Assam whose names are taken are Srimanta Sankardev, Lachit Barphukan, the last king of the Varman dynasty in erstwhile Kamarupa (now Assam) Bhaskaravarman and others,” said Assam state organising secretary of Shishu Shiksha Samiti, Vidya Bharati and executive member, Akhil Bharatiya Itihas Sankalan Yojana, Hemanta Dhing Mazumdar. Mazumdar is also the Zonal Organising Secretary, North-East Bharat, Akhil Bharatiya Itihas Sankalan Yojana.

The Vidya Bharati is the educational wing of the RSS while Akhil Bharatiya Itihas Sankalan Yojana is a subsidiary of the RSS dedicated to restoring history in its correct form.

What keeps the RSS cadres informed is that each year the organisation imparts training to its cadres to familiarise them with the brave men of India. Lessons on Lachit Barphukan are also given during these training sessions.

“Suppose in Assam if we impart lessons on Maharana Pratap, Chhatrapati Shivaji or Guru Govind Singh, in some other state of the country similarly they might pick Lachit Barphukan or Rajarshi Bhagya Chandra from Manipur as their theme during these annual training. However, we must also realise that since India is a ‘Veerbhumi’ (land of the brave) and we have many brave souls, it is difficult to celebrate each one of them every year in a big way. But let me add, they are remembered in their respective places every year and only on occasions such as the 400th Jayanti of Lachit Barphukan, it is done in a big way,” said Mazumdar.

With the RSS preparing to celebrate the 400th birth anniversary of Lachit Barphukan in Guwahati in a big way and also in all districts of Uttar Pradesh and in Kolkata, it is clear that much awareness and curiosity about the Ahom general will be generated at the national stage.

Will RSS benefit in Assam after this event?

Although the Lachit Barphukan event is aimed to create a deep nationalistic fervour, it might see a growth in the cadre strength in the state as a bonus if people outside the organisation are impressed by what they see in the 400th birth anniversary celebrations of the Ahom general of the 17th century. The RSS already has a firm footing in Assam with the Hindutva ideology now increasingly getting firmly rooted in the state.

“There is a possibility that our cadre strength might grow due to this event. Most importantly, people who are not within the ambit of the RSS will now hear about the brave deeds of Lachit Barphukan. The Assam chapter of Akhil Bharatiya Itihas Sankalan Yojana is also working on creating awareness of the brave men and women of our region among the people. In fact, Lachit Barphukan was a general from the Ahom community and we already have many members from the community as swayamsevaks. Notably, the members of the community who are not part of the RSS formally are also aware of the nature of the job we do,” said Mazumdar.

“A brave soul may be born in Assam, West Bengal or Kerala but foremost is that they were born in India and it is our responsibility to know about them and follow their footsteps. All who have fought against invaders from abroad are Indian bravehearts. These brave souls are not limited to one province or state or district or community but they belong to all of India. For instance, Lachit Barphukan is not an individual but an institution. In RSS, more than the person himself, we pray, respect and celebrate his qualities, for which he became immortal and has an everlasting influence on us,” he said.

Larger message to the people

The celebration of the 400th birth ceremony by the RSS has some deep objectives and not just as merely a calendar occasion. It seeks to awaken the people on Rashtravad, educate them about the importance of imbibing nationalism for the greater good of the country.

“The larger message would be that for a country to go forward the self-esteem and self-confidence of its citizens are extremely important. People should realise the glories of great individuals, our culture and civilisation and take pride in them. They should know and respect the heroes of the past on whose shoulders our present rest. Lachit Barphukan is significant not only for Ahoms and Assam alone but also for the entire North East India. Till now the narrative is that our people were not brave enough and subjugated themselves to the Mughal regime for 600 long years in India. But the truth is that the Mughals faced tough resistance in different parts of the country including Assam. It is high time to teach our children about our illustrious history,” said Dr Raktim Patar, an assistant professor of History at Gargaon College in Assam and also a member of the Akhil Bharatiya Itihas Sankalan Yojana, Assam chapter.

The broader goal is to motivate the young generation to follow Lachit Barphukan’s path so that they are responsible for their community, state and the country as a whole. Be it the Akhil Bharatiya Itihas Sankalan Yojana or the RSS, the aim is to make the younger generations aware of the brave accomplishments of these great souls.

“We need to understand why Lachit Barphukan defeated the Mughals. It was for us, to secure the future of our region or the country. We need to examine his achievements in the present-day context as our demography is changing, and our religion and culture is on the wane. Just wearing a dhoti or a gamocha around our neck does not make us Assamese. For that we need to celebrate our Bihus and have a sense of belonging. We need to understand that till the time we are in the majority such celebrations will happen. The way forceful religious conversions are happening in Assam if we do not introspect seriously now it will be too late to save our community and culture,” said Mazumdar.

The demographic changes in Assam are rapid and alarming and with these events, the RSS hopes to create some kind of awareness about the seriousness of the situation and the immediate need of concrete steps to protect the state from slipping into demographic mayhem. Had Lachit Barphukan been present today, what would have he done? What do Lachit Barphukan’s principles tell us to do in the present circumstances? The RSS is trying to find answers to these questions.

“Although not in the news much, we are already overlooking the seriousness of ‘love jihad’ where many Hindu women in Assam are either forced or tricked into conversion. It is the biggest social malaise in Assam today but many tend to ignore or hide it under the definition of love. If this continues as it is, generation after generation will be destroyed but people won’t even know,” said Mazumdar.

The fact of the matter is 11 districts in Assam have already become Muslim majority within a very short span of time.

“It is time to wake up our people. If we don’t wake up when there is time our condition will be like the Hindus in Bangladesh. The event is not just to celebrate Lachit Barphukan. We need to imbibe his teachings,” he said.

In our past lies our awakening

The answer to the rising problems of today that face our nation perhaps lies in an immortal song by the bard of Assam Bhupen Hazarika who often sang the glory of Lachit Barphukan.

It is our history that shines our future, it is in the blazing swords of our heroes on the battlefields from the pages of history that enlighten our path to restore our faith in our culture, civilisation and nation.

This is Part 1 of a two-part series.