Home Health Lalu Prasad Yadav’s daughter to donate kidney to him: What is a... 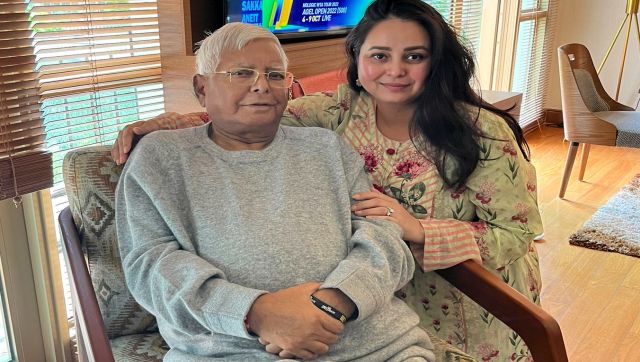 Lalu Yadav’s younger daughter Rohini Acharya, who is based in Singapore, has ‘stepped in to give her father a new lease of life’. Image Courtesy: @RohiniAcharya2/Twitter

Ailing Rashtriya Janata Dal (RJD) patriarch Lalu Prasad Yadav, who’s been in and out of hospital in recent times, is all set to receive a kidney later this month from his second daughter, Rohini Acharya.

Rohini, who is based in Singapore, has “stepped in to give her father a new lease of life”, a family member was quoted as telling news agency PTI. She later confirmed the same to NDTV, saying, “Yes, that’s true. I am destiny’s child and so proud to give my kidney to papa.”

The RJD president, who is out on bail in five fodder scam cases, had been granted permission by the court to travel abroad for a kidney transplant and his passport was released from court custody to get renewed for this purpose.

As per a PTI report, Lalu is likely to visit Singapore again — he was there last month for treatment — between 20 and 24 November during which it is likely that he will undergo the surgery.

Rohini’s decision to donate her kidney to her father has put the spotlight on organ donation and the risks involved for the donor.

Here’s what we know about living kidney donors and what they can expect after the procedure.

A living-donor kidney transplant is when a kidney from a living person is removed and placed into a recipient whose kidneys no longer functions properly.

Anyone above the age of 18 who is in good physical and mental health can be a living donor.

Living organ donations can be categorised as direct donations or non-direct anonymous donations. The first type of organ donors (direct donations) are family members or person known to the recipient. This can include parents, children, brothers and sisters, grandparents or even a spouse, friend, co-worker.

Also read: With Lalu Prasad Yadav’s daughter donating her kidney, here are some Bollywood stars who pledged to donate their organs

A non-direct anonymous donor is when a person offers to donate a kidney that could go to anyone they match who needs a kidney transplant. In India, a non-related donor needs permission of an Authorisation Committee established by the state to donate his/her kidney. The Authorisation Committee is a governmental body that regulates living donor transplantations by reviewing each case and ensuring that the living donor is not exploited for monetary considerations.

How does living donation affect the donor?

Once a person has decided to become a donor, he/she has to undergo a thorough medical examination before donating a kidney. All the medical parameters of the potential donor are checked and only once it is confirmed that the person has no medical issues, will he/she be permitted to become a donor.

For those who are wondering how the surgery is performed — Dr Madhuri Jaitley, Associate Consultant at Department of Nephrology in Paras Hospital, Gurugram was quoted as telling the Indian Express that the procedure is performed using the laparoscopic technique.

She added that the length of stay in the hospital will vary depending on the individual donor’s rate of recovery although the usual stay is one to three nights.

Post the hospital stay, a living donor has an additional four to six weeks of recovery time. Doctors advise that kidney donors should avoid driving for two weeks and also should avoid picking up heavy items for six weeks following surgery.

Additionally they should keep away from heavy contact sports where they could get injured accidentally and should resume normal life gradually. Depending on the type of work the living donor does, he/she can return to their job as soon as two or as long as eight weeks after surgery.

Post surgery, a living donor also has to follow some dietary restrictions; one should keep away from stressors like alcohol, caffeine and high protein foods. A living kidney donor is recommended to have an annual follow-up with a nephrologist (kidney specialist). 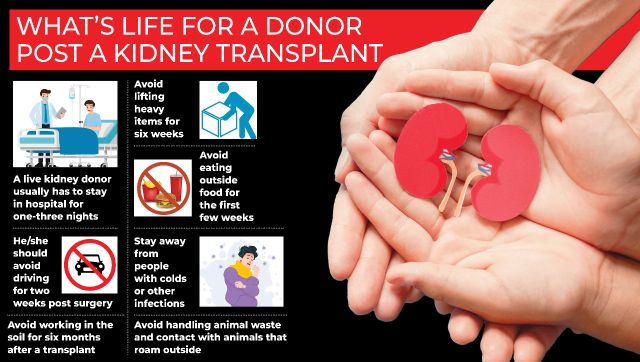 Are there any long-term risks to live kidney donation?

There are several myths about being a live-kidney donor. One of the most prominent one is that life expectancy is affected. However, doctors debunk this notion.

Several studies have found that living donation does not change life expectancy, and does not appear to increase the risk of kidney failure. In fact, studies show that people who donate a kidney outlive the average population. One study showed how 20 years after donating, 85 per cent of donors were still alive.

What are the benefits of a living kidney donation?

For patients who are eligible for a kidney transplant, a kidney from a living donor is the best treatment.

According to medical experts, a kidney from a living donor usually lasts longer than kidney from a deceased donor. Moreover, a living kidney donation can reduce or even prevent the patient’s need for dialysis.

When a recipient has a living donor, the wait time for transplant is shorter and the transplant can be scheduled. This allows for donations to take place when the recipient is in good health and when it is convenient for both the donor and the recipient.

Many people who have donated a kidney also say that helping someone in need is a positive personal experience.