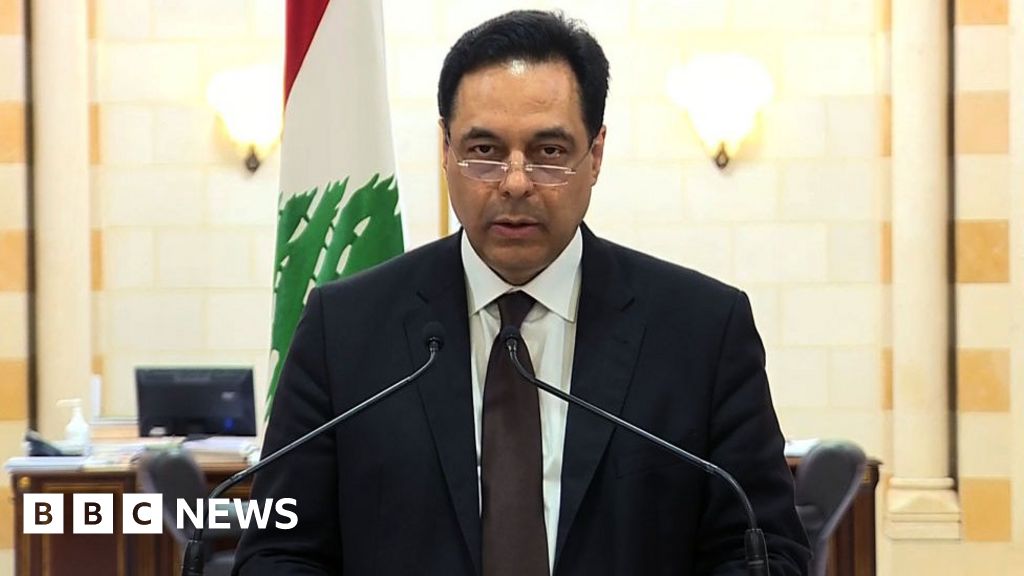 Lebanon’s government has resigned amid mounting anger over the explosion on Tuesday that devastated parts of Beirut and left more than 200 people dead.

The announcement was made in a national TV address by Prime Minister Hassan Diab on Monday evening.

Many people have accused the country’s leaders of culpability through their alleged negligence and corruption.

Protesters have taken to the streets and clashed with police for a third straight day.

The massive blast was caused by the detonation of 2,750 tonnes of ammonium nitrate stored unsafely at the port for years.

President Michel Aoun has asked the government to stay on in a caretaker capacity until a new cabinet is formed.

What did the prime minister say?

Mr Diab, who was appointed prime minister in January after months of deadlock, said his government had “gone to great lengths to lay out a road map to save the country”.

But corruption in Lebanon was “bigger than the state” itself, and “a very thick and thorny wall separates us from change; a wall fortified by a class that is resorting to all dirty methods in order to resist and preserve its gains”, he said.

“They knew that we pose a threat to them, and that the success of this government means a real change in this long-ruling class whose corruption has asphyxiated the country,” he added.

“Today we follow the will of the people in their demand to hold accountable those responsible for the disaster that has been in hiding for seven years, and their desire for real change,” Mr Diab said.

The prime minister has presented himself in the speech a reforming leader blocked by endemic corruption dating back years, BBC Middle East correspondent Tom Bateman says.

Parliament will now have to decide on a new prime minister – a process involving the same sectarian politics at the root of protesters’ discontent, our correspondent adds.

Power is shared in Lebanon between leaders, several who were major figures in the 1975-1990 civil war, representing the countries different religious constituencies.

On Monday the death toll from the explosion rose to 220 with 110 people still missing, Beirut city governor Marwan Abboud was quoted by the al-Marsad Online news website as saying.

Many foreign workers and lorry drivers were among the missing, he told Al Jadeed TV channel.

The huge blast damaged buildings in a radius of several kilometres in Beirut, leaving more than 200,000 homeless or living in homes with no windows or doors.

On Monday police fired tear gas at angry protesters during tense clashes in the capital which continued following the government’s resignation.

More on the explosion in Beirut

Why did the government resign?

Discontent in Lebanon has been brewing for years. In late 2019, a plan to tax Whatsapp calls spilled over into mass protests against economic turmoil and corruption, which eventually led to the government’s resignation.

Coronavirus had curbed the protests, but the financial situation has continued to worsen and last Tuesday’s explosion was seen by many as the deadly result of years of corruption and mismanagement.

The government’s plans to investigate were not enough for many who have lost all faith in the political elite. Before the cabinet’s resignation, a number of ministers had already offered to step down.

But the end of this government does not necessarily mean an end to the anger. Last year’s protests led to the formation of the government which has now been forced to step down over the same accusations of corruption.