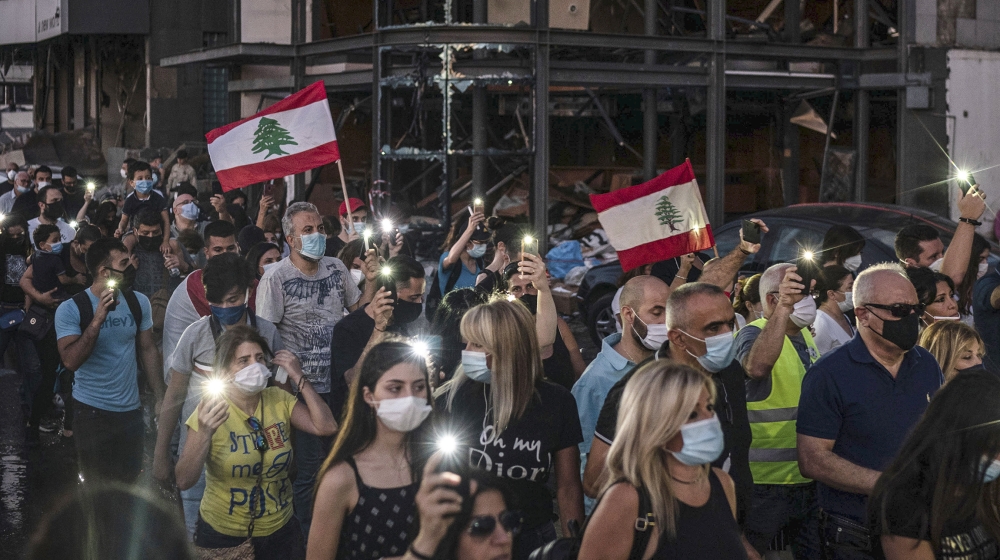 Beirut, Lebanon – Lebanese Prime Minister Hassan Diab is due to address the nation, in a speech widely expected to officially announce his resignation after several ministers stepped down.

Tensions have been boiling over in the country following a massive explosion that on Tuesday tore through the capital, Beirut, killing some 200 people and wounding 6,000 others.

Earlier, Justice Minister Marie Claude Najem was the latest minister to announce her resignation while Finance Minister Ghazi Wazni arrived to a cabinet session with his resignation letter but held on to it until after the session.

Foreign Minister Nassif Hitti had announced his resignation a day before the explosion.

Lebanon’s constitution says that a cabinet is considered resigned if more two-thirds of its original members resign. The youth and sports, telecoms and displaced affairs ministers have said they will announce their resignations from Diab’s 20-minister cabinet if he does not formally announce it.

“We really need help … just to get rid of all those awful people that we have running this country.”#Beirut blast leaves hundreds of thousands of residents homeless. pic.twitter.com/7AKXNA9xpO

Tuesday’s explosion, which was caused by highly explosive ammonium nitrate that was stored at Beirut’s port for more than six years, has fuelled popular anger and upended politics in the crisis-hit country. It has led to angry, violent protests in which 728 people were wounded and one police officer killed on Saturday amid a heavy crackdown by security forces.

A government source familiar with the cabinet discussions told Al Jazeera that “many ministers are now under pressure to resign from powerful political actors who expected a ‘business-as-usual’ cover-up” of the explosion from Diab.

“Instead, the prime minister is pressing ahead with the port explosion investigation, which would reveal who actually benefited from the explosives being stored there for so long,” the source said. “The lifting of banking secrecy laws against key individuals in the investigation has worried many people who have things to hide about the explosives.”

The investigation is being led by a committee headed by Diab and a number of ministers as well as the heads of the Lebanese Army, State Security and General Security. Local groups, international organisations and nations including France have called either for the involvement of international experts or an international investigation, citing a lack of credibility in Lebanese authorities, many of whom were aware of the presence of the dangerous explosives.

The source also said that ministers were resigning from the government over opposition among their political backers to a forensic audit of Lebanon’s central bank, “which would finally prove the corrupt relationship between previous governments, the central bank, and the heads of the Lebanese banks while they asset-stripped the Lebanese state and ordinary depositors”.

Diab’s cabinet was appointed by the Lebanese political establishment in February after massive anti-establishment protests demanding an overhaul of the country’s political system. But six months on, it has failed to implement the sweeping political and economic reforms that it had promised.

Eight members of parliament have also either announced their resignations or formally resigned in the aftermath of the blast, including MPs Henri Helou, Neemat Frem, Paula Yacoubian, Marwan Hamadeh, Michel Moawad and the Kataeb Party’s three MPs.

Before the explosion, Lebanon was suffering from its deepest-ever economic crisis which led to the currency losing some 80 percent of its value against the US dollar and poverty soaring above 50 percent.

It now also has to contend with the destruction of wide swathes of Beirut, including hubs of its lucrative tourism and nightlife scene, and a tense political crisis.