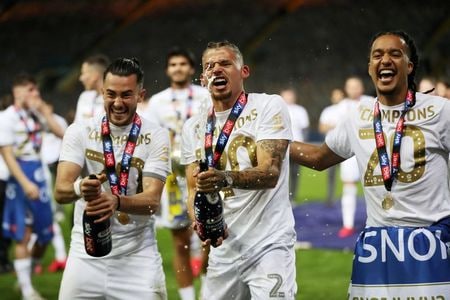 The 23-year-old Harrison spent the previous two campaigns on loan at Elland Road making 91 appearances and scoring 10 goals in all competitions and Leeds said they completed his loan deal with a view to signing him permanently.

Gelhardt, 18, who made his Wigan debut in August 2018 aged 16 in the League Cup, joins Leeds for an undisclosed fee.

The duo are Leeds’ latest recruits in the transfer window following the permanent arrivals of on-loan signings Helder Costa and Illan Meslier earlier this month.

A former youth player with Manchester United and Liverpool, Harrison has represented England at under-21 level.

He played all 46 league games for Marcelo Bielsa’s side last season, as they ended a 16-year wait to return to the English top-flight by winning the second-tier Championship.

Gelhardt, who has represented England from under-16 to under-18 levels, played 19 times in all competitions for Wigan in the Championship last season.