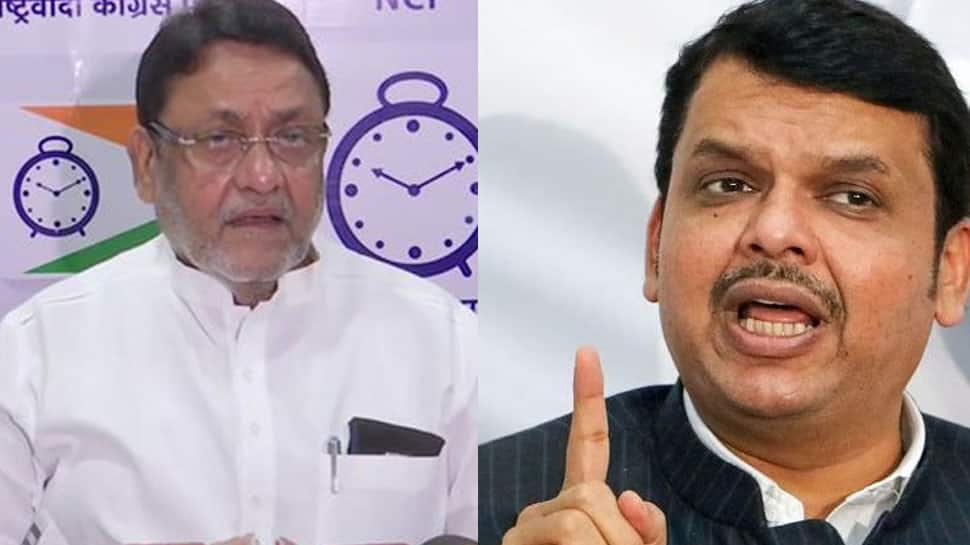 Mumbai: Sharpening his attack on former Chief Minister and BJP leader Devendra Fadnavis, Maharashtra Minister and Nationalist Congress Party (NCP) leader Nawab Malik on Thursday sent a legal notice to the former over his allegations that drugs were recovered from his residence.

The legal notice to Fadnavis was sent by Malik’s daughter.

“My daughter has sent a legal notice to former CM & BJP leader Devendra Fadnavis over his allegation that drugs were found at our residence,” NCP leader Nawab Malik said during a press conference.

Mumbai | My daughter has sent a legal notice to former CM & BJP leader Devendra Fadnavis over his allegation that drugs were found at our residence. We will file a defamation case against Fadnavis, if he will not apologise to us: Maharashtra Minister & NCP leader Nawab Malik pic.twitter.com/K0FW1RQ0OF

Malik had on Wednesday accused Fadnavis of trying to protect NCB Zonal Director Sameer Wankhede, adding that the former chief minister was responsible for “criminalisation of politics”.

Addressing a press conference, Malick said, “I am fighting against a man who is framing innocent people in fake cases. Devendra Fadnavis is not only diverting my issue but also trying to defend one officer (Sameer Wankhede).” Malik alleged that Fadnavis shielded a number of goons and criminals like Riyaz Bhati and Munna Yadav during his tenure.

The NCP leader further said, “One Riyaz Bhati, a close aide of Dawood Ibrahim, was arrested at Mumbai airport with a fake passport. Fadnavis must answer who is Riyaz Bhati? Everyone knows he has links with the underworld don Dawood Ibrahim. Why was he arrested and let off in 2 days? Why was Riyaz Bhati seen with you and even at BJP events? He was also seen at events where PM Modi was present. How did a man like him reach the prime minister`s event?”

The Maharashtra Minister further claimed that Wankhede was also a part of the DRI probe when fake notes worth Rs 14.56 crore were seized from Bandra Kurla Complex (BKC) in 2017.

“It is due to the friendship between Sameer Wankhede and Devendra Fadnavis that criminal activities flourished in Mumbai and Maharashtra during the BJP government`s tenure,” Malik added saying Fadnavis is responsible for “crimilisation of politics”.

“Rs 25 crore was sought to release Aryan Khan when the cruise ship was raided, but later, the parties settled for Rs 18 crore. Why was Aryan Khan invited on the cruise in the first place?” Malik asked.

“Nawab Malik has dealings with people from the underworld people convicted in 1993 Mumbai bomb blasts case. He purchased land from convicts of the case at rates cheaper than market rates. Was this deal to save prime land from being forfeited under Terrorist and Disruptive Activities (Prevention) (TADA) law?” asked Devendra Fadnavis at a press conference.

Malik has been opposed by the BJP following his continuous war of words with Narcotics Control Bureau (NCB) zonal director Sameer Wankhede.

Reportedly, Nawab Malik`s son-in-law Sameer Khan was arrested by the NCB in an alleged drug case on January 13 this year. The case has come into light amid the war of words between Mailk and Sameer Wankhede.