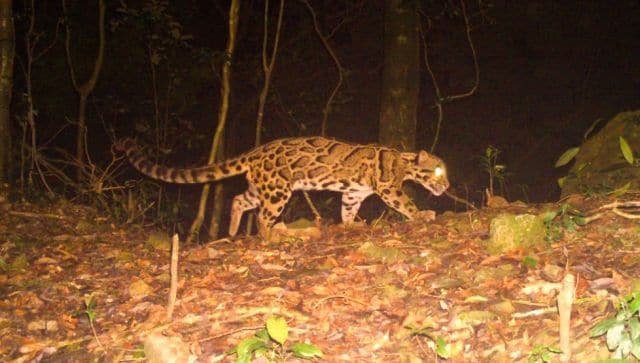 Leopards are known for their agility and adaptability. Maybe this is the reason why they are present all across India. A video recently shared on Twitter by Indian Forest Service (IFS) officer Parveen Kaswan shows a leopard perfectly climbing up and down a coconut tree without facing any issues. At the beginning of the video, the big cat can be seen very cautiously climbing down a coconut tree while looking below carefully as if it senses some danger in its surroundings. As it almost comes down the tree, another leopard jumps out of the bushes and quickly starts climbing the tree to catch it.

Interestingly, the leopard, who was getting chased, saw the attack coming way before it was even visible in the frame. It just quickly starts clambering back up the tree before the other leopard even starts climbing. For some reason, the second leopard leaves the first one and climbs back down.

The video was tweeted with the caption, “Look at the agility of these cats. Somewhere from MH via WhatsApp. That is why leopards are omnipresent in India.”.

In a follow up tweet, Parveen Kaswan stated that leopards are very strong and agile, and that they are the most adaptive of the cats in his opinion. He added that their food range is very wide as well.

Leopards are agile and can adapt to all kind of places. From Rocky & dry hills of Rajasthan to High forest of north east. From cities like Bombay & gurgaon to unmanned lands of Himalayas.

Their food range is also wide. Strong and agile. In my opinion most adaptive of the cats. pic.twitter.com/q7TrC3mrly

In another tweet, Kaswan shared a picture of a leopard that he had clicked. The IFS officer wrote that tea gardens are a favourite spot of these apex predators. Leopards get many benefits in tea gardens such as easy food, shade and the ability to raise their cubs.

They are very much present in tea gardens and sugarcane farms.

Tea gardens are one of their favourite spot. Easy food. Shade. Habitat. And can raise cubs very easily.

Magnificent creatures. Pictures are mine. pic.twitter.com/gRzDvV117D

While replying to the video, many users pointed out the agility of these animals.

True,
Superb agility!
(I believe even monkeys wouldn’t climb trees that fast)..
Such agility would obviously make them one of the most dangerous predators in the wild.
👌

This is from Sinnar taluka,Nashik district ,Maharashtra