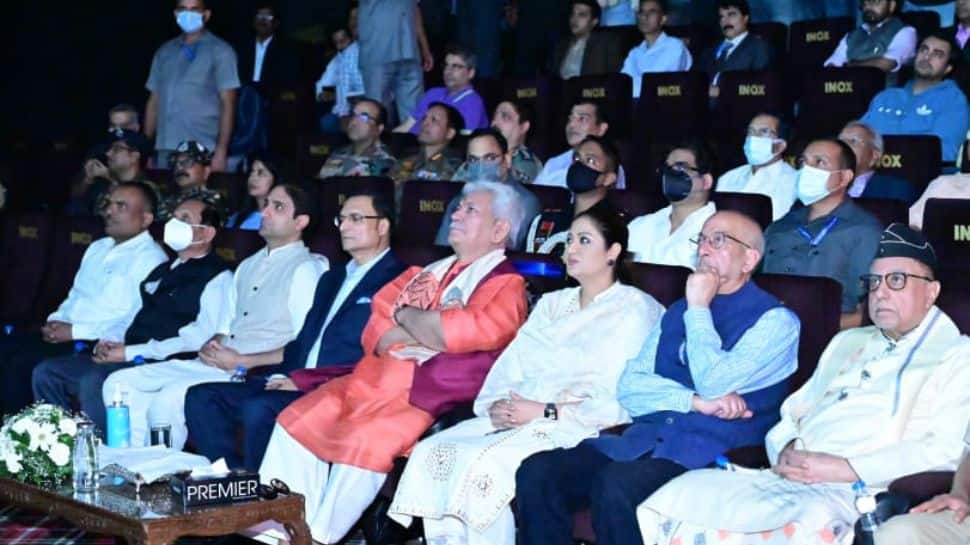 Srinagar: Kashmir Valley finally has its first multiplex theatre. After more than three decades, the people of Kashmir would be able to see films on a bigger screen. The LG of Jammu and Kashmir, Manoj Sinha, inaugurated the multiplex. Chairman of the Essel Group, Subhash Chandra Goenka, was also present during the Inauguration ceremony. The valley used to be one of the favourite destinations for Bollywood directors for film shoots. But with the start of Insurgency, the trend of film shootings stopped in the valley, further leading to closure of all the cinema halls. Kashmir had around 15 cinema halls and all of them were closed decades ago. Today is a historic day for Kashmir as cinema returned to the valley.

Inaugurated INOX multiplex theatre in Srinagar. Congratulations to the people, Sh. Vijay Dhar & INOX Group. A major Socio-economic revolution is sweeping through J&K in the last 3 years. It is reflection of a new dawn of hope, dreams, confidence and aspirations of people. pic.twitter.com/VhdiVTHhQw
— Office of LG J&K (@OfficeOfLGJandK) September 20, 2022

Kashmir had dozens of Cinema Hall’s till early 1990, but the theatres in the valley were forced to shut down owing to a rise in terrorism and attacks. The Government during 1999-2000 also tried to re-open a few cinema Halls but there were attacks on them leading to the closure again. The Dhar family owned one of the oldest cinema halls in the valley called ‘Broadway’. It was also opened for a brief period and later shut forever. The owners believe that Bollywood and Kashmir have had a strong connection and it should grow stronger.

Vikas Dhar Owner, Multiplex. “I can’t even explain it, I don’t think my face is fully conveying the kind of happiness I am feeling but it’s an incredible day and my dreams have come true. This was a passion and it reached its culmination, it’s an unbelievable day for me. Kashmir never left the heart of the cinema world and cinema left the heart of Kashmiris. The interval is over and It’s time to watch the movies. Given the opportunity, I would want to take the cinema to every district of Kashmir.”

The Multiplex located in Srinagar’s Shivpora area will have three screens and a total seating capacity of around 520 people. The building is built as any Multiplex but with a touch of Kashmir in it. The owners have incorporated Kashmiri Traditional ‘Khatamband’ Ceiling and Paper Machie designs. The Inox management says it’s a unique design and for the first time local artisans have been used while making the multiplex.