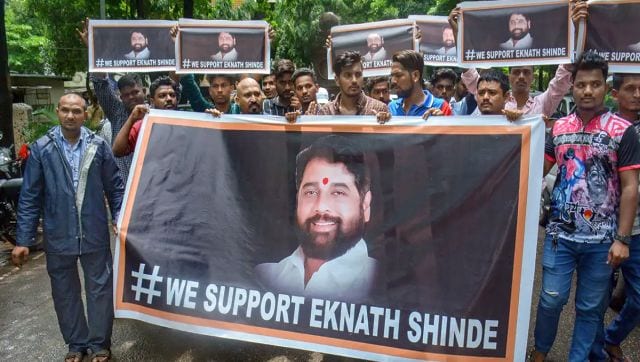 Dissident leader Eknath Shinde, who has triggered a crisis in Maharashtra, says he has the support of 33 other MLAs — 30 from the Shiv Sena, two from Prahar Janshakti Party and one other Independent. The rebels want the Shiv Sena to end their ‘unnatural alliance’ with the NCP and Congress

The Maharashtra political crisis intensified on Wednesday with Eknath Shinde, leading a band of MLAs to Guwahati from Surat and refusing to return to Mumbai to discuss the future with other Shiv Sena leaders.

Later in the day, the collapse of the Maha Vikas Aghadi (MVA) alliance — of Shiv Sena, Nationalist Congress Party (NCP) and the Congress — became even more imminent with Uddhav Thackeray addressing the state and party workers.

An embattled and emotional Uddhav added, “A blow by the own is what would hurt the most. I will submit my resignation if they come in front of me and demand the same. This is not the greatest challenge I have faced. We will return and face many more. I am not a person who would run away from such challenges.”

Later in the night, visuals emerged of Uddhav Thackeray vacating his official residence in south Mumbai and moving to family home — Matoshree — in suburban Bandra.

Visuals showed Sena workers raising slogans and showering petals on Uddhav as he left his official house along with his family members — wife Rashmi Thackeray, sons Aaditya, who is a Cabinet minister, and Tejas Thackeray around 9.50 pm.

Many workers were seen carrying placards and party flags, raising slogan of ‘Uddhav Thackeray Zindabad’ as some of them fought back tears.

The developments in Mumbai took place even as Eknath Shinde continued camping in Guwahati along with the support of 34 MLAs. The rebel camp, led by Shinde, has asked that the Sena end its ‘unnatural alliance’ of Sharad Pawar’s party and the Congress for the party’s survival.

“To save the party and the Shiv Sainiks, it is vital that the unnatural alliance be junked. It is important to make this decision in the interest of Maharashtra,” said Shinde.

As the crisis refuses to die down, let’s take a look at who these rebel MLAs are and what are their demands from the Shiv Sena.

As per a letter written to Governor Bhagat Singh Koshyari, Eknath Shinde has the support of 34 MLAs — 31 from Shiv Sena (including Shinde), two from Prahar Janshakti Party (PJP) and one is an Independent legislator.

The rebel MLAs include Pratap Sarnaik, who represents the Ovala-Majiwada constituency in Maharashtra Assembly. Last year too, Sarnaik, who is facing a probe by the Enforcement Directorate in a money laundering case, had written to chief minister and Sena president Uddhav Thackeray, saying the party should team up with the BJP to save its leaders from action by central agencies.

Sarnaik is joined by Anil Babar, the MLA of Khanapur as well as Bharat Gogawale, who represents Mahad.

According to reports, this number has increased by four as more MLAs flew into Assam from Maharashtra.

What did they say?

The MLAs wrote a resolution on Wednesday saying there was an “enormous discontent” among Shiv Sena cadres for being allied with the “ideologically opposite” NCP and the Congress, and for forging the Maha Vikas Aghadi government.

In their seven-page resolution, they called Eknath Shinde their group leader and Bharat Gogawale as the chief whip of Shiv Sena legislature party in the Maharashtra Legislative Assembly.

Also read: From loyalist to rebel: The reasons for Eknath Shinde’s revolt against Shiv Sena

The letter issued by the Shinde camp stated that the Sena leadership’s decision to sever ties with BJP after the 2019 Maharashtra polls had a “negative” impact on the party cadres and voters.

The MLAs added that they and Sena workers were facing “humiliating queries” from voters for supporting the ideological opponents. “We have also been subjected to a lot of criticism for being part of this corrupt Maharashtra government,” the letter stated, adding, “The ideology of our party’s leader the late Balasaheb Thackeray was to give a clean and honest government to the people of Maharashtra and also without compromising on the principle of Hindutva, which was defeated on the first day itself by aligning with the opposing ideologies.”