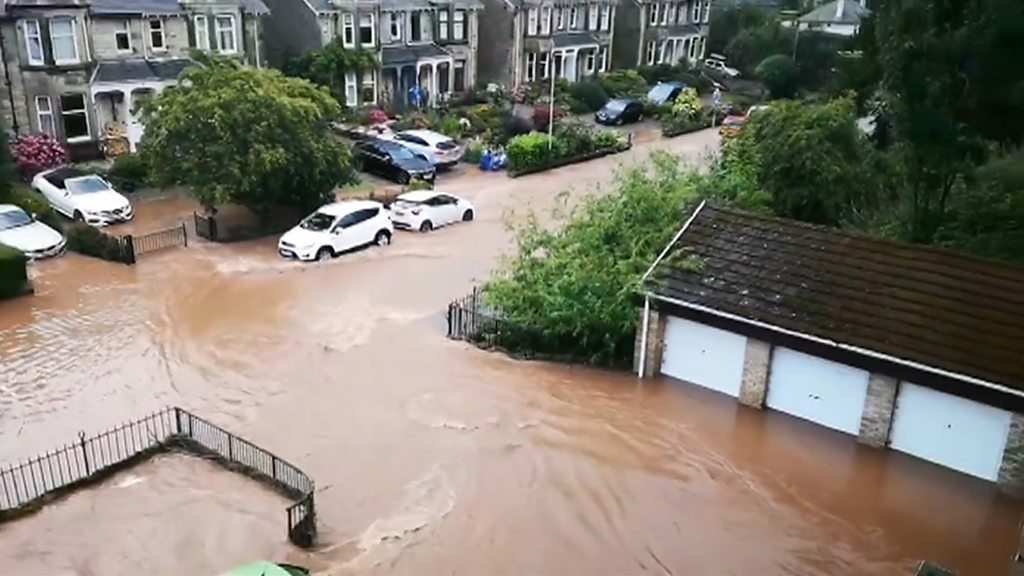 A major incident has been declared in Fife after torrential rain and thunderstorms battered many parts of central and eastern Scotland.

That also resulted in caravans being evacuated and 218 people spending the night in emergency accommodation.

A number of homes have also been flooded and many schools in the area are closed.

It comes as emergency services were called to a train derailment near Stonehaven. The alarm was raised at about 09:40 and emergency crews remain at the scene.

Following heavy rain and thunderstorms overnight there are also reports of homes in North Lanarkshire and Perthshire being flooded.

Fife’s Local Resilience Partnership (LRP) was activated following a number of incidents across the Kingdom.

After a major landslide at Pettycur Bay Holiday Park, 28 people had to be rescued in the early hours with 218 people evacuated from their caravans overnight and given emergency accommodation.

Police, fire and council services dealing with flooding issues in Freuchie, Cairneyhill, Cardenden, Kinglassie, Culross and Lochgelly. As a result, a number of road closures are in place and local diversions are in operation.

A number of people have been evacuated from their homes, and various schools and roads are closed across the Kingdom. The main East Coast rail line is also closed due to the landslide.

Superintendent Sandy Brodie from Fife’s LRP said: “Public services are working together to deal with this incident and taking guidance from public health to make sure all current guidance is being followed when supporting those affected.

“I want to reassure residents that we are working to get services back up and running as quickly as possible and will continue to monitor the situation. In the interim, I would ask people not to travel unless absolutely necessary”

An NHS Fife spokesman said: “Our staff have worked tirelessly overnight to manage the unprecedented flooding at our Victoria Hospital site.

“It has been mainly staff, rather than patients, that have been affected by the flooding in car parks A and B and all staff have been provided with transport to get them home safely this morning after their shift.

“A recovery effort is now under way to remove the damaged cars.”

The Scottish Fire and Rescue Service said it was called to multiple reports of flooding in the Perthshire area, with many domestic properties affected.

Perth and Kinross Council said several roads in the area were still impassable due to flooding.

Thunderstorms and torrential rain caused travel chaos for people in the North-east. Many schools, which were due to open for the first time in five months, have remained closed.

The intensity of the rainfall left the drainage system on many roads in Aberdeenshire unable to cope, leading to huge pools of standing water.

A number of residents in Aberdeen became trapped by the rising water and had to be rescued by dinghy.

Several Schools, including three academies in Aberdeenshire are shut.

Dozens of rail services to and from the North-East have been cancelled.

A major clean up operation was under way in Stonehaven after streets in the city centre were flooded in the early hours. One business, the Carron Fish & Chip Bar was completely under water. The owners said it was their fourth flood in nine years and it had caused extensive damage.

Dunnottar school also said it could not reopen after lockdown after the area around the building was completely flooded and impassable even on foot.

A Met office yellow weather warning for thunderstorms is in place from 15:00 to 21:00.

It warned that some places were likely to see “further severe thunderstorms”, but with “significant uncertainty in location and timing”.

The fire service said a number of homes were flooded in Airdrie, while they also attended flooding on the M8 after the dual carriageway was inundated with water between junctions five and seven.

Police were advising people to avoid the area completely as diversion routes were also becoming flooded and impassable.

A Police Scotland spokesman said: “We were made aware of flooding on the M8 between junctions 5 and 6 in Lanarkshire shortly before 4am on Wednesday, 12 August.

“No injuries have been reported and officers have assisted partner agencies.”

‘Car is a write-off’

Matty Gale, from Lincolnshire, said he woke up in his hotel in Falkirk to find his car under water.

He told the BBC: “I think my car is pretty much a write-off now. The water is up to the wheels. I can hear car alarms going off – the water has got into the electrics. I couldn’t get a wink of sleep last night because of how loud the thunder was and the lightning was blinding.

Several Primary schools in the Stirling Council area were left without internet access due to the impact of the storms.

The fire service control room in Edinburgh said they had received more than 500 calls through the night amid widespread thunder and lightning and torrential rain.

All flights due to land at Edinburgh Airport are being diverted or delayed.

BT’s incident management team said a major outage at an exchange in Edinburgh, caused by the weather, was affecting about 100,000 customers’ broadband on BT, EE and Plusnet in the city and surrounding area.

It was reported at 06:30 and engineers were on site working on the issue.

Highland Council said it was having “major issues” with internet and network issues following the thunderstorms.

It said the problems affecting its sites and home working access were due to the flooding of the exchange in Edinburgh.

Sumburgh Airport was closed to all arriving and departing aircraft on Wednesday morning due to the adverse weather conditions but remained open for emergency flights.

ScotRail posted pictures of the water covering the tracks on social media.

Some routes were not operating trains at all.

At 09:25, ScotRail said there were no trains operating on the following routes:

‘Don’t think they’re going to do anything…’: Biden on China’s behaviour after Pelosi’s Taiwan visit

Hindu family attacked by dozen men in Pakistan for ‘overtaking’