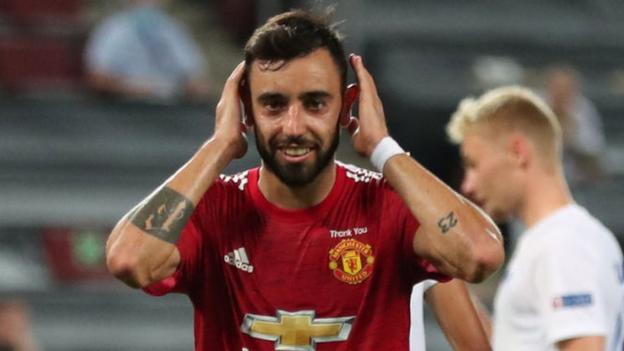 Manchester United needed an extra-time penalty from Bruno Fernandes to finally see off a spirited FC Copenhagen and set up a potential Europa League semi-final against Wolves.

United were poor for much of the first half in the heat of Cologne but still had a penalty overturned and a goal ruled out by the Video Assistant Referee.

Ole Gunnar Solskjaer’s side improved and dominated the second half but could find no way past inspired goalkeeper Karl-Johan Johnsson, with Fernandes and Mason Greenwood also each hitting the post and Marcus Rashford having another effort disallowed.

Fernandes finally broke through in familiar style, keeping cool to drive in United’s 21st spot-kick of the season at the start of the extra period to extend their marathon season by another week.

Johnsson was magnificent between the posts for Copenhagen – ending the night with 13 saves as United rained down 26 efforts on goal all told – while the Danish runners-up failed to have a single shot on target.

United – who won this competition four seasons ago – will now face either Premier League rivals Wolves or Europa League specialists Sevilla in the last four in Dusseldorf next Monday night.

No way past for United

Three hundred and sixty-four days after Solskjaer started his first full season in charge of United, he is now two games away from a possible first trophy.

The January signing of Fernandes has already delivered a third-placed finish and Champions League football and the Portuguese midfielder was again the eventual difference maker on a draining night in scorching heat.

The temperature was still 32C at kick-off at 9pm local time and United made a poor start – Fred’s error almost letting in Mohammed Daramy, before Brandon Williams had to head away from the goal-line.

But despite their lethargy, United always carried a threat and were briefly awarded a penalty for a shove at a set-piece before VAR flagged an offside in the build-up.

Greenwood finished brilliantly off the far post but the strike was correctly called back for another offside before Solskjaer witnessed a far better second half.

Greenwood fired against the post again, with his left foot this time, Rashford tapping in but again from an offside position before Fernandes thundered a shot against the opposite post from range.

Johnsson’s individual showreel then threatened to throw a spanner in the works.

Perhaps the Swedish keeper’s best save denied Anthony Martial, who eventually won the decisive penalty thanks to a push from former Brentford defender Andreas Bjelland.

Fernandes fired into the corner without his trademark hop on approach to ensure a 17th European semi-final for United.

Having ‘intensive engagement’ with India, other key oil consuming nations on Russian oil price cap: US