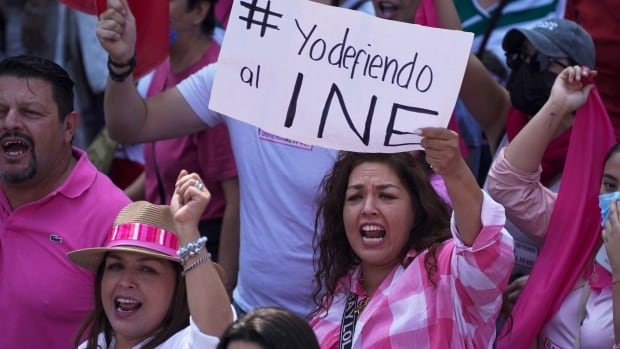 Canadians have gotten used to a certain politician south of the border who has a habit of only accepting election results when he wins, who invites his followers to lay siege to the capital when he loses, and who seeks to replace neutral election officials with people loyal to him.

In fact, there are two such leaders on the continent. One just saw his prestige within the Republican Party take a beating in the U.S. midterm elections. The other is Andrés Manuel López Obrador — still riding high as elected president of Mexico.

Donald Trump failed thoroughly this month to undermine the U.S. electoral system from the outside. But López Obrador — better know in his country as AMLO — is in a far stronger position as a sitting president with Mexico’s congress on his side, and he has set his sights on dismantling the country’s independent elections authority.

Speaking in New York City this week, former U.S. president Barack Obama warned that “the threat to democracy doesn’t always run along a conservative/liberal, left/right axis. This has nothing to do with traditional partisan lines or policy preferences. What we are seeing, what’s being challenged, are the foundational principles of democracy itself.”

Obama could have been describing the curious affinity between Donald Trump and AMLO, who inhabit different ends of the left-right spectrum but who share a tendency to challenge principles of free elections and declare electoral institutions to be corrupt.

Trump has referred to AMLO as a “socialist” but also a “good guy,” a “great gentleman” and a “friend of mine.” On Tuesday, AMLO seemed to sympathize with Trump’s current struggles: “He’s a capitalist and he’s not perfect, but he’s a good person and I respect him.”

Both men have used the language of “only I can fix it” to describe their missions to weed out the supposed “deep state” actors they claim are flouting the true will of the people. In AMLO’s case, the deep state is embodied by Mexico’s National Electoral Institute, the country’s equivalent of Elections Canada, known by its Spanish-language acronym INE.

‘Hands off the INE’

This weekend, Mexico City and two dozen regional centres saw massive protests under the slogan “Hands off the INE.” The protests brought hundreds of thousands of Mexicans into the streets — the biggest popular challenge AMLO has faced since winning office in 2018.

AMLO dismissed the marchers’ concerns about the INE as “just an excuse.”

The INE, previously called the Federal Electoral Institute, began life in 1990 at the beginning of Mexico’s transition away from one-party rule.

The INE worked to change a political system that for seven decades offered only a simulacrum of democracy. And it succeeded: the past three elections have seen each of Mexico’s three main parties win office in turn, with peaceful transfers of power each time.

AMLO has a history of poor relations with, and allegations against, the INE.

During the 1990s, the Party of the Democratic Revolution, of which AMLO was a member, enjoyed several victories at the state level. But AMLO lost on the two occasions he ran for governor in his own state of Tabasco, and on both occasions he claimed fraud — a pattern he would repeat throughout his political career.

In 2000, AMLO was elected mayor of Mexico City, a job he held with considerable success and high approval ratings. That left him ready to mount a presidential campaign in 2006 which saw him run neck-and-neck against Felipe Calderón of the centre-right National Action Party.

When the federal election authority declared Calderón had prevailed by a quarter of a million votes (0.58 per cent of the total) in an election that European Union observers declared to be fair, AMLO called on his supporters to set up a permanent protest camp in the centre of Mexico City. That blockade remained in place for 48 days, causing serious financial losses in the city.

AMLO continued to be a fixture on the Mexican political scene until the stars finally aligned for him with a new party of his own creation — MORENA — four years ago.

“The great paradox,” former Mexican ambassador to Washington Arturo Sarukhan told CBC News, “is that López Obrador himself is president today in Mexico thanks to these institutions that were created over the past two or three decades in Mexico, and which allowed for electoral processes to be run cleanly, fairly, transparently.”

Other countries drawn into dispute

AMLO is proposing to eliminate the INE and replace it with a new body over which he would have considerable control. The seven individuals who would run the new elections agency — individuals AMLO has said would be chosen by “the people” in some unspecified way — would come from a group of 60 nominees.

Both Prime Minister Justin Trudeau and U.S. President Joe Biden are expected to travel to Mexico next month for the traditional “Three Amigos” summit.

Although Foreign Affairs Minister Mélanie Joly met with her Mexican counterpart Marcelo Ebrard this week at the G20, threats to the independence of Mexico’s election body were not among the topics they discussed.

But the U.S. government has been drawn into the fray.

“Independent institutions free of political influence are a cornerstone of democracy, and non-partisan electoral institutions in particular ensure that all voices are heard in fundamental democratic processes,” said a statement from the U.S. State Department.

The Russian Embassy in Mexico City, eager to curry favour with a Mexican president who has described Vladimir Putin as “a friend,” subsequently denounced “another intervention in Mexico’s internal affairs by the government of the United States.

“This time, the representatives of a ‘free democracy’ have decided to advise Mexico on the best way to carry out electoral reform,” the embassy said in a media statement.

“This reform, if adopted, will radically change the electoral system in Mexico and the management of its electoral process,” they concluded.

“Previously all constitutional electoral reforms had been proposed by the opposition. This is the first time that the president, whose political supporters have the majority in the Congress, initiates such ambitious constitutional changes, which will significantly affect the next elections to take place in 2024.”

The commission said the reform law “should be reconsidered as it is not in line with the international standards and best practices in the electoral field.”

AMLO does not see himself as merely another in a long line of presidential administrators, but rather as a historic figure whose arrival has inaugurated what he calls the “Fourth Transformation” of Mexico (the first three being the War of Independence begun in 1810, the reforms of Benito Juarez in the mid-19th century, and the Mexican Revolution of 1910).

That grandiose vision, combined with his history of disputing election results, leads some Mexicans to fear what AMLO might do as he approaches the end of his six-year term.

Some of his critics see his plan to abolish Mexico’s independent election authority as part of a plan to smooth the path of an anointed successor, or perhaps even to try to hang on to power himself — even though Mexico’s constitution strictly forbids a second run for office.

AMLO has denied any such intent, saying that the INE is “corrupt” and he merely wants to clean it up while streamlining the system for electing the Mexican congress.

‘Return to the past’

At the weekend’s mass rally at Mexico City’s Angel of Independence monument, former head of INE José Woldenberg reminded the crowd how the independent authority had transformed Mexico since the 1970s.

“As a country, we were able to build a budding democracy. We left behind the country of only one party, of oppressive presidentialism, of elections without real options or competition,” he said.

“I want to call your attention to one fact: peaceful, constitutional transfer of presidential power occurred, for the first time in Mexico, thanks to that democratizing process. In almost 200 years of independent life, our country had never achieved it.

“Mexico cannot go back to an electoral institution aligned with the government, incapable of guaranteeing impartiality in the whole electoral process. Our country doesn’t deserve to return to the past.”

AMLO’s supporters don’t appear to acknowledge the progress of the past 30 years, Sarukhan said.

“It’s like the debate between creationists and evolutionists. Many Mexicans, including yours truly, believe that democracy has been slowly evolving in Mexico over the past decades,” he told CBC News. “Central to this has been the slow creation, modernization of a fully autonomous, effective centralized electoral authority.

“López Obrador believes that democracy in Mexico started with his electoral victory.”

This week, AMLO organized his own march to the Angel of Independence for November 27, inviting his followers to show support for the proposed overhaul and promising to create a new corps of “incorruptible” election overseers, “not lackeys, employees of the oligarchy, people without moral scruples.”