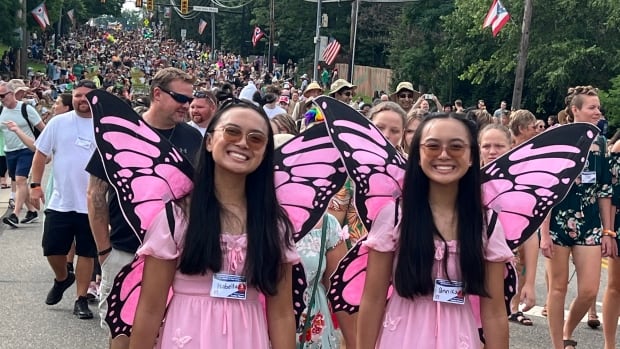 For Marko and Nico Martinovic, identical twins from Toronto famous for the pranks they post on YouTube, there’s probably no better place to learn about other twin hijinks than the world’s largest gathering of lookalikes.

“We swapped during school, we did that many times,” said Marko Martinovic, 30.

“So we ask people exactly what have they done as … twins,” his brother, Nico chimed in.  “One [pair of] twins dropped out of school together. Other twins lied to each other’s wives. So it’s amazing stories.”

The Martinovics, dressed in matching wine-coloured T-shirts and caps, spent this past weekend in Twinsburg, Ohio, about 40 kilometres southwest of Cleveland, at the annual Twins Day Festival.

It was founded in 1819 by identical twin brothers, Moses and Aaron Wilcox. The town, with a population just under 20,000, sets aside a few days each year to celebrate “the uniqueness” of twins and multiples.

The festival began back in 1976 to celebrate the bicentennial, with the decision that a town named in honour of the Wilcox twins set aside one day to celebrate twins each year. It has since attracted more than 80,000 twins and multiples over 47 festivals.

For three days, pairs of identical twins, dressed the same, roam around the town to gather and bond over their twin-ness. The event is also a magnet for researchers — a potential treasure trove of human data for scientific study.

“It’s amazing to see so much support from other twins,” said Marko. “It’s a little bizarre to see how many twins really exist around the world … to come together like this every year.”

“They all unite as one,” Nico continued. “So it’s pretty cool to see that bond between everybody here. It’s really cool to be part of that.”

This year, the final count of registered twins and multiples was 2,145, but that doesn’t include many more who come but are not counted. Organizers estimate that somewhere between 20,000 and 30,000 people in total attend the festival.

“It spotlights the city of Twinsburg, where we would probably never get that kind of recognition,” said Twinsburg Mayor Sam Scaffide.

A ‘gold mine’ for scientific research

The festival also offers a unique scientific opportunity for researchers to gather subjects with identical DNA in order to learn whether certain conditions are influenced by genetics or environmental factors.

Researchers set up tents on the festival grounds, where twins can volunteer to be tested. This year included researchers from the Monell Chemical Senses Center in Philadelphia, biometric researchers from West Virginia University and the dermatology department of the nearby University Hospitals in Cleveland.

“We can ask some questions about skin diseases. This year we’ve got some focused on reactions to COVID vaccinations and COVID illness,” said Tyler Coleman, a researcher from University Hospitals.

Researcher Alison Treichel, also from University Hospitals, said the Twins Day festival really is a “gold mine” for research subjects.

“It’s a really unique opportunity. Probably one of the only places in the world where you have this amount of twins coming and gathering in one place from all over the world.”

The makeshift research centre, along with most of the Twins Day events, is held at the town’s Glen Chamberlin Park, which is transformed into a mini fair with food stands and booths, along with activities, such as a twins talent show and volleyball tournament.

Contests include awards for the twins who travelled the longest distance to attend. While the majority of twins come from the U.S, the festival also has an international reach. This year twins from as far away as Spain, Japan, Iceland, Syria, Sweden and Africa attended.

“I read about it maybe 20 years ago when I was on vacation in Australia. And then I talked to my twin sister Anno and we decided after we’ve been thinking about it many times and decided that this year [we would attend] because we turned 40,” said Ulrika Carlstedt Jönsson, from Stockholm.

“It’s overwhelming and amazing and crazy and lovely.”

The highlight of the festival is arguably the Double Take Parade. It draws hundreds of spectators, who set up their lawn chairs along each side of Ravenna Road, the town’s main strip, to watch a sea of twins march through the city.

This year the theme was “Welcome to the Jungle,” meaning not only were more than 2,000 sets of twins descending on Twinsburg, but many were dressed in tiger- like costumes or safari gear.

“Walking down that parade route is almost like walking in the Macy’s Day Parade,” said Steve Nagel, who drove from Dayton, Ohio. “Those people, I mean, the fact that they come and line the street for us is just amazing.”

He and his brother Jeff have been coming for 34 years, and the fellow twins they’ve met have become like family, they said.

“Why not have a weekend to celebrate something that you can’t buy?” said Steve Nagel.

“It’s something we were just born into, and to be able to celebrate that with everybody else has just been something we look forward to every year.”

A chance to bond with other twins

It’s certainly a unique opportunity for twins and multiples to meet, take pictures with other twin sets, swap fun twin stories, and bond.

“I think we come to be with like-minded people. Because when you walk in here, all you see is us, doubles and triples,” said Keith Wells, 59, from Maryland, who came with his brother Kevin.

“We can all relate to life. I mean, just about everything we can relate, no matter how old, small, young. It doesn’t matter. We all can relate.”

It’s also a way to learn about the experiences of others. Many in the festival identify themselves as either Twin A or Twin B — Twin A being the older sibling — and usually just by minutes.

“I’m kind of asking, ‘Who’s the more talkative one, the more outgoing one?'” said Joni Grant, the older twin sister of Jamie Drapel, from Lincoln, Neb.

Nagel said he will ask questions to compare single twins to married, and to find out how their spouse accepts it, and whether their kids think they have two dads or two moms.

“It’s really kind of amazing because where else can you find this wealth of knowledge? It’s not somebody who’s just telling you what they think. These people have felt it. They’ve lived it,” Nagel said.

“We always say when we drive home, we’re like, ‘Oh my God, we’re really normal here.’ We thought we were like these freaks and all these other twins kind of experience the same thing we have throughout our lives.”