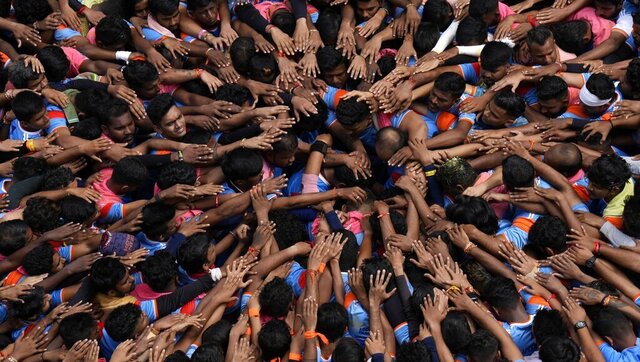 According to the municipal body, while most of them were discharged after treatment, 23 participants were admitted to hospitals and their condition was said to be stable

People pray before forming a human pyramid to break the “Dahi handi,” an earthen pot filled with curd, as part of celebrations to mark Janmashtami festival in Mumbai, Friday. AP

New Delhi: As many as 111 ‘Govindas’ or Dahi Handi participants were injured while forming human pyramids during Krishna Janmashtami celebrations in Mumbai on Friday, according to the Brihanmumbai Municipal Corporation (BMC).

According to the municipal body, while most of them were discharged after treatment, 23 participants were admitted to hospitals and their condition was said to be stable. Thirty persons were treated at the civic-run KEM hospital, followed by 12 at GT Hospital, 11 at Nair hospital and 10 at Rajawadi hospital, among others.

“No untoward incident has been reported,” said BMC.

The state government had last month announced that there would be no restrictions on celebrating religious festivals, including Dahi Handi and Ganesh Chaturthi, this year.

Dahi Handi which is a part of the Krishna Janmashtami festival was celebrated in Mumbai after a hiatus of two years owing to the pandemic.

Maharashtra chief minister Eknath Shinde on Thursday informed the state legislative Assembly that the government has decided to accord adventure sport status to Dahi Handi. As a result of the adventure sport tag, young participants will be eligible to apply for government jobs under the sports quota.

In addition, compensation will be provided to participants or their families if they suffer injuries while forming human pyramids and government hospitals were instructed to treat injured ‘Govindas’ free of charge.