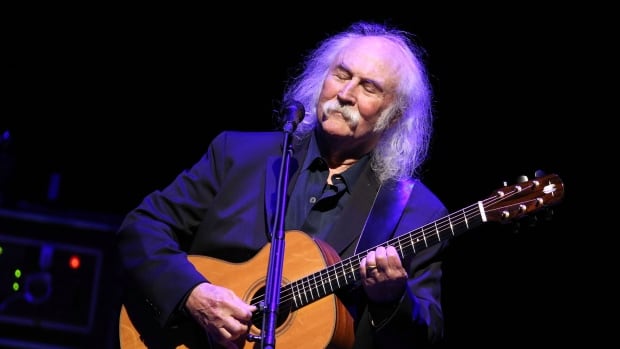 David Crosby, whose soaring harmonies with two different iconic bands elevated him to musical stardom in the 1960s even as his famously volatile temper often fractured relations with his bandmates, has died at the age of 81, his family said.

A statement from Crosby’s wife released to Variety magazine confirmed the musician’s death “after a long illness” and said that he had died “lovingly surrounded by his wife and soulmate Jan and son Django.”

In a career extending six decades, Crosby first spent three years with the Roger McGuinn-led Byrds, who scored No. 1 hits in the mid-60s with Mr. Tambourine Man and Turn, Turn, Turn.

Soon after he joined up with Stephen Stills, Graham Nash and, on occasion, Neil Young. Both configurations yielded mellow hits like Teach Your Children, Just A Song Before I Go and Wasted On the Way, as well as impassioned protest fare such as Wooden Ships, Almost Cut My Hair and Ohio.

Crosby also released eight solo albums, beginning with the acclaimed If I Could Only Remember My Name in 1971 and as recently as 2021’s For Free.

Crosby, more often than not sporting a walrus mustache, built a reputation over his career as one of rock’s most colourful characters, a hedonistic connector of the artists who lived and amassed in the Laurel Canyon area of Los Angeles in the late 1960s and early 1970s.

“I couldn’t shake the guy from my mind,” Nash recalled of an early meeting, at the house of Cass Elliott of the Mamas and Papas, in his 2013 book Wild Tales: A Rock & Roll Life. “He was such a free spirit, so irreverent … the energy he put out was incredible.”

Also, Nash noted, Crosby “had the best dope in Hollywood.”

Crosby proselytized to his famous friends about a young Canadian singer-songwriter he’d seen, Joni Mitchell, and dated her for a time as her career ascended.

However, he could exasperate bandmates with his​ undisciplined, opinionated ways. The ​Byrds fired him from the band and he burned bridges with his Crosby, Stills, Nash & Young partners near the end of his life.

“David had become insufferable,” McGuinn said in the Cameron Crowe-directed documentary on Crosby’s life, 2019’s Remember My Name. “He was hard to hang out with.”

Crosby admitted to having a volcanic temper and lamented the bridges burned in the same documentary.

“I still have friends, but all of the guys I made music with won’t even talk to me,” he said. “One of them hating my guts could be an accident. But McGuinn, Nash, Neil and Stephen all really dislike me, strongly.”

Crosby was also at a loss to explain how he had not become another young rock and roll casualty, with indulgences threatening to overcome him in the 1970s and 1980s.

He was arrested multiple times for drugs and weapons offences and served a prison sentence, while in the 1990s the accumulated toll on his health necessitated a liver transplant.

Crosby was born Aug. 14, 1941 in Los Angeles, to a mother he described as doting and a father — Oscar-winning cinematographer Floyd Crosby — he found distant. Not an academic, Crosby found expression on stages, trying both acting and music.

After some earlier, unsuccessful attempts to establish himself as a folksinger, Crosby met McGuinn and early Byrds songwriter Gene Clark, with Michael Clarke and Chris Hillman also joining.

The Byrds electrified the songs of Bob Dylan and Pete Seeger alongside their original material, hailed in their evolving career as being pioneers of folk-rock and country-rock.

I don’t know what to say other than I’m heartbroken to hear about David Crosby. David was an unbelievable talent – such a great singer and songwriter. And a wonderful person. I just am at a loss for words. Love &amp; Mercy to David’s family and friends. Love, Brian <a href=”https://t.co/Hjht7LeGiv”>pic.twitter.com/Hjht7LeGiv</a>

Crosby contributed the songs Ladyfriend, Why and Draft Morning to the band’s catalogue but was shown the door in 1967, not long after angering his bandmates with an off-the-cuff onstage rant about the John F. Kennedy assassination at the 1967 Monterey Pop festival.

He more than landed on his feet the following year by joining Nash of Hollies fame and Stills from the defunct Buffalo Springfield.

The debut album of Crosby, Stills & Nash in 1969 was one of the iconic albums of its era, with Crosby earning songwriting credits on Wooden Ships, Long Time Gone and Guinnevere to go along with the smashes Suite: Judy Blue Eyes and Marrakesh Express.

The trio performed just their second-ever gig in front of hundreds of thousands at Woodstock in August 1969.

“We’re scared shitless,” Stills said from the stage by way of intro.

In order to augment their stage act, Young was invited and reunited with his former Springfield bandmate Stills as a result.

Crosby wrote the title track to the quartet’s 1970 smash Déjà Vu, which included the hits Teach Your Children, Our House and Helpless. The recording was a gut-wrenching affair for him, as his girlfriend, Christine Hinton, had been killed in a car accident in September 1969.

“Crosby was forever the catalyst, always intense, driving us further and further,” said Young. “Just looking in those eyes made me want to deliver from the heart.”

RIP David Crosby<br>I was just listening to CSN the other night and was always blown away by his voice and sense of harmony. Huge loss RS <a href=”https://t.co/gA31oyB8v6″>pic.twitter.com/gA31oyB8v6</a>

CSNY embarked on one of rock’s earliest stadium tours in 1974, and without Young recorded the well-received CSN album in 1977, featuring the top 10 hit Just A Song Before I Go.

But Crosby was soon on a downward spiral, with Timothy B. Schmit singing the part meant for him on the 1982 single Wasted on the Way.

“When he started to take a dive it was terrible to see. There was nothing we could do to stop him,” wrote Young in his 2012 book, going on to describe an incident on an otherwise idyllic sailing excursion where Crosby felt the compulsion to freebase cocaine.

Revelations, honours in the ’90s

Crosby, wan and severely overweight, was sentenced to five years in prison in 1983, his lawyer unsuccessfully arguing he was in illegal possession of a gun because of fears for his safety after John Lennon’s assassination three years earlier.

Crosby ultimately served seven months behind bars before moving to a halfway house, years later saying prison “saved my life,” along with his 1987 marriage to wife Jan and subsequent drug recovery meetings. He would also form a bond and a professional relationship as a musician with an adult son, James, whose existence he had been unaware of until the 1990s.

The Byrds were inducted into the Rock & Roll Hall of Fame in 1991, with Crosby, Stills & Nash getting that same honour six years later.

“For a guy who was supposed to be dead a couple years ago, I’m doing pretty well,” Crosby said at the latter ceremony.

Meanwhile, it was learned a few years later, Crosby had been the sperm donor for two children born in the 1990s to singer Melissa Etheridge and her then-partner Julie Cypher.

I am grieving the loss of my friend and Bailey’s biological father, David. He gave me the gift of family. I will forever be grateful to him, Django, and Jan. His music and legacy will inspire many generations to come. A true treasure. <a href=”https://t.co/1e0vbvd2SN”>pic.twitter.com/1e0vbvd2SN</a>

CSNY had released albums in 1986 and 1999 that had received a muted response.

The group’s 2006 Freedom of Speech tour came at a time of heightened passions over the U.S. military operation in Iraq. While most fans welcomed them back, Nash later wrote in his book it was also the first time the group “experienced people walking out of a CSNY concert” due to politics.

While Crosby collaborated in more recent years with artists such as Jason Isbell, Jonathan Wilson and John Mayer, his old friends swore off rejoining.

Grateful for the time we had with David Crosby. We’ll miss him a lot.

Crosby was caught publicly disparaging Young’s wife, actor Daryl Hannah, who had a tumultuous end to her relationship with Crosby’s friend, Jackson Browne. Nash commented soon after in an interview that Crosby had “tore the heart out of CSN and CSNY” as a result.

He continued to be up for benefits for a host of environmental and charitable causes, and lent his name to a marijuana business venture.