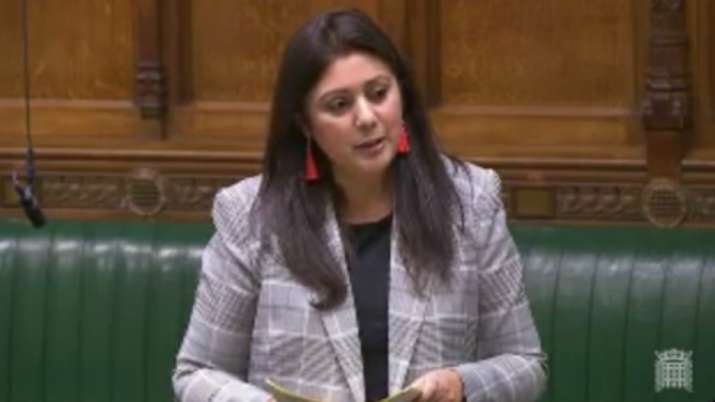 A British lawmaker of Pakistani origin on Sunday alleged that she was sacked from a ministerial role in the Conservative Party government in February 2020 because of her “Muslimness”.

Nusrat Ghani, 49, was appointed to a junior ministerial post at the UK’s Department for Transport in 2018 under former Prime Minister Theresa May. But she lost that job in a reshuffle by Prime Minister Boris Johnson’s government in February 2020, a move she told ‘The Sunday Times’ was attributed to her Muslim faith.

“At the post-reshuffle meeting with the whips I asked what the thinking was behind the decision to fire me… I was told that at the reshuffle meeting in Downing Street ‘Muslimness’ was raised as an ‘issue’, that my ‘Muslim woman minister’ status was making colleagues uncomfortable and that there were concerns ‘that I wasn’t loyal to the party as I didn’t do enough to defend the party against Islamophobia allegations’,” Ghani told the newspaper.

“When I challenged whether this was in any way acceptable and made clear there was little I could do about my identity, I had to listen to a monologue on how hard it was to define when people are being racist and that the party doesn’t have a problem and I needed to do more to defend it. It was very clear to me the whips and No 10 were holding me to a higher threshold of loyalty than others because of my background and faith,” she said.

The Chief Whip of the Conservative Party, Mark Spencer, said in a statement on Twitter that Ghani’s claims were “completely false”.

“To ensure other whips are not drawn into this matter, I am identifying myself as the person Nusrat Ghani MP has made claims about,” said Spencer.

“These accusations are completely false and I consider them to be defamatory. I have never used those words attributed to me. It is disappointing that when this issue was raised before Ms Ghani declined to refer the matter to the Conservative Party for a formal investigation,” he said.

“I provided evidence to the Singh Investigation into Islamophobia which concluded that there was no credible basis for the claims to be included in the report,” he added.

The independent inquiry led by Indian-origin academic Professor Swaran Singh, referred to by Spencer, was set up by Prime Minister Johnson on whether the Tory party he leads has procedures in place to tackle discrimination, including allegations of Islamophobia. It concluded in May last year that anti-Muslim sentiment remains a problem within the party.

“Judging by the extent of complaints and findings of misconduct by the Party itself that relate to anti-Muslim words and conduct, anti-Muslim sentiment remains a problem within the Party. This is damaging to the Party, and alienates a significant section of society,” Professor Singh’s report noted at the time.

Ghani claims that her own experience has shaken her faith in her party.

“I have at times seriously considered whether to continue as an MP. However, I will not let them win and force me out of politics. I have also been concerned at the consequences of this coming out for my security and that of my family, but I always knew there would be a time when I had to explain what happened to me,” she said.

Nadhim Zahawi, the UK Education Secretary of Iraqi origin, took to Twitter to say there was “no place for Islamophobia or any form of racism” in the Conservative Party, adding that the allegations had to be “investigated properly and racism routed out”.

Speaking to ‘Sky News’ on the issue, UK Justice Secretary Dominic Raab said the allegations were “extremely serious” but denied the need for a formal investigation unless Ghani made a formal complaint.

Ghani’s allegations come in the midst of pressure on Johnson’s leadership over alleged lockdown breaching parties at Downing Street.

They also come in the wake of claims by senior Conservative backbencher William Wragg that Downing Street tried to “blackmail” MPs seeking to oust Johnson over the issue. Wragg has said he will be speaking to a Metropolitan Police detective in the House of Commons next week.

Meanwhile, senior civil servant Sue Gray is expected to report on her internal investigation into the alleged parties in UK government offices during the first two waves of the pandemic next week.

Texas: 18-year-old gunman warned online he was going to shoot up school