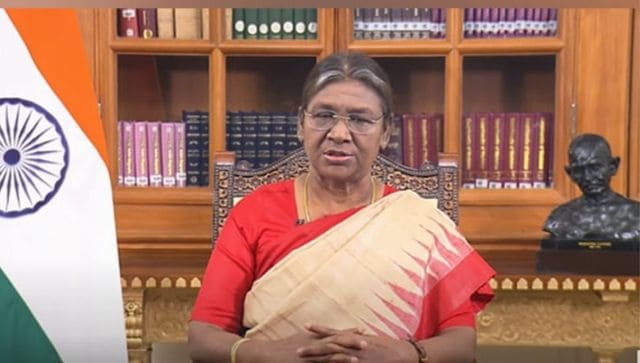 President Droupadi Murmu addresses the nation on the eve of the 74th Republic Day of the country. ANI

New Delhi: In her first address as India’s President on the eve of Republic Day on Wednesday, President Droupadi Murmu has said that every Indian citizen has ample reason to be proud of the achievements of the country and what the world knows as the “Indian story”.

President Murmu extended greetings to the people of the country on the eve of the 74th Republic Day and said that it was a celebration of what generations of Indians had achieved together as a nation.

Calling India home to one of the oldest living civilisations in the world, the President said, “On the eve of the 74th Republic Day, I extend my heartiest greetings to every Indian, at home and abroad. From the day the Constitution came into effect to the present day, it has been an amazing journey that has inspired many other nations. Every citizen has reason to be proud of the Indian Story. When we celebrate the Republic Day, we celebrate what we have achieved, together, as a nation.”

President Murmu said India had succeeded as a democratic republic because so many creeds and languages “have not divided us but have united us” throughout the nation’s rich and chequered history.

On the eve of Republic Day, she reminded people that India has often been called the “mother of democracy” though as a modern Republic, India is still relatively young compared to other nations.

“India is called the mother of democracy. In the early years of Independence, we faced countless challenges and adversities. Very high levels of poverty and illiteracy were just two of the many ill-effects of the long foreign rule. Yet, the spirit of India was undeterred. With hope and confidence, we began an experiment unique in the history of humankind,” the President said.

“Such a vast and diverse multitude of people coming together as one nation remains unprecedented. We did so with a belief that we are, after all, one; that we are all Indians. We have succeeded as a democratic republic because so many creeds and so many languages have not divided us, they have only united us. That is the essence of India. That essence was at the heart of the Constitution, which has withstood the test of time,” she said in her address.

She also invoked Mahatma Gandhi—the Father of the Nation and the struggle for India’s Independence he led in a non-violent manner. “The national movement, led by Mahatma Gandhi, was as much about winning Independence as about rediscovering our own ideals,” she said. The President said those decades of struggle and sacrifice helped India win freedom not only from colonial rule but also from the imposed values and narrow world-views.

President Murmu said a long and profound process eventually culminated in the Indian Constitution. “Our founding document is inspired by the humanistic philosophy of the oldest living civilisation in the world as well as new ideas that emerged in more recent history.”

She added that the nation will always remain grateful to Dr BR Ambedkar, who headed the Drafting Committee of the Constitution, and played a crucial role in giving the Constitution its final shape.

She concluded her address by once again reminding citizens of the sovereign Republic of India about the vision that the founding members of the Drafting Committee of the Constitution had for the future of the nation.

“Their vision, as enshrined in the Constitution, has been continuously guiding our Republic. During this period, India has been transformed from a largely poor and illiterate nation into a confident nation marching on the world stage. This would not have been possible but for the collective wisdom of the Constitution-makers guiding our path,” she said.

President Murmu said while Babasaheb Ambedkar and his colleagues had given the map and a moral framework yet, “the task of walking that path remains the responsibility of Indian citizens.”